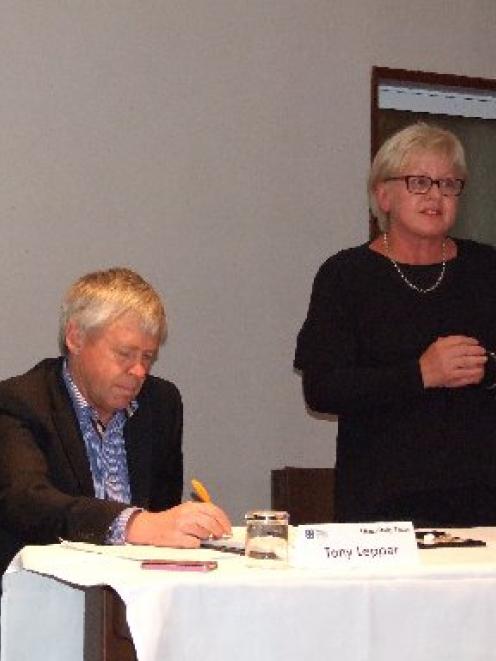 Central Otago mayoral candidates, incumbent Tony Lepper and challenger Lynley Claridge, on the campaign trail. Photo by Lynda van Kempen.
Merging with the neighbours, buying a $40,000 ''frock'' collection and whether Cromwell's growth was at the expense of Alexandra were all canvassed during a Central Otago mayoral forum in Alexandra last night.

The event was organised by the Otago Chamber of Commerce in conjunction with the Otago Daily Times and attracted an audience of about 30.

Peter Hishon, of Earnscleugh, queried the council's purchase of the late Eden Hore's fashion collection of more than 220 garments, mostly from the 1970s, collected by the Naseby farmer.

''It was a Maniototo asset and it was deemed it should stay in Central Otago - if we didn't step in and buy it, it would have gone to Wellington; we had to secure it pronto,'' Mr Lepper said.

Mrs Claridge agreed with buying the collection, ''but not the way it was done''. The Central Lakes Trust should have been asked for the funds to buy it, she said.

Both mayoral candidates opposed any suggestion the district should merge with the Queenstown Lakes district. Mr Lepper said it was ''not on our radar'' and any proposal would have to be driven by the residents of this district.

''I don't see any financial benefit to us from amalgamating,'' Mr Lepper said. Mrs Claridge said if amalgamation was forced upon Central Otago, it would have more in common with Wanaka than the rest of that district.

The candidates disagreed on whether Cromwell had prospered at the expense of Alexandra. Mrs Claridge said she believed businesses had been ''directed'' to Cromwell rather than Alexandra, but Mr Lepper said there was ''no council policy that sent people to Cromwell instead of Alexandra.

''Cromwell has grown at the expense of no-one. It's sucked people out of the rest of New Zealand, not from within Central Otago.''

The duo also clashed on the topic of development contributions. Mr Lepper said if developers did not pay to cover the cost of extra stress on roading and infrastructure from their development, then the cost would fall on ratepayers.

Mrs Claridge said the contributions were ''killing'' development and rates relief should be offered as an incentive to developers. The district could not afford to lose any development proposals.

If the council had the infrastructure in place, development proposals would follow, Mr Lepper said.

''And we're talking to businesses all the time - like Tuapeka Gold, for example, who are considering shifting out of Lawrence. But then, if we steal Tuapeka Gold, where does that leave Lawrence,'' he said.

A mayoral forum earlier in the day, at Cromwell, was called off. As of yesterday afternoon, 27.7% of a total 13,929 Central Otago voters had returned their election documents.

The percentage is slightly down on last year when 34% of votes had been returned by this stage.