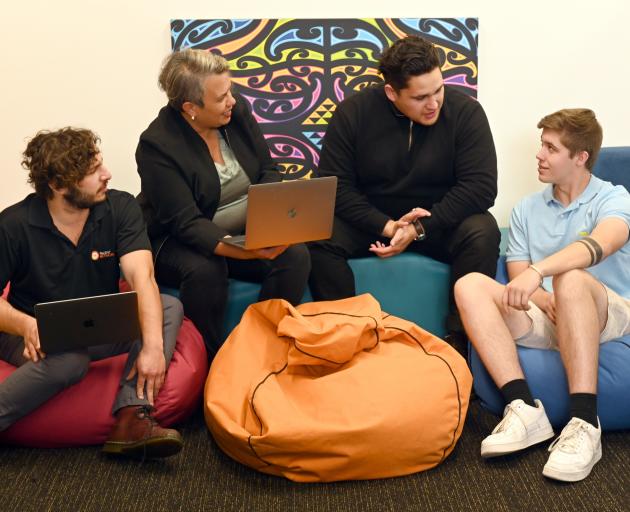 A visibly proud Heidi Renata, founder of Dunedin’s Innov8HQ, was referring to young people deciding what path to take in life.

Ms Renata launched a youth entrepreneurship programme called Mana Rangatahi 18 months ago, aimed at people aged between 16 and 24, to inspire change in the business world.

The 12-week programme was based on applying matauranga Maori principles, critical thinking and resilience based activities for the modern work environment for youth living in Dunedin, Ms Renata said.

"It takes a whole person approach and focuses on re-establishing life skills and aligning them with life, career ambitions and related skill pathways," she said.

After a life in the corporate world working for Vodafone, Ms Renata founded Innov8HQ, a business hub and collaborative work space.

She describes it as a "business marae" with the purpose of connecting, resourcing and supporting people.

The programme, which is run in the Innov8HQ space, was built in partnership with the Ministry for Youth Development.

Over the 12 weeks, the students were placed into real world experiences and workplaces, community projects and initiatives with local leaders and experts, as well as drop-in clinics.

More than 65 young people have been through the programme over the last 18 months and so far 40% have started their own businesses, 50% have gained full time employment and the remainder have gone on to further training.

Ms Renata said Mana Rangatahi was built on the Maori philosophy of "Ko wai au?" o r "Who am I?"

"And that is an ongoing thing, so we built the programme to get them to familiarise themselves with where they came from and how that will give them a foundation to, one, starting their own business, two, looking for fulltime employment, or three, on to further training," he said.

One of the founding students, Mitchell Porter-Thomas found the programme through a Facebook post after lockdown and knew it was for him.

Mr Porter-Thomas was a salesman at a department store in Dunedin and said he was "a bit stale".

"I’d been there for a while and I was bored and I’d stopped moving moving forward," he said.

Mr Porter-Thomas had a year doing a various jobs for temp agencies before "stumbling across" Ms Renata’s video on facebook promoting Mana Rangatahi.

"She was calling all 16 to 24-year-olds who were interested in business to come along and have a hui.

"When I was watching this video, I thought she is talking to me," he said, laughing.

Life took a different direction from there, Mr Porter-Thomas said.

After completing the programme, he now works as a recruitment consultant at business based at Innov8HQ.

" I’ve had some cool things come my way, just from being round the right people," he said.

Ms Renata said she would love to expand the programme to other regions.

"I think there is a real need because of what it does for our rangatahi.

"So we empower them by sitting and guiding them through a process for them to become leaders of the future," Ms Renata said.