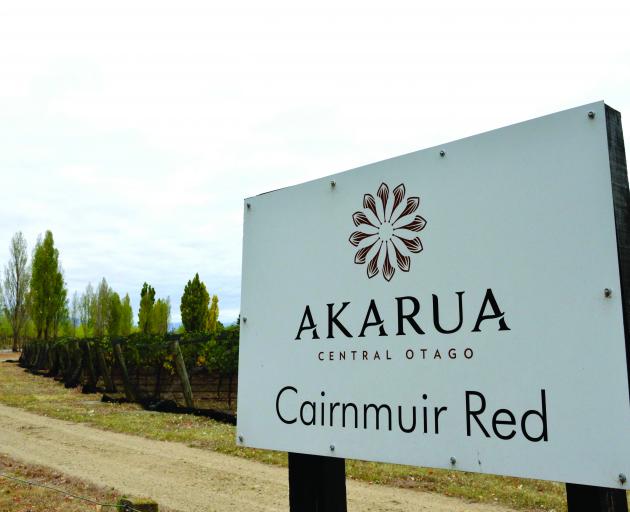 The gateway to Akarua’s Cairnmuir Rd vineyard. PHOTO: SUPPLIED
A Central Otago wine producer has signed a deal to sell part of its operation to a well-known French wine brand.

Akarua Ltd has entered into a conditional deal to sell nearly 52ha of land, in Cairnmuir Rd, Bannockburn, to Marlborough-based Rimapere Vineyards Ltd, which is owned by Edmond de Rothschild Heritage.

Akarua, which is owned by The Skeggs Group, was started by former Dunedin mayor Sir Clifford Skeggs in 1996.

The group will retain its five other vineyards in Bannockburn and Pisa and ownership of the Akarua restaurant and cellar door in Arrowtown.

The Skeggs Group managing director David Skeggs said the family recently reviewed its investment portfolio, which resulted in the rationalisation of the vineyard.

The price of the sale was confidential.

"The family remains very committed to the Central Otago wine industry," he said.

He believed the sale was a testament to the hard work of staff and distributors in building the Akarua brand to a position where it had attracted the attention one of the world’s most prestigious wine families, Mr Skeggs said.

Edmond de Rothschild Heritage was started by the Rothschild family in 1868 and has nine vineyards in five countries.

The sale was subject to approval by the Overseas Investment Office.