It weighs in at 22 tonnes and can move as much as 50 tonnes of rock per load.

As such, it was likely this newspaper's biggest scoop.

It is also one of the world's largest, and pairs up with the largest excavator in the Oceana Gold fleet, able to load a 200-tonne payload haul truck in just a few passes.

Or about 30 million tonnes of waste rock a year.

It is also pink, in support of the Pink Ribbon appeal. 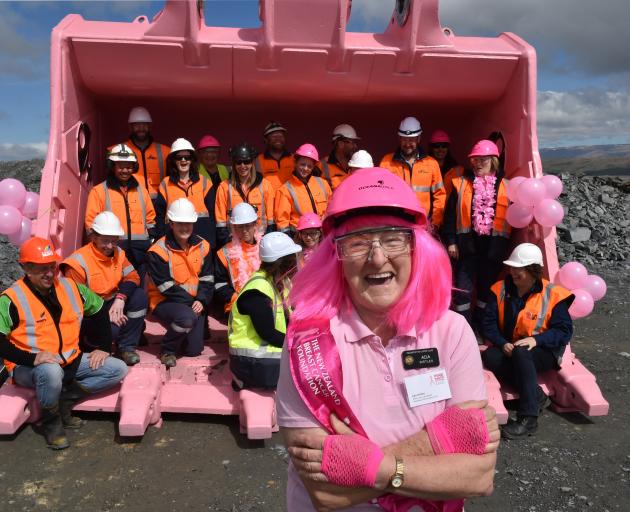 Ada Birtle, of the Palmerston Lions Club and Pink Ribbon appeal, with 22 engineers, painters and miners who squeezed into a 22-tonne digger bucket at Macraes Goldfield. Photo: Gregor Richardson
The idea to paint the massive digger bucket came from Site Weld owner Adrian Olsen, a contractor for Oceana Gold.

''After refurbishing the bucket, we thought it would look good in pink,'' he said.

Between the sponsors - including Oceana Gold, Dunedin-based Site Weld and Integrated Mechanics - they raised $5000 for the Breast Cancer Foundation NZ.

''It's a heavy industrial paint and will last for a while, at least on the outside,'' he said.

Regardless, the cancer foundation was tickled pink.