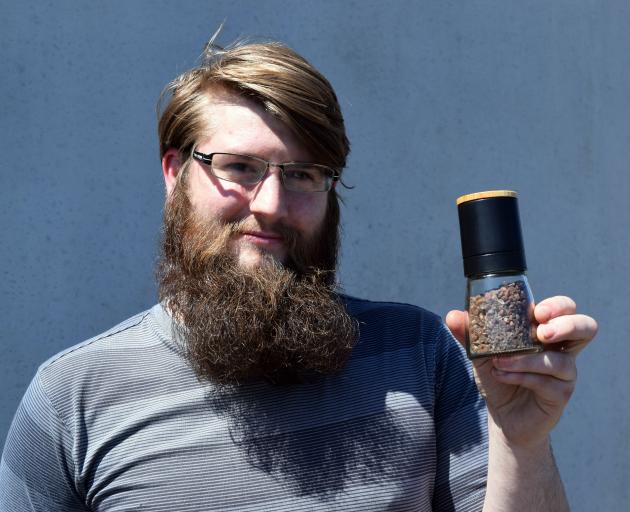 Otago Polytechnic student Jonathan Storm is developing a range of wood-smoked rock salt and liquid smoke. PHOTO: SHAWN MCAVINUE
For Startup Dunedin's Audacious latest nine-week programme, University of Otago and Otago Polytechnic students take an idea to solve a problem and make it a business.
In a series, business reporter Shawn McAvinue talks to students who won prizes for their ideas. This week, he talks to Jonathan Storm (28), of Glenross, about his wood-smoked rock salt and liquid smoke business, Smokebox Salts.

Jonathan Storm is a busy man.

In between working full-time as a quality officer at United Machinists in central Dunedin, he studies mechanical engineering part-time at Otago Polytechnic and develops a product range for his business Smokebox Salts.

As part of research and development, he has been trialling 25 different types of sawdusts to smoke rock salt.

"I’m focusing on small batch production in a wide range of flavours."

If he had to present his product in a dragon’s den situation, he would smoke rock salt using his "wood-carver’s blend" of sawdust, which was made from a blend of three woods, kopi, manuka and pohutukawa.

He would then grind the salt on a poached egg for the judges to eat.

The blend had different stages of flavour, including sweetness from the pohutukawa and saltiness from the kopi, he said.

After research and development was complete, the plan was to release a range of about a dozen smoked rock salts on the market.

He was also developing a "liquid smoke" product, where he condenses the moisture from the smoke vapour.

The liquid could be added to foods, such as marinades, to give a smoky flavour without needing to smoke it.

At the polytechnic, he was developing a liquid smoke condenser.

In a prototype condenser, he had made trial batches of liquid smoke.

He was continuing to develop the condenser to increase the liquid yield by increasing the ambient humidity in its main smoke chamber.

Word of his smoked salts had spread.

The owner of an Australian catering company, which owned 18 semi-trailer trucks loaded with barbecue equipment, had tried some of the smoked rock salt.

"He was quite pleased."

The dream for Smokebox Salts was big, but when the range was released he would initially target shoppers at Otago Farmers’ Market and boutique food shops.

Smokebox Salts won the Brass Tacks Award of $500 cash for being the business idea most likely to generate revenue on launching.