Buoyant through the changing tides

Undeterred by the 2007-09 global financial crisis, Port Otago has successfully navigated its way through tough times to deliver 100% owner the Otago Regional Council more than $50 million in dividends during the past five years alone. Port Otago has been chosen as the Otago Daily Times Business of the Year. Simon Hartley talks to Port Otago chief executive Geoff Plunket about its performance and contribution during the past decade. 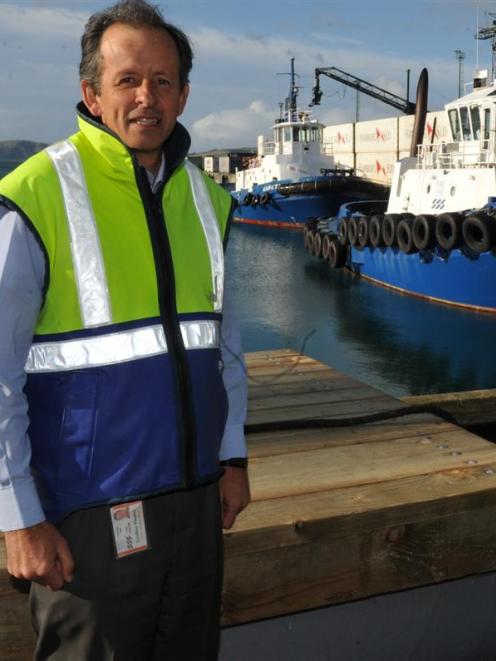 Port Otago's Geoff Plunket in front of the Ports tug Otago. Photo by ODT.
Port Otago goes into 2015 in fine financial shape, with tens of millions of dollars in development under way, staff numbers increasing and the company optimistic about new developments.

Its subsidiary Chalmers Properties, which oversees a portfolio valued at $260 million, has $20 million to invest, and a separate ''inland port'' at Mosgiel could be up and running by 2017, as could more Sawyers Bay warehousing - all in all, an average annual capital expenditure of $10 million for each year over the next decade.

Few companies can boast of recently completing about $100 million in capital expenditure on a range of operations ashore, then finding itself in an almost debt-free position while paying large, and special, dividends to shareholders.

Port Otago has delivered $50.1 million in dividends to the ORC during the past five years, of which $15 million, or 30%, was special dividends. Since 1988, the running dividend total has hit almost $134 million.

The global financial crisis left few companies unscathed, but Port Otago's chief executive, Geoff Plunket, said the company was ''in good shape'' going into the GFC, with a range of diversified businesses alongside its port operations.

''Unfortunately, we did have to carry out some restructuring within the container operations to adjust to changing trade patterns. [However] within the business we also concentrated on providing great customer service, lifting productivity and improving safety,'' Mr Plunket said.

Chalmers Properties started the GFC with a good portfolio and with a good range of tenants, plus Port Otago recently made some changes in Chalmers which centralised its management activities back to Port Chalmers.

Port Otago's ability to clear its balance sheet of debt derived from it purchasing a takeover-blocking 15% stake in rival Port of Lyttelton, which it later sold for a premium.

Lyttelton is now 100% owned by the Christchurch council, and looking to sell some part to raise cash for the Canterbury rebuild, but Mr Plunket said Port Otago was not considering another foray against its northern neighbour.

He described Port Otago's Next Generation project, the deepening and widening of the shipping channel from Port Chalmers to Taiaroa Head, as ''important, but only one aspect of the ongoing port development''.

Container vessels continue to increase in size, and Mr Plunket expected that to continue. Port Otago has always been able to handle the largest vessels.

''We will continue to develop the port to ensure that Port Chalmers maintains its position as a key New Zealand international gateway port,'' he said.

Development of the port will continue, including a 135m wharf extension costing up to $15 million, a $10 million-$12 million container crane to replace the last of the green Paceco cranes, and replacement straddle cranes, costing about $1.2 million each.

''I'd expect that capital expenditure will average around $10 million per annum over the next five to 10 years,'' Mr Plunket said.

Chalmers Properties has made bottom-line contributions to Port Otago's group result, albeit some are unrealised gains, and losses, on property valuations.

Mr Plunket said Chalmers, whose portfolio has a valuation of $260 million, would continue to invest and improve the existing portfolio, and complete its Hamilton commercial land development.

''While there will be some incremental growth in the value of the portfolio, we do not see any significant increase in the property portfolio.''

However, having sold an Auckland property and two Dunedin ground leases recently, Chalmers has $20 million available to invest, but Mr Plunket noted yields on A grade properties were low at present.

''We are looking for new acquisitions. We've made offers on a couple of Auckland properties which were not successful.''

Port Otago had completed the Chep development in Dunedin and is currently upgrading the Jade building on Birch St, with an eye to further developments in Dunedin, ''when opportunities present'', Mr Plunket said.

Some of the main challenges facing Port Otago include land use and also lifting productivity to manage extra volumes, Mr Plunket said.

''Over time, we will need to use the land area at Port Chalmers more efficiently to manage growing container and cargo volumes,'' he said.

A major project was just getting under way to develop a long-term plan for the Port Chalmers port area, Mr Plunket said.

For the forthcoming export season the container terminal would operate 24 hours, Monday to Friday, to receive export containers and complete daily container activity, where previously Port Otago only operated 24 hours per day for shipping exchanges.

In order to manage the extra activity, Port Otago had been gradually increasing staff levels and Mr Plunket expected they would increase from 290 to 305.

Port Otago had settled a three-year collective employment agreement, which would take company and employees through to mid-2017.

While Port Otago had a good safety record and focus within the business on safety, Mr Plunket said it always sought to improve safety.

Port Otago had room for second, 3700sq m, warehouse at Sawyers Bay and had prepared a preliminary design as ''an active project'' but, rather than ''build on spec'', it would prefer to find a tenant first.

On the proposed ''inland port'' near Mosgiel, he said more detailed design work would be completed during 2015 and having it operational by 2017 was ''realistic''.

''Following this, we will have some discussions with potential customers and with KiwiRail.''

He expected an initial container handling volume of 15,000-20,000 containers.

Mr Plunket said the dividend payment during recent years had ''generally'' been about 50% to 60% of the tax paid operating profit, and dropping the formal level would reflect the actual level of dividend payment.

''As a general rule a dividend payment of 50% of the tax-paid profit is appropriate for an infrastructure company.

''This leaves 50% of the profit within the business for reinvestment.''