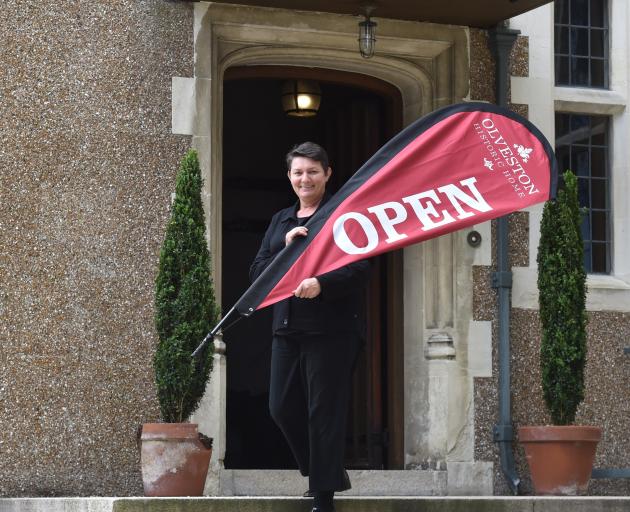 Olveston Historic Home manager Jan Davies says cruise and international visitors made up 80% of its business. PHOTO: GREGOR RICHARDSON
The absence of a cruise ship season in Dunedin this year, as well as other forms of international tourism, is causing a drop in revenue of up to 80% for some local businesses.

In a usual season, Dunedin and Fiordland receive about 115 cruise ships between October and March, but a ban on international cruise ships coming to New Zealand has cancelled that this year.

"We have lost the main part of our clientele, no two ways about it."

She said to try to make up for the loss of income from overseas tourists, they decided to offer Olveston as a venue.

They are running a murder-mystery night in December for local businesses’ Christmas functions, as well as other specialty tours.

"We’ve approached things differently. We are managing to keep ourselves afloat through the other initiatives we’ve got in place."

Sharon Hannaford said her two shops, the Scottish Shop and the New Zealand Gift Shop next to the Octagon, were being affected very differently.

"You can’t even compare the two," she said.

"[The gift shop] is doing probably a tenth of what it would have done ... from a cruise ship point of view."

The Scottish Shop had been more resilient, as Mrs Hannaford and her husband upgraded that store’s website and improved its online performance.

Mrs Hannaford said the Scottish Shop subsidising the NZ Gift Shop was the only way to keep the latter from having to shut permanently.

She was quietly hopeful they would lose just one cruise ship season.

"I certainly miss them for that. In a cruise ship day, I could sell 20 tea towels which would be good, because that would help pay the rent," Ms Elliot said.

"I don’t have that any more. New Zealanders are not that excited by tea towels."

She said the gallery had a better than normal winter season with an increase in domestic tourists visiting the town.

Union Co Cafe owner Peter Cole said the tourists did not matter too much to his business.

"We’re not too fussed about cruise ship passengers, to be honest," he said.

"The Australians, they get off and they’re desperate for coffee and they come running in."

He had noticed a lot more New Zealand travellers coming through.

"Port Chalmers is definitely on the map. If people are coming to Dunedin, it seems they want to come to Port Chalmers."

Port Otago chief executive Kevin Winders described his operation as a "small container business" and a "very good cruise business" built up over a number of years.

The ban on international cruise ships had curtailed that for this season, he said, but there was hope for a small number of New Zealand cruise ships in the new year.

The port company still had about 140 ship bookings on paper — cruises for this season including a handful that were cancelled at the end of last season when the pandemic began to take hold.

"We recognise it will be a tough summer for many businesses and while domestic visitation will only go so far to bridge the gap, we are working hard to attract as many Kiwis to the city as possible in the coming months, alongside national industry partners such as Tourism New Zealand and Air New Zealand.”

I do hope that businesses can adapt and move on from relying on such an environmental damaging industry. These floating cities can emit as much pollution as 700 trucks and as much particulate matter as a million cars. Air pollution including sulfur dioxide, nitrogen oxide, carbon monoxide, carbon dioxide, and hydrocarbons. It has been estimated that in the UK over 40,000 Britons die prematurely every year as a result of emissions from the shipping and cruise industries. A single large cruise ship will emit over five tonnes of NOX emissions, and 450kg of ultrafine particles a day. 3.5% to 4% of all climate change emissions come from maritime transport.
It doesn't stop there, Ballast water discharges, Noise pollution, Wildlife collisions, Oil spills, Solid waste, Bilge water, Waste water and Sewage all contribute to pollution and loss of biodiversity.
The pandemic has given us a great opportunity to transition away from such damaging industries, time to start taking the climate change emergency and mass biodiversity losses seriously.

We were told over and over what a financial boon these tourists were to Dunedin, which justified providing free car parks and toilet facilities, undermining local camping ground businesses, out of our rates.
I noticed my rates going up, never saw a cent in my pocket from these tourists. Now I see that the "millions of dollar added to the Dunedin economy" were going to a few tourist attraction providers, which is why the majority of us experienced only the mess and crowding of our lovely places, no benefits at all.