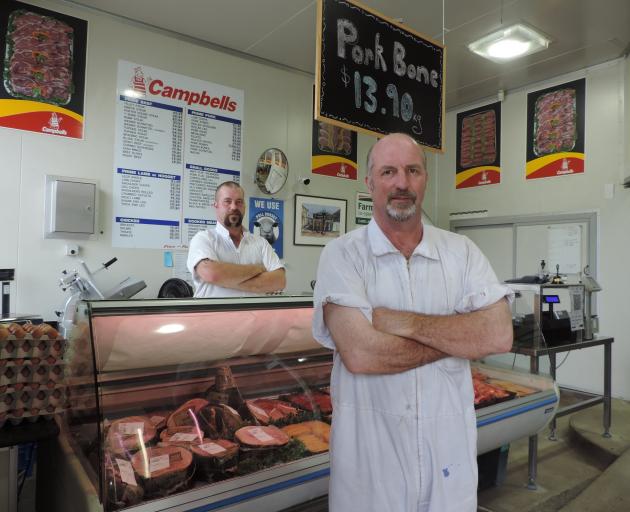 Jason (left) and Tony Campbell are the fifth and fourth generation of the family respectively to work at Campbells Butchery in Oamaru. PHOTO: KAYLA HODGE
It is a meaty piece of family history.

Oamaru’s Campbells Butchery has always been in the family and six generations of Campbells have been involved in the business over the past 109 years.

The business was started in 1912 by Robert Campbell and was taken over by Robert’s sons Laurie and Bruce, then by Laurie’s son Roy in 1975.

Roy’s wife Heather also joined the business, and his son Tony started working there in 1980 before taking it over in the 1990s.

Tony’s eldest son Jason started at the butchery in 2000, and last year Jason’s son Rayffe (13) started helping out after school.

In the ’80s, there were up to six Campbells working together — the most at any one time.

"It’s good. Not everyone gets the chance to be able to work with their family," Tony said.

Tony has seen many changes in the industry over the years.

In 1980, when he took over the business, there were 14 butcher shops in Oamaru. Of those 14, Campbells Butchery is the last one standing.

The business diversified throughout the years as the market changed, and now sent a large number of wholesale products throughout the lower South Island.

A trip to America a few years ago sparked the idea to create streaky bacon, and now the butchery is producing more than a tonne of it a week.

Its streaky bacon butties at the Oamaru Farmers’ Market had become a "massive hit" with locals and visitors, he said.

Haggis had also slowly taken off in the past couple of years, after Tony was approached to make it.

Now there are Scottish societies requesting it and the butchery has sent some as far as the North Island.

"Word of mouth has got around," Tony said.

It was loyal support from the North Otago community that Tony enjoyed the most about the family business.

"It’s meeting all the customers.

"Being a small town, everybody knows everybody — I quite like that."