CEO a man with a plan 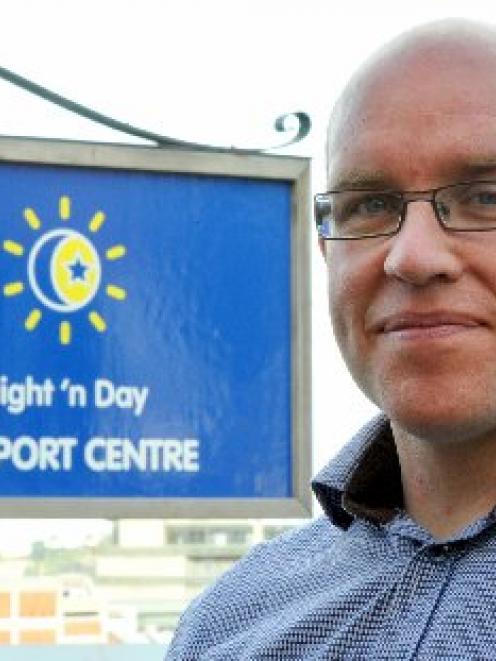 Night 'n Day Foodstore chief executive Tony Allison believes there are a lot of opportunities for the Dunedin-based company. Photo by Craig Baxter.
It takes a special kind of chief executive to want to parade up and down George St dressed in a bright blue morphsuit, promoting his business and engaging with customers.

But then, as Tony Allison, boss of Dunedin-based Night 'n Day Foodstore Ltd says, he's ''not your standard CEO''.

The story of Night `n Day has been one of remarkable growth. In October last year, the company was ranked fourth nationally in the annual Deloitte Fast 50 companies around the country, with 952% growth. It was also Otago's fastest-growing retail or consumer products business.

For Mr Allison - winner of this year's Otago Southland branch of the Institute of Directors' aspiring director award - joining the business was coming ''full circle''. He worked at Night 'n Day when he was both at school and university.

He has a strong family involvement with the business - the company's founders and directors, Andrew and Denise Lane, were his uncle and aunt.

A former head boy at King's High School, Mr Allison studied politics and accounting at the University of Otago before working for Deloitte in Dunedin for four years.

He then spent three years working in London where his main role was finance director of a law firm which comprised 75 partners and 500 lawyers.

While considered a mid-size firm for London, ''for someone from Dunedin it was quite big''. Hollywood stars were among the firm's clients and so he saw ''lots of famous people'' - ''you'd be sitting having a drink [and think] is that Kevin Spacey?'' - and also learned a lot.

But when he and his wife decided to start a family, they decided London was not the place to bring up children and returned to Dunedin, where they now have three young daughters.

Mr Allison spent six years commuting to Milton to work for Calder Stewart, a job he described as ''fantastic''. He started as finance director and worked through to chief operating officer.

When the position of chief executive at Night 'n Day was created, it ''made sense'' to join the family business in February 2012.

Mr and Mrs Lane have been retailing in the trade since 1978. In 1990, Night 'n Day Foodstore Ltd was established to begin converting existing foodstores and to offer a franchise system.

The chain began with outlets open on a 24-hour basis, seven days a week, in Dunedin, Christchurch and Invercargill, and from 7am to 11pm in Timaru and Nelson. There were now outlets throughout New Zealand.

Like Mr Allison's previous roles, the position did not previously exist. It was one he had to ''carve out''.

There were quite different dynamics coming into a business where a position was not established and he believed you had to ''work a lot harder'' to set the likes of boundaries.

Both he and Mr and Mrs Lane, the directors of the company, had their own areas in the business. His role, as chief executive, was performance.

He saw one of his strengths as being around strategy and planning and making sure the culture was sorted and everyone was ''on the same page''. His financial background and interest in marketing was also useful.

Mr Allison acknowledged the huge contribution that his aunt and uncle had made to the industry over three decades, while going about their work largely ''under the radar''.

The growth success story of Night 'n Day was no accident and it belonged to Mr and Mrs Lane - ''I came on the tail of that'' - and it was the result of ''hard work and bloody good planning''.

The business had grown organically since the first Night 'n Day store was established. Reaching ''that critical size'' was one of the reasons the chief executive position was established.

Family was important to Mr Allison - both at home and also the Night 'n Day network which he also described as family. Every decision he made was to benefit the franchisees.

Asked the secret to the company's success, he believed it was around adapting to the market.

''If we were just putting groceries on a shelf and trying to sell those, and competing against supermarkets, we wouldn't be here.''

The business had to be innovative, with the ability to change and be agile. It was also about the company's adage - ''we've got it when you want it''.

In terms of the convenience industry, particularly in the South Island, he believed Night 'n Day had ''a bit of a niche market'', with a format that worked.

In the North Island, Night 'n Day was rolled out at Gull service stations and while he would love to have some stand-alone stores, ''you've got to get it right''.

The company needed to consolidate and make sure the foundation was right, but there was definitely a path for growth. There was a lot of ''fill in'' to do in New Zealand and a lot of opportunities.

Asked whether there were plans to take the brand offshore, Mr Allison said: ''Could we go global? Yeah, we could. I'd have to be quite clear about why we would do that.

"We've set a target of filling in New Zealand with our brand . . . I wouldn't close it off, I'm not going global domination yet.''

Mr Allison had a plan in terms of what he would like to see happen with the business over the next few years.

Having a plan and a strategy was important to him, so when serious decisions had to be made, there was a reason and it was ''not just off-the-cuff''.

''I'm not really that way wired. I take what I do very seriously,'' he said.

Being on boards usually involved dealing with people who were ''really smart'' and interesting and who loved a challenge. He enjoyed ''soaking up all the learnings'' fellow directors could offer.

Mr Allison could not understand why more companies were not based in Dunedin, saying there were ''really smart people'' in the city, along with the resources and infrastructure.