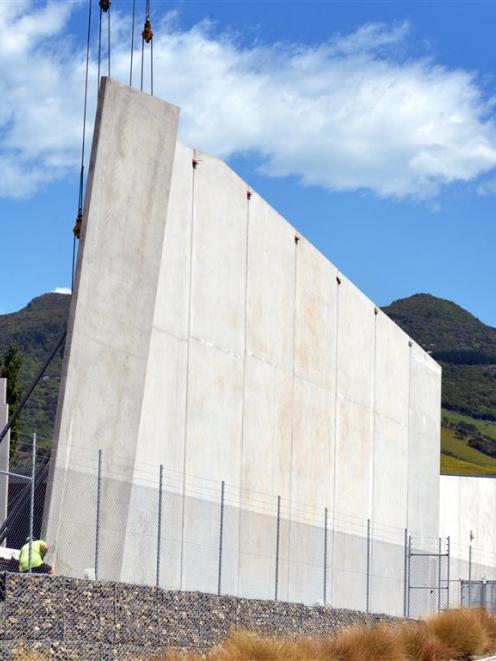 The construction sector is expected to underpin the economy for the next two years. Pictured, construction workers stand a pre-cast concrete panel at Port Otago’s new dairy storage facility in Sawyers Bay, last December. Photo by Gerard O'Brien.
Building activity has reached a 26-year high, underpinned by increasing work in Auckland and despite a waning of activity in Canterbury.

Analysts are picking a continuing strong contribution from the construction sector during at least the next two years, underpinning the country's economic growth.

The actual value of building work in place for the quarter to December 2015 was $4.4billion, of which $2.8billion was residential and $1.6billion non-residential, Statistics New Zealand (SNZ) business indicators senior manager Neil Kelly said.

"This is the most building activity we've seen since the series began 26 years ago, with total activity slightly higher than the previous record,'' he said, referring to the June quarter in 2005.

Westpac industry economist David Norman predicts there is plenty to run in the construction sector, sayings yesterday's strong data "is not expected to be the peak''.

"Residential and non residential construction are expected to be the major drivers of overall economic growth over the next couple of years,'' he said.

Despite an expected easing in Canterbury during the next year, Mr Norman predicted upper North Island consent volumes to increase over the next two years, boosted by the strongest population growth since the 1970s and a shortfall of 26,000 dwellings in Auckland.

"Although Auckland gets much of the attention, given its current construction boom, demand in places like the Waikato and Queenstown Lakes district is also growing at a solid clip,'' Mr Norman said.

Despite waning Canterbury work, construction is expected to be "one of the pillars'' of economic growth during the next two years, and to have an upward impact on GDP growth.

Paid hours in the construction industry hit a new high, while ready-mixed concrete production surpassed one million cubic metres for the first time.

Five of the six regional areas had increases in the seasonally adjusted value of building work. Auckland was the largest driver of the quarterly growth, while Canterbury was the only area where the value decreased.