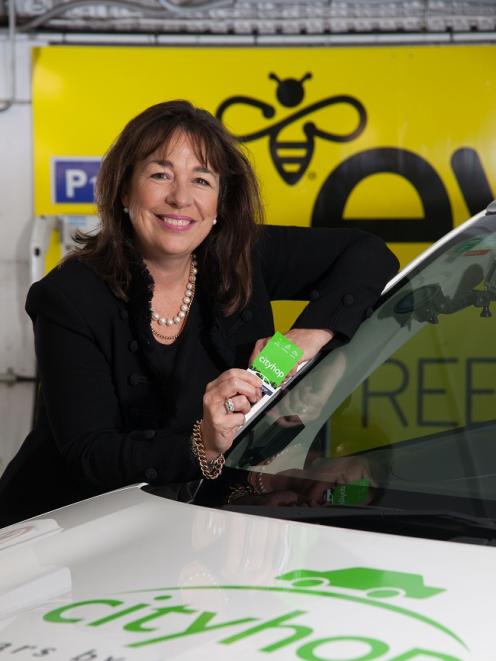 Council’s supportive “in principle” but says limited parking in town makes it difficult to roll out such a scheme.

But Cityhop and YooGo say investing’s worth every cent because it gets cars off roads, which reduces traffic congestion and greenhouse gas emissions, as well as saving people and businesses money on running costs.

Research shows for every car-share vehicle operating, between nine and 15 privately-owned cars are taken off the road, Cityhop founder Victoria Carter says.

CityHop’s been in Auckland and Wellington for 11 years and has a fleet of more than 140 vehicles. Some cars are used by up to five different drivers a day.

“Auckland Transport surveyed our members last year and it showed our members are about 50 per cent more likely to use public transport, bike or walk after signing up,” Carter says.

“If every two-car household dropped down to one car and used car-sharing for the other, that’s a lot of money that could go into a mortgage.”

Carter points out research into the economic value of car-sharing in Sydney showed each car pumps $NZ62,600 back into the community.

Car-sharing won’t work without support from local councils, she says.

“In Auckland and Wellington, we have dedicated car-share carparks on the streets.”

It’s proved true in Christchurch where the city’s council sold 55 of its pool cars, opting for staff to use YooGo on a daily basis.

Its fleet of 70 electric cars garners more than 2000 bookings a month and has saved more than 180 tonnes of carbon since opening in February last year.

Furthermore, a local housing developer’s throwing support behind the idea.

But car-sharing needs to be rolled out across the district, he says, which can’t happen without council investment in parking space.

“If we get it dotted around in Remarkables Park, Fernhill, Arthurs Point and the CBD, then you get a network effect,” Thompson says.

“It’s a fantastic way for us to support our residents and lessen the need for a car.”

He’s in talks with other accommodation providers also keen to get this off the ground.

Council says it’s aware of the possibilities of car-sharing but parking, among other things, makes it a complex issue.

Media advisor Jack Barlow says car-sharing spaces are being considered as part of council’s parking strategy, which is being worked on.

Council has 120 carpool permits for its 29 dedicated free carpooling carparks at Ballarat and Boundary Streets.