Entrepreneur rises to the challenges 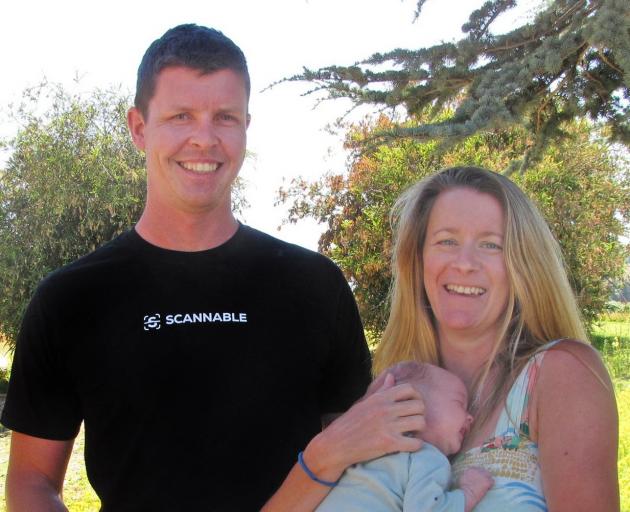 Robert Partridge, of Scannable, with wife Sarah Stirling and daughter Isla, in Wanaka. PHOTO: MARJORIE COOK
Waiting on a child to be born can be stressful enough, but imagine throwing a capital raise in the middle of it. Scannable founder Robert Partridge did both — successfully — while living in a bus. Riley Kennedy reports.

"I wouldn’t recommend it, but it makes for an interesting story."

Robert Partridge was talking about trying to raise $1million while awaiting the birth of his first baby — at the same time as living in a bus.

He did it, successfully, with his business now valued at $5.5 million — and has a five-week-old daughter, Isla.

The company is looking to employ more staff and continue developing its platform.

The technology was designed to make the lives of "vertical world operators" — rope access, arborists, rigging and rescue — less about administration and compliance, and more about good decisions, getting on the rope, and getting home safely.

He and his wife, English-born writer and author Sarah Stirling, had planned on returning to New Zealand to start a family and had been on holiday in the South Island at the start of 2020, planning it.

But when the Covid-19 pandemic started to take hold in Europe, it sped their plans up.

They decided to pack three bags full of stuff they might have needed for six to 12 months, move their furniture into the basement of their house and get on the next flight to New Zealand.

"We booked our tickets at 8 o’clock one morning and we were on the flight that night," he said.

They returned to Dunedin and Mr Partridge was able to continue working in his job remotely from New Zealand.

But realising it might not work in the long term and seeing strong support groups, such as Startup Dunedin’s Incubator Programme, he took the plunge and started working on Scannable.

After spending some time designing the idea, Mr Partridge took Scannable to market early last year, pre-selling and validating the proof of concept to take customers.

That had allowed the business to raise some initial capital to build the platform.

In July last year, Mr Partridge started to look at raising capital from angel groups but did not think that was the best path for Scannable.

He believed the business was better suited to venture capital (VCs) organisations to help the business scale up more quickly.

Mr Partridge started approaching VCs in September, which meant the raise did not close until the end of November, the same time his first-born baby, Isla, arrived.

The plan is to use the money to scale up the staff numbers to five and a-half full-time equivalents by June this year, continuing to build the platform and building out a data set to accompany it.

The majority of the money had been confirmed before Isla arrived, but that still made for a fairly stressful time, Mr Partridge said.

Being keen outdoors people, the couple moved to Wanaka in early February last year to continue building the business, and for the lifestyle that it brought.

"It is a fantastic place to live and we love being around the mountains," he said.

The family was now living in a bus and intended to build a tiny home.

As Wanaka transitioned away from tourism, it was a great place to be setting up a technology business, Mr Partridge said.

"It’s a really exciting time to be here."

Moving Scannable to Wanaka was not a strategic move, but Mr Partridge was looking forward to being part of that transition and attracting talent to the region.

"It’s awesome to be building technology for the world from Central Otago," he said.

Now that the capital raise had finished and Isla was here, Mr Partridge was spending some quiet time with his family.

"I’m focused on today, my wife and our baby girl and just enjoying being present in the moment with them," he said.