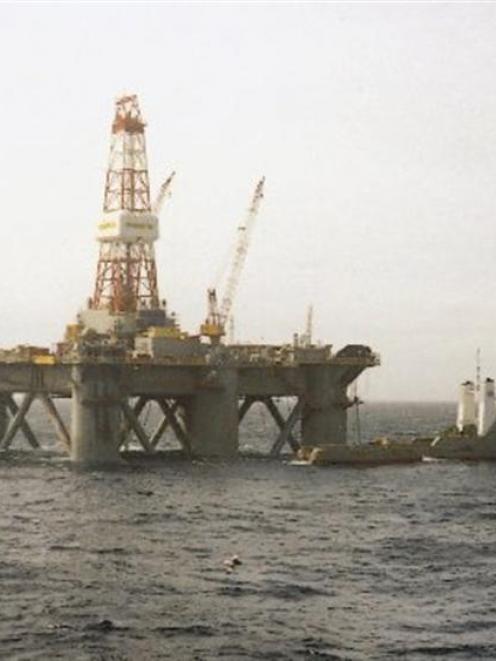 An oil rig is expected in the Great South Basin within a year. Photo from ODT files.
Oil giant ExxonMobil has rejected industry speculation it was considering bringing forward its timetable for oil and gas exploration in the frontier Great South Basin (GSB) in the Southern Ocean.

Oil industry sources have said, on condition of anonymity, that the hydrographic survey work done by ExxonMobil recently in the south basin had provided "very encouraging" results and Exxon had firmed up an option to bring an oil rig to New Zealand "within a year" for a test-drilling programme.

The other consortium is headed by OMV New Zealand Ltd, of Austria, and includes partners PTTEP Offshore Investment, of Thailand, and Mitsui Exploration and Production Australia, of Japan.

"The meetings were a general update on the [seismic] data . . . which was only completed in April and only just sent to the company we are using to process it," she said.

The consortiums could spend up to $1.2 billion on exploration during the next five years - eclipsing any other area of interest in the country at present.

Ms Arnold said the full results of the seismic data might not be available to Exxon until mid-2009 and a decision on whether or not to drill might not be made until late-2009 or 2010.

The south basin has not attracted major companies to the area since Hunt Petroleum in the mid-1980s.

Between 1976 and 1984, the area was explored by Hunt, Phillips, Placid, Occidental, Husky and Ultramar.

Many problems will be faced by the prospective drillers, aside from the notorious weather and potential for icebergs, drilling depths in the south basin are on average 750m but extend to more than 1200m.

OMV New Zealand was contacted for comment, but was unable to respond.

The Toroa well had to be abandoned after an error in the drilling and recovery procedure.

In the same vicinity, Bounty Oil and Gas NL and Magellan Petroleum New Zealand held exploration permits, including prospects Mehrtens and Cullen which begin about 15km offshore from Kaka Point and the Tara, Toroa and Lomu prospects. Several were thought to contain a million barrels or more of oil, but despite plans to test drill the areas matters did not get past the seismic testing stage.

However, in late 2006, the oil rig Ocean Patriot spent about a month 21km off the Oamaru coast drilling a 3000m exploratory well that it capped and abandoned as not commercially viable.

The drilling was the first in the South Island since the 1980s and was undertaken by Australian consortium Tap Oil (the 40% shareholder), Australia Worldwide Exploration (25%), Beach Petroleum (20%) and Arrowhead Energy (15%).

In contrast with the multinationals, Greymouth Petroleum will be exploring in shallower areas, where it already has experience, as opposed to depths of up to 1km in the consortium blocks.