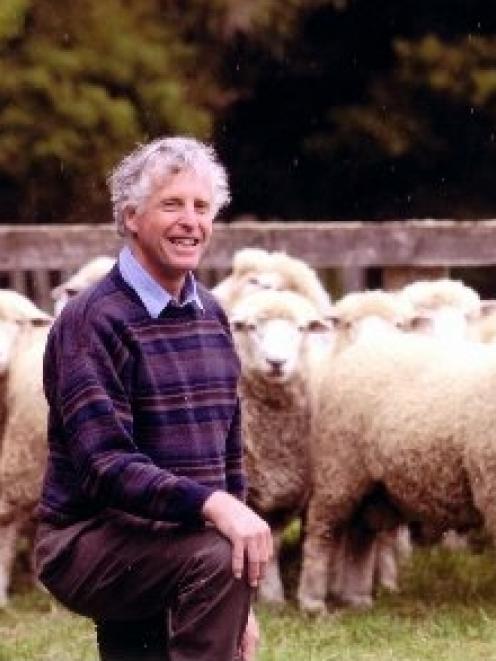 Derek Daniell, a principal of Wairere Romneys in the Wairarapa, says dairy farmers are enjoying much greater wealth, even though their products are not targeted at affluent consumers. Photo supplied.
The world's affluent people may be buying New Zealand's meat and wool, but a leading farmer is questioning why that is not making sheep farmers as wealthy as their dairying cousins.

In a thought-provoking article in a client newsletter, Derek Daniell, a principal of Wairere Romneys in the Wairarapa, said dairy farmers were enjoying much greater wealth, even though their products were not aimed at affluent consumers.

He and a farm adviser have compiled a financial comparison between sheep and beef farmers and dairy farmers, in part to provoke debate about how the sheep and beef industries could improve their performance, he said.

"We need to improve our act," he said in an interview.

In terms of revenue generated per person, Mr Daniell said there was little difference between the two sectors, but many sheep and beef farmers farmed hill country that was vulnerable to dry summer weather, which limited land use.

While dairy farmers had greater capital outlay, debt and staff management issues, their economic surplus was significantly greater, and he believed much of that was because of issues beyond the farm gate - the use of technology and the way dairy successfully marketed fat and protein.

He has calculated a projected season-average price for lamb, mutton, beef and wool of $3.73 a kg for the coming year.

Assuming a 58% yield from boned-out meat product along with wool sales, Mr Daniell said the usable portion of that basket of goods would be worth about $6.43 a kg - similar to last season's milk price.

But, despite meat and wool predominantly being sold to affluent consumers, it was not making farmers wealthy compared to dairy farmers.

"This sounds like a disconnect - same farm gate price but sold to different socio-economic groups.

"And we are often told that our product price is getting too high and demand will shrink," the ram breeder said.

Mr Daniell concluded that while there were still gains to be made behind the farm gate, lifting the performance of more farmers to close to that of the top 10%, there was also plenty of scope for greater efficiency beyond the farm gate.

Examples were greater promotion of grass-fed beef or having a meat-tenderness test which could differentiate meat based on eating qualities.

Since then, beef returns had "flat-lined", lamb had risen at a similar rate but to a lower level to milk, but the biggest loser had been wool and pelts.

The $16 million ovine automation research programme should increase that efficiency.

Fonterra required more shipping space each year than all meat exports put together, and the dairy giant should be able to command cheaper shipping rates as a result.

Technology such as GPS ensured Fonterra was able to be more efficient collecting milk and while milk had a multitude of uses, Mr Daniell questioned whether meat could have other unknown uses that would generate higher returns.

He said farmers had the ability to improve the viability of the industry and could do that by supporting farmer-owned meat and wool co-operatives, which would force aggregation of the industry at no cost to farmers.

"The cheapest way to get aggregation is to support farmer-owned co-operatives."