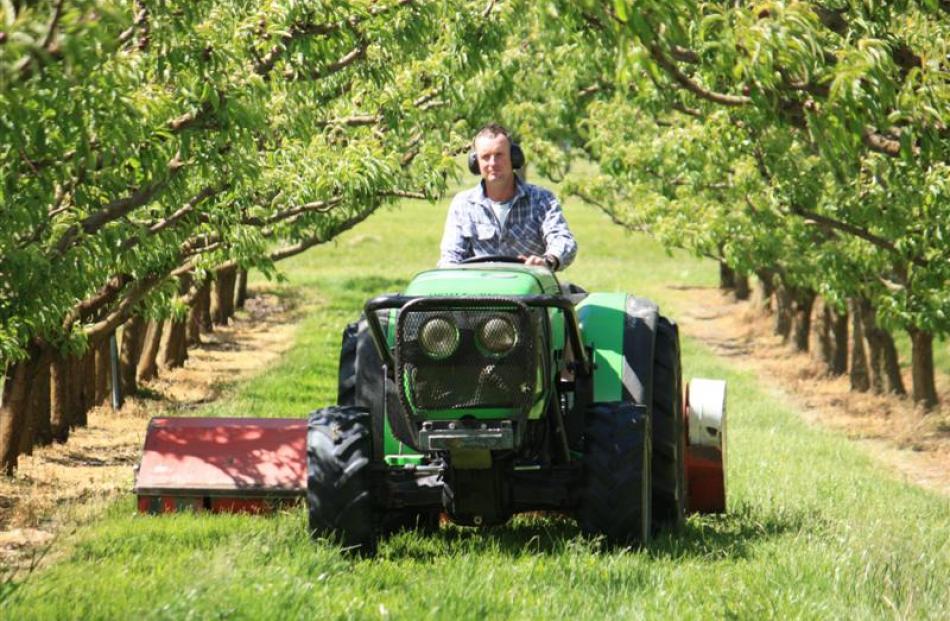 Simon Webb mows a row of grass on the orchard. Photos by Leith Huffadine. 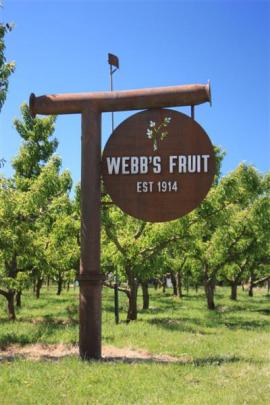 A sign marks the orchard, next to State Highway 6. 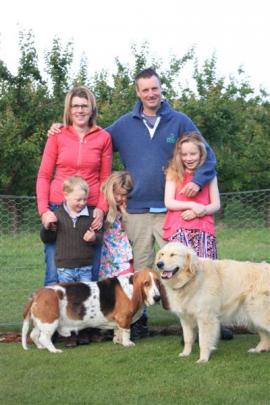 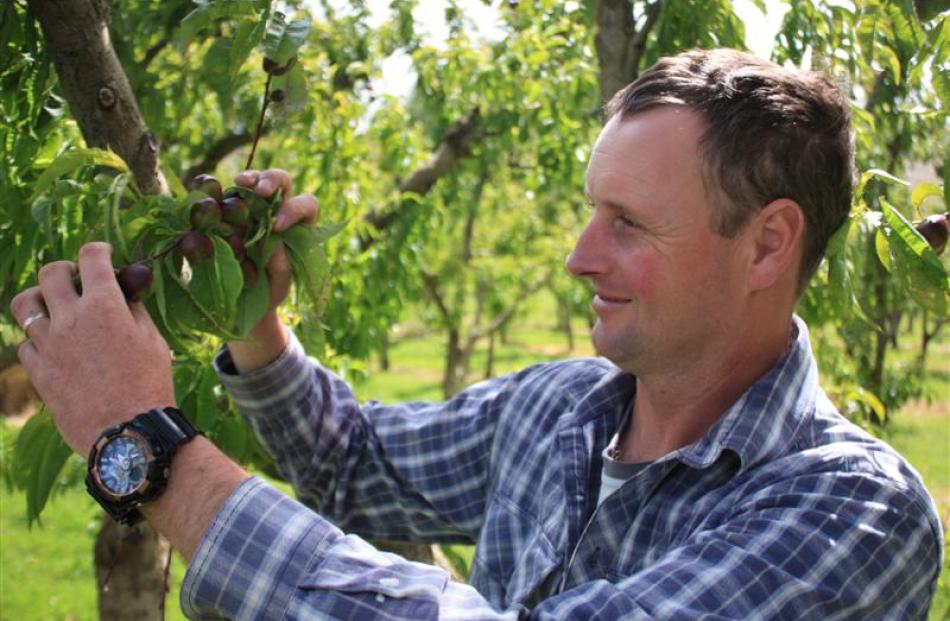 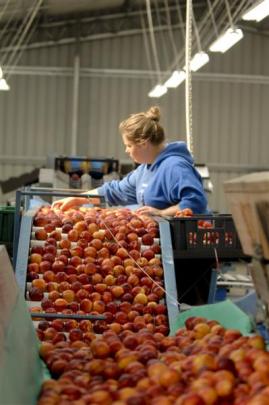 A worker sorts apples on a conveyor. Photo supplied. 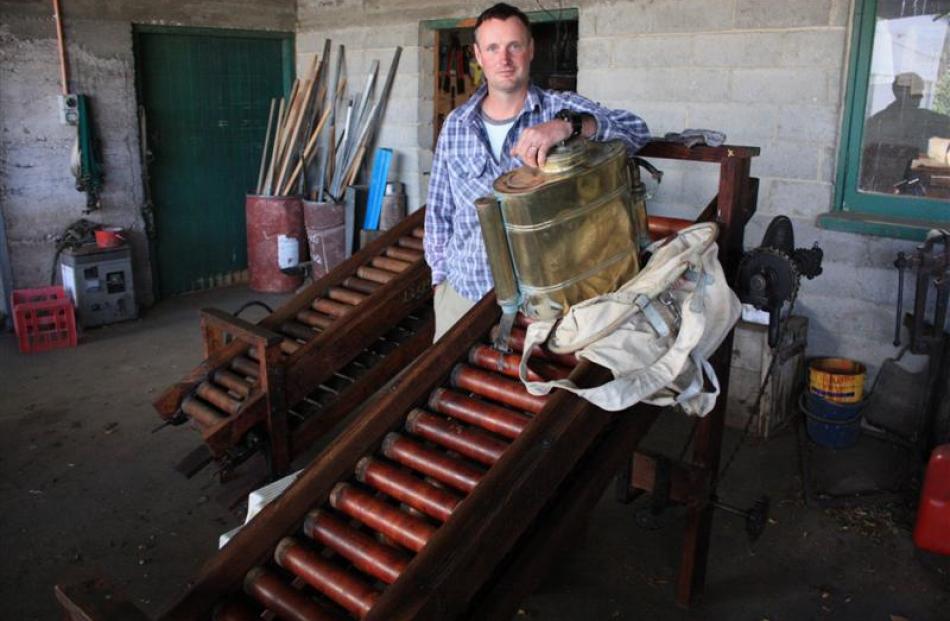 Simon Webb with equipment once used on the orchard including an old brass spraying knapsack, an old picking frame, and wooden conveyors. Photo by Leith Huffadine. 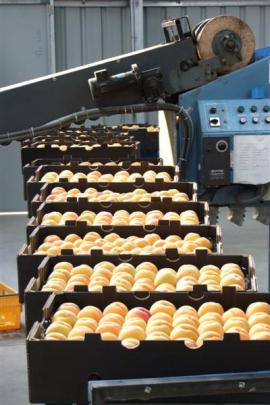 From father to son for four generations, the Webb family has been supplying people with fruit from their orchard, located just outside Cromwell, which has been in the family since 1914.

Established by John Robert Webb, in early summer that year, about 8ha of the 32ha section he purchased was planted in fruit trees.

Going by the numbers, Stonehurst Orchard is now just over 100 years old and has about 25ha planted in trees which produce about 550 or 600 tonnes of fruit a year.

About 28 varieties of fruit have been planted on the property, comprising about 40% apricots, 35% peaches and nectarines, and 25% apples.

In early December, the 100th anniversary of the orchard was celebrated.

At present, it is in the hands of Simon Webb and his wife Trudi, who live on the land with their three children, Cameron (3), Brooke (5), and Ariana (7) and dogs Nato and Moffy. Mr Webb said father-son succession was not as common as it once was.

''It's a hard process to go through. I had my direction I wanted to go, so I pitched and talked with my parents and came up with a succession plan.

''It's worked out so far. We are really happy with where we are.''

John Robert (JR) Webb and his wife Florence, previously warehouse owners, moved to the orchard from Invercargill in 1914 for health reasons.

Some of the pear and apple trees on the property then are still there today.

It was a move from a new home with running water and an indoor toilet to a farmhouse with no running water, kitchen, or toilet attached.

JR Webb initiated use of frost pots and flood irrigation on the property, and development of the land.

When he died in 1928 he left the property to his two sons and Florence, who became known as ''Granny Webb''.

The partnership ''JR Webb and Sons'' was created, and brothers Jack and Harry took over orchard operations.

Eventually, Harry retired, leaving Jack and his son John to run the property.

John went on to marry Ainsley in 1974, beginning the longest partnership on the orchard, before forming a partnership with Simon and Trudi in 2003. John died in 2012, and Ainsley, who still lives on the property, recently wrote a book about the orchard's history, with proceeds going to the Otago Community Hospice.

Although it was ''far too early'' to think about his children taking over the orchard, Mr Webb said he would not be against the idea.

Mr Webb said he was ''pretty proud'' of what his family had achieved during the past 100 years.

''Its pretty hard to stay in business [that long]. I'm so proud of past generations.

''When you are running a business you have your own plans and goals. You have to respect the past but if you worry about it too much and don't do your own thing ... you can't achieve your own objectives.''

He described the orchard as ''a business where there is lifestyle and history involved.''

A lot has changed in 100 years of horticulture.

First of all, growing fruit has become more intensive.

''The land can still sustain that. It's more about upping the skill level and being on to it a little more.''

Mr Webb said the orchard did not have a regime such as organics, but focused on sustainability.

''We are always looking to good agricultural practices and not doing things that are going to harm the soils, which are one of our biggest assets.''

Technology, machines, fruit varieties and markets were different but the ''basics of orcharding'' had not changed much, he said.

''We still have to do thinning, pruning and picking at the same good conditions. We still have to get our nutrition and irrigation right. We have always had to do these things - they have just been refined over the past 100 years.

On the property, each winter, about a hectare was planted with new fruit varieties.

''We make our decision on that based on what we think the latest direction to go in is.''

Other times, a ''tried and true'' variety will be planted.

''If we don't try new stuff we can start to lag behind.''

In 2012, Mr Webb was awarded the inaugural Mack Nicol Award for commitment to excellence and ''innovation and quality in the New Zealand summerfruit industry''.

''That's just about following along in my father's footsteps. He used to drum into us that it had to be an eatable, enjoyable piece of fruit. A lot of what that award had to do with was what has been ingrained into me ... that is something I want to happen to the next generation.''

Weather could be an unpleasant topic of discussion for orchardists, but Mr Webb said he did not think about it ''too much''.

''If you get too stressed about it you are in the wrong game. You try to mitigate it and reduce the impact but you can't manipulate the weather.''

On the topic of climate change, Mr Webb said he thought Januarys were now wetter than they used to be.

''Certain times of the year are getting wetter, and I think things are a bit cyclic.''

He used the example of periods in the early 2000s with heavy frosts, followed by lighter frosts, and in recent years, a return to heavy frosts, to illustrate his point.

Newcomers to the horticulture industry faced a range of fresh challenges, but brought with them positives as well, Mr Webb said.

He listed new blood in the industry as a positive, providing those already established something to ''feed off'', with new ideas and opportunities for growers.

On the other hand, a challenge facing horticulture was the amount of capital required to set up an orchard.

''[It] is quite off-putting to young growers, and that's a real shame. It's hard for them to come into the ownership side of things.''

He enjoyed being a part of the ''close-knit'' industry and the hands-on work.

''You have to be pretty smart and savvy where you invest your money and time for the best return on your property.''

If these sometimes extravagant-sounding names sound familiar, you will know they are pears, plums, peaches and apricots.

These varieties are some of the 28 grown at the Webb orchard.

Anyone who has driven from Cromwell to Wanaka on the western side of Lake Dunstan will have gone past the rows of fruit trees belonging to the Webb orchard.

On the roadside is a fruit stall, originally established in the 1970s, which was renovated and reopened in early December.

The orchard's motto is ''quality in every bite''.

''We have our own little thing. What we want is if someone comes into the fruit stall, we want them to come back time and time again.''

Mr Webb said the orchard sold between 20% and 40% of its produce at the stall and through mail orders.

About 30% to 40% was sold to New Zealand markets, and the remainder was exported.

While many orchards were moving towards monoculture or planting purely for export, Mr Webb said he believed the key to survival was diversity.

There were still ''a few'' orchards in the Cromwell area that had remained diverse.

Although the Webbs ''made a living off it'', it was not a ''get-rich-quick scheme''.

''We have a good lifestyle here on the orchard [but] you have to work hard and think hard to make a good living.''

• Located on the western side of State Highway 6, one minute from Cromwell.

• 28 varieties of fruit, including apricots, peaches, nectarines and apples.