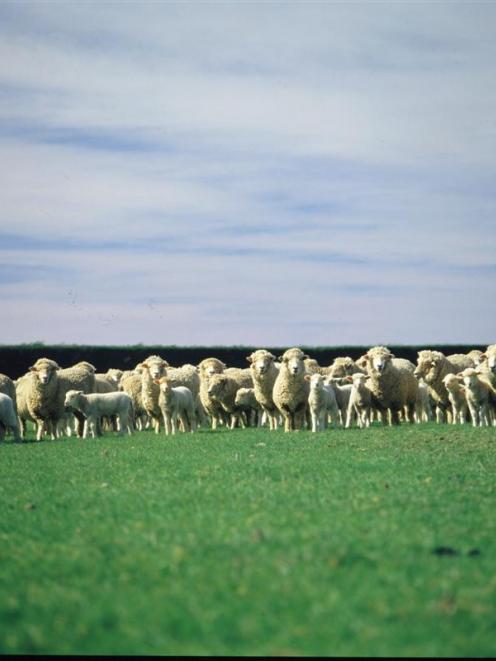 Photo from Beef and Lamb NZ
Southland-based meat company Alliance Group held a series of supplier roadshows throughout the country last week. Agribusiness reporter Sally Rae attended a roadshow at Pleasant Point, where the company outlined what had been a challenging year, and previewed the coming season.

It is incumbent on the industry to address the "inherent over-capacity" for sheep meat, Alliance Group chairman Owen Poole says.

While decisions that had a heavy impact on people's livelihoods and disrupted families and communities were not taken easily, they were "sadly" necessary to reflect the changing livestock supply situation, Mr Poole said.

He was referring to the company's recent announcement that it proposed to cease sheep processing at its Mataura plant, and also the closure of the Sockburn plant in Christchurch between May and July this year, a move which was announced a year ago.

While 260 Mataura sheep meatworkers would be offered the opportunity to shift to Lorneville, near Invercargill, fewer alternative options for about 65 management, supervisory, administrative and trades positions would likely result in redundancies.

Sheep and lamb processing would be transferred mainly to Lorneville, while some stock might go to Pukeuri, north of Oamaru, depending on geographic location.

The company had reviewed its business operations and made changes to reflect the evolving industry dynamics, both within New Zealand and the market.

It had reconfigured its assets and focused on overheads and efficiencies. The Sockburn and Mataura decisions would significantly lower overheads and improve profitability and competitiveness, Mr Poole said.

Both were "very, very difficult" decisions to make. "It's not something we do lightly but it is necessary," chief executive Grant Cuff said.

The 2011-12 year had been both challenging and difficult, particularly for sheep meat, with the world economic problems, consumers substituting lamb with lower value protein and slower sales, Mr Poole said.

In New Zealand, exporter processors did not respond to the rapidly changing world circumstances early enough and "paid too much for too long".

Alliance Group, which had been "tested" this year, would record a loss in the annual financial result to be announced in mid-November, and there would be no farmer distributions for the 2012 year.

Land use change had decreased the numbers of sheep and lambs available for processing while increasing cattle numbers, he said.

The South Island lamb and sheep kill was 15 million "odd" a decade ago, peaked with land use change at 18 million, and was now about 12 million, Mr Cuff said.

Land use change was not helped by a couple of significant droughts and some spring storms which all jointly affected capital stock numbers.

The changes that Alliance Group was making would mean savings of "tens of millions of dollars" a year, he said.

In a market outlook, Mr Cuff said the Christmas chilled lamb leg price in the northern hemisphere was not at last year's levels but was still encouraging.

Pressure remained on higher value cuts and, on balance, there was increasing price stability.

The mutton market had suffered with the reduced lamb price and there was less demand for high value boneless cuts for food service, while Australia had increased export volumes of mutton by 21% year-on-year.

Alliance Group was predicting $90 for "a good lamb" after Christmas. While that was the same price farmers received in 2009, Mr Cuff said the exchange rate movement, from 2009 to 2013, had the effect of $50 a lamb.

Mutton was predicted to be $80 for a cull ewe, cattle would be back, but not as much as sheep meat, and the drop in venison was due to the exchange rate.

It had been a tough year for exporters but farmer returns had held up. Next season was expected to be more settled, he said.

The company was reviewing its customer base and had refreshed its Pure South brand. Asia, particularly China, had seen "dramatic growth" and the company was very well positioned in China with in-market partner Grand Farm, while new markets like Brazil offered significant potential with early shipments of high-value products, Mr Poole said.

Mr Poole, previously the company's chief executive, had indicated to directors in June last year his intention to retire in December this year.

With the "significant changes" being outlined during last week's supplier meetings and with "more to come", he had agreed to extend his tenure for a further year until 2013, he said.

During the question session, one farmer said any price for lamb under $100 was "bargain basement" and was not going to help the downward trend in sheep numbers.

"One day you'll be just sourcing them all from the Chatham Islands and a few wild ones up the mountains," he said.

While the company understood $90 was not good enough, it could "only do about it what we can do about it", Mr Poole said.

"I know everyone's aspirations will be higher than 90 bucks but we'd be misleading you if we told you today that we think we could do more than that next year."

Alliance Group had a tough year but it was not on its own.

"It's fair to say ... there's not a lot of happy campers in our side of the business," he said.

Silver Fern Farms financial year ended last month. In an update to suppliers, chief executive Keith Cooper said while it had been a disappointing year financially, it reflected the environment of an appreciating currency, falling sheep meat market values, and sheep meat procurement pricing in January-February this year not reflecting market revenues.