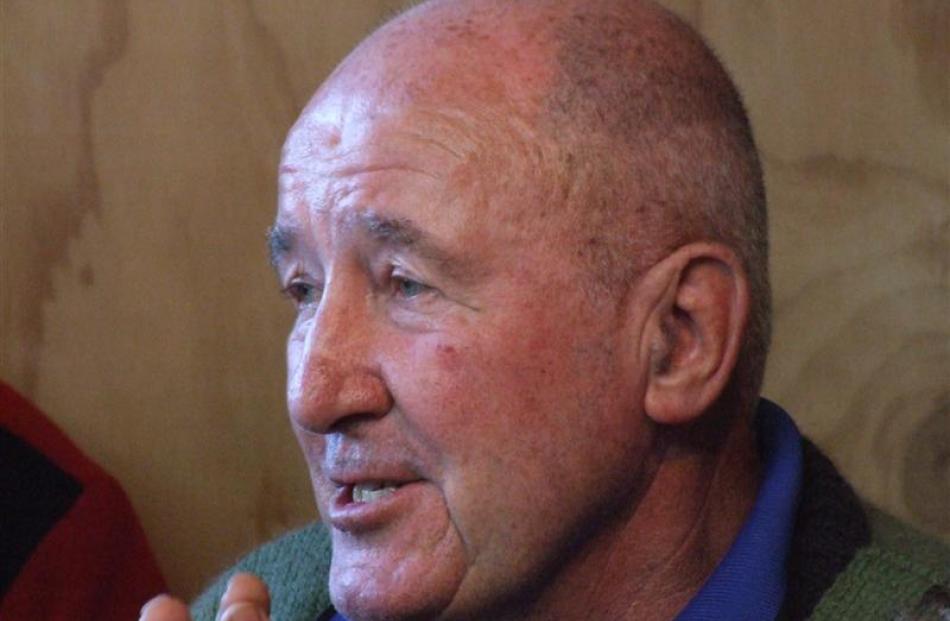 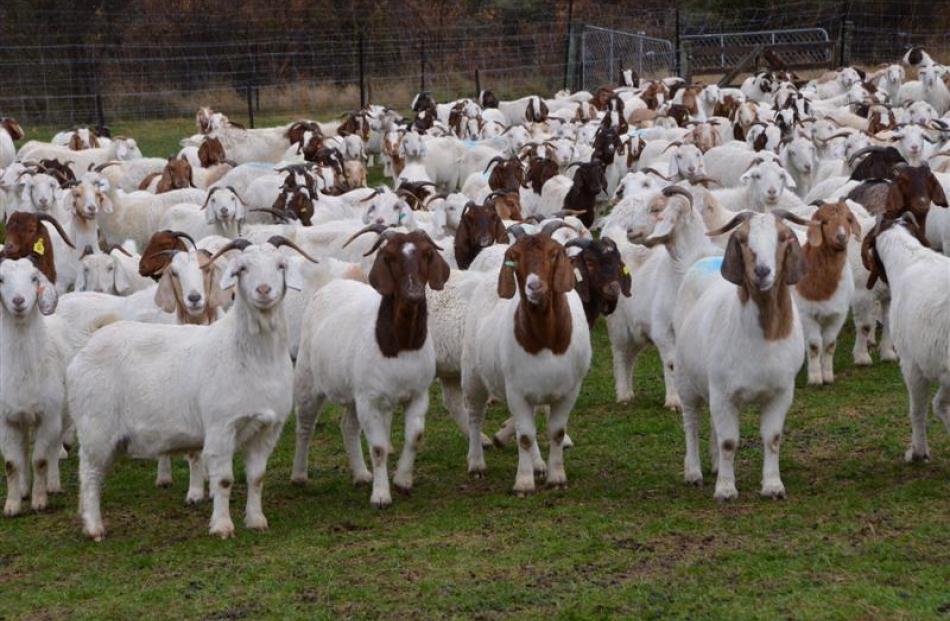 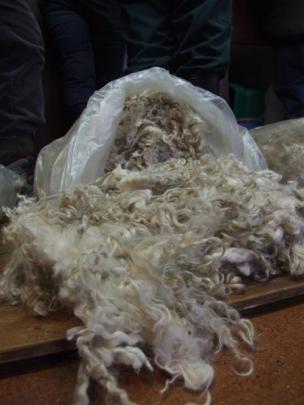 Mohair on display at the Campbells' Roxburgh farm. Photo by Sally Rae. 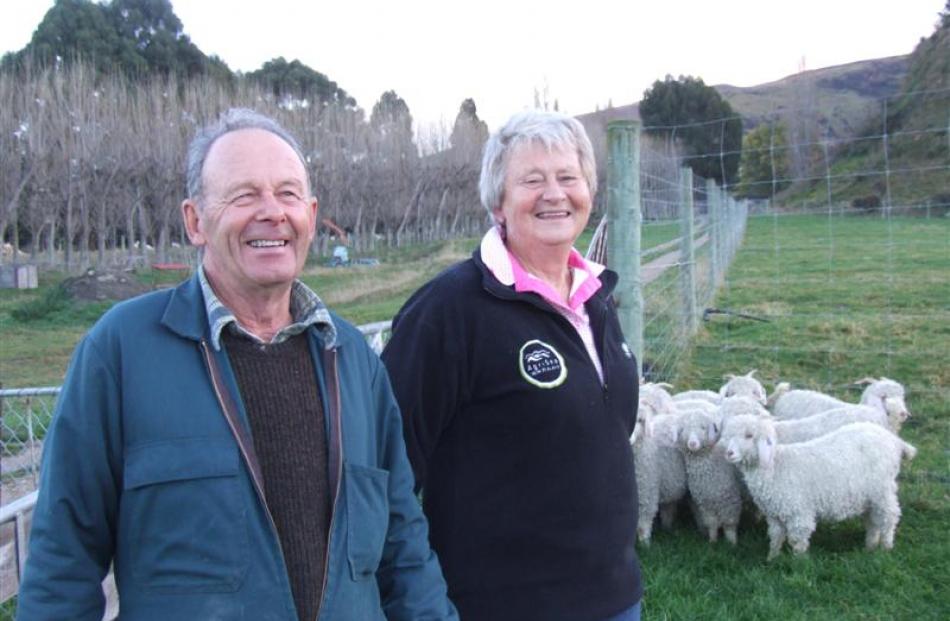 Angora breeders Bill and Irene Campbell on their farm at Roxburgh. Photo by Sally Rae. 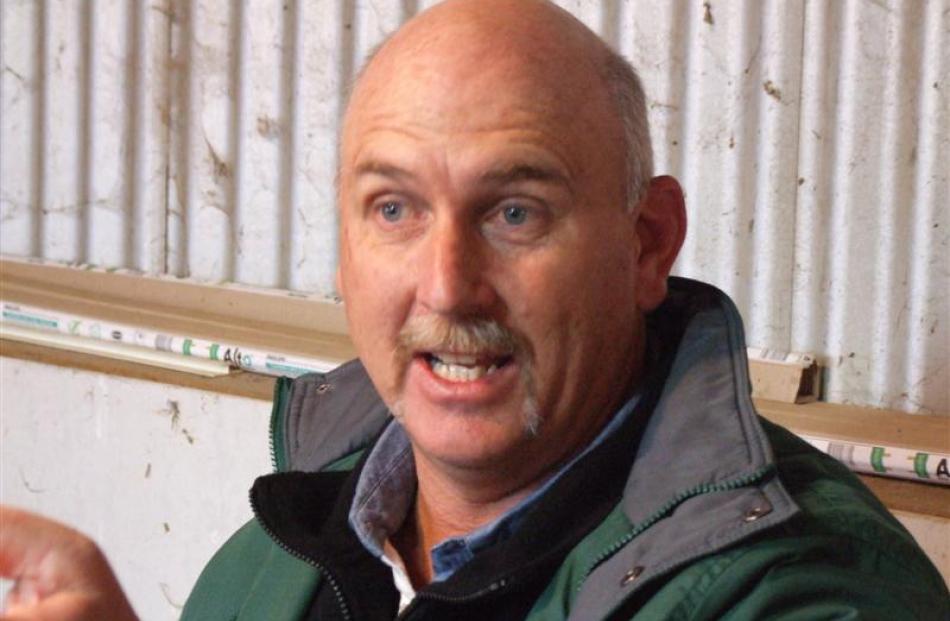 Jackie Freeman reckons there is ''more to goats than meets the eye''.

Mrs Freeman and her husband Grant recently bought Mohair Pacific, a Canterbury-based business that is a buyer and broker of New Zealand mohair.

The couple, who were attending the recent inaugural NZGoats conference in Queenstown, were excited about the industry's potential.

It marked the first conference of NZGoats, an organisation established by Mohair NZ and Meat Goat New Zealand and operating under the Federated Farmers umbrella.

The objective was to add value by fostering the development of a ''reinvigorated and unified goat sector'', NZGoats chairwoman Dawn Sangster, from Ranfurly, said.

All three organisations were committed to working together and saw great potential in the future, although they realised it would take time, Mrs Sangster said.

There used to be about 24 million kg produced globally and now production was under three million kg.

In New Zealand, it had reached as much as 500,000kg, but now it was down to just over 30,000kg. The price was ''right up there'' and not predicted to come down. The main market was South Africa.

There was a real shortage in the finer micron end (32 micron and down to 23), he said.

Facilities in New Zealand could handle 10 times the amount of fibre they were handling now, he said.

NZ Boer Goat Breeders Association chairman Geoff Muggeridge said the opportunity for farmers to visit both Angora and Boer goat farms on two field trips, together with the social interaction that the conference fostered, was especially valuable.

When Mr and Mrs Campbell ''semi-retired'' five years ago, they halved their goat numbers.

They moved from a farm at Balfour to a 68ha property at Roxburgh where they run 500 goats, mostly weighted towards wethers as they had hill country on which to run them.

They kidded the does on the flat and then cut the grass for hay for dairy farmers.

Mrs Campbell was captivated by the inquisitive nature of goats and their ability to understand ''what you want them to do''.

Mr Campbell said the mohair that was being grown in New Zealand was ''a thousand times better'' than that grown during the ''boom and bust'' era of goats in New Zealand.

He attributed that to the arrival of Texan and South African genetics, which his wife, a qualified classer, said had taken New Zealand to a ''world quality'' standard of fibre.

Chris Sundstrum was delighted to sell Mohair Pacific to a young couple.

Mr and Mrs Freeman have a lifestyle block at Swannanoa, near Christchurch, and the purchase of the business was a ''good fit'', Mr Freeman said.

Mrs Freeman started with three in-kid goats and now had about 20. She expected to get up to between 30 and 40 eventually.

Mrs Freeman classed all the fibre, having spent time under Mr Sundstrum's supervision, and then got it baled up and tested and sent to South Africa.

When she saw a good fleece, she encouraged breeders to enter them in their local A&P show.

She enjoyed fashion and natural textiles and said there was increasing demand for the fibre.

Consumers wanted natural fibres and a more sustainable approach. Goats were also good for weed control and their goats paid the rates for their property.

Goats were also easy for women to handle and she did most of the work with them herself, she said.

AgResearch senior scientist Richard Shaw told breeders if they wanted their industry to be competitive into the future and ''not just disappear'', they needed to think about using modern breeding technologies to take advantage of what they could do, and to improve quality.

Dr Shaw developed the carbohydrate larval antigen saliva test for the sheep industry, which became available to it as a commercial test in 2010.

Now, they were looking at whether the test could be used in other livestock, including Angora goats, as a means of identifying or selecting animals that would better handle intestinal parasites.

It was still very early days in the trial but parasite resistance was a lot worse in goats than other livestock.

Because goats had evolved as browsers, they could process drenches much more quickly than sheep, so drench was less efficient and parasites were able to evolve a lot quicker, he said.

All red meat was healthy and nutritious and an important part of a balanced diet, she said.

She also spoke of Beef and Lamb's promotion of red meat in New Zealand, using the Olympic champion Iron Maidens, which was targeting young women. The iron and nutrition in meat was important for babies and toddlers, she said.

Lean Meats chief executive Richard Thorp stressed the importance of having supply committed to the date and the volume.

Lean Meats, which has a processing plant in Oamaru, killed about 5500 goats a year, about 85% of the South Island goat kill, and exported mainly to the Caribbean.

Most of the New Zealand goat kill came from the North Island, and the South Island was a relatively small kill, he said.

Mr Thorp was impressed with the goat conference, saying there seemed to be some very forward-thinking people there, with scale around goats, and who were using them to their best advantage.

Lean Meats was also interested if goat farmers wanted to collaborate and take a brand to the market.