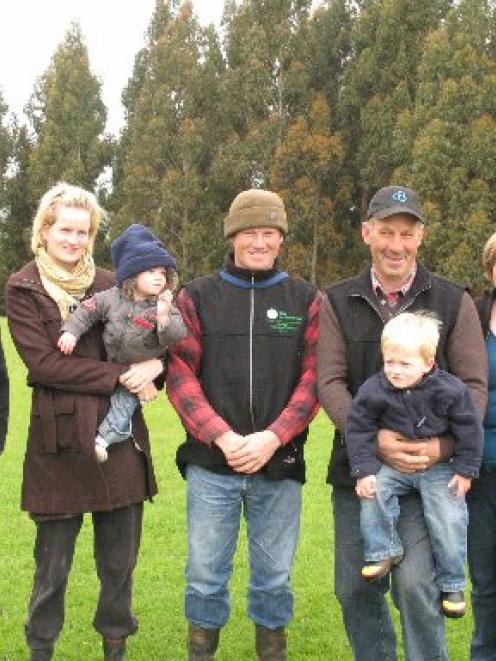 The Alderton family from Waitahuna, Otago winners of the Ballance Farm Environment Awards (from left) Bruce, Paula Kastner, Michael, David, Ron, Tyler and Carol. Photo by Neal Wallace.
Given the sheep industry's well documented problems, labelling yourself specialist sheep farmers might not be considered the most inspiring of titles, but it is one the Alderton family wears with pride.

They are living proof sheep farmers can make money and be profitable by balancing business, animal and environmental factors.

The key, according to Ron Alderton, was attitude and determination.

Judges said the Aldertons won the Otago Ballance Farm Environment Award because of the productivity and profitability from a simple all-sheep farming system, their awareness and management of waterways, investment in forestry and commitment to eradicating weeds.

It is a formula that works both environmentally and financially, with the business never running a cash loss since Ron and Carol Alderton bought their first farm in 1979 with just 38% equity.

Mr Alderton told about 120 people at a recent field day that they have chosen to have only sheep, to simplify management, avoid environmental issues associated with cattle and deer, and to allow them to focus solely on making the most of sheep.

Today, they run a high-performing, profitable family business on country that ranges from flat land to open ridges and steep gullies.

The business is structured to allow for succession.

When Mr and Mrs Alderton bought Hillcrest in 1979, it had two old houses, a woolshed that held 100 ewes, no sheep yards and was split into 20 paddocks with gullies clogged by gorse and broom.

Feed was so short that in the first winter hoggets had to be sent to grazing, due in part to average phosphate levels of 7 and pH of 5.7.

"It was a real nightmare," he said.

The original sheep were traditional Romneys, which struggled to achieve a 100% lambing, but after five or six years, extended family convinced them to cross the ewes with a Border Leicester, and the lamb drop immediately rose from 105% to 124%.

This move created a fat issue among lambs, so in 1990 they moved to Wairere Romneys which stabilised the lamb drop at better than 130%.

By 1996, Mr Alderton said, he was happy with his flock, but found twin lambs were not performing as well as he liked, so introduced a quarter East Friesian.

He found that breed dominated, and the resulting stock performance was disappointing, prompting a return to Wairere Romneys.

Mr Alderton said he has never chased extreme animal production, but targets what the farm can finish, and with the risk of dry summers, does not lamb hoggets.

His ewes go to the ram at between 68kg and 69kg and with two-tooths he aims for 64kg.

The average carcass weight of prime lambs in the first 10 years ranged from just below 14kg to just over 15kg, but that has progressively increased to the current 17.4kg average.

A big difference has been the larger number of lambs sold early.

Last season, 586 lambs were sold at weaning in January and more than 1500 by late February.

Ten years ago, fewer than 1000 were gone by late February and over 600 sold in May at a season average weight of about 16kg.

Lambs are split into three lines based on liveweight at weaning: over 35kg, 30-35kg and under 30kg.

Mr Alderton said one of the keys to improving production and water quality had been controlling weeds, in which trees played a vital role.

The sale of carbon credits was a new source of income as the trees grew and that offset establishment and fencing costs.

Trees have been planted in gullies and in areas to provide shelter and to control runoff, nutrient runoff and silting, and on Hillcrest such has been the success in combating weeds, what had taken up to 200 hours a year of spraying to control gorse and broom was now down to a 24-hour job.

On Perkins Block, they have got rid of two-thirds of the gorse and broom and again planted the areas in trees, including high-density Pinus.

"My attitude to broom and gorse is eradicate it. I've been doing it for the first 30 years and hopefully my grandchildren will not have to worry about it. You have got to have that attitude."

This year, he is planning to spray a weed-infested gully and topdress it with swedes for winter feed before planting it in trees.

Development of Perkins Block was ongoing, and it was not immune from September's storms, with lambing down about 20% on last year.

The storm took mainly older lambs and Mr Alderton said he hoped the lower lamb crop would be offset by heavier ewe and lamb weights and improved wool prices.

Each farm is subdivided into about 100 paddocks and sheep are rotated around the blocks and fed autumn-saved pasture, but there 300 tonnes of silage is available.

Hoggets are fed about 15ha of swedes and silage.

Swedes are part of his repasturing programme, and tend to be used on one farm then the other as part of regrassing.

Each year, he carries about 100 bales of wool through to the spring sales, a move he said traditionally gave higher returns and meant he did not need a current account facility.

The Aldertons have avoided large capital investment in machinery, choosing to employ and work alongside contractors.

They do their own crutching, help with fencing and shear five times a year, which helped with management and keeping costs down, plus it meant they could keep an eye on the stock and the shearing process.

Two-wheeled and quad motorcycles are the main farm vehicles. The only tractor they own is a 14-year-old 85hp machine.

They own a road-registered 1974 Land Rover and use Subarus to travel between farms.

"We save a lot of money by looking after gear. We buy good gear and look after it," he said.

Soon after buying Hillcrest, they had to raise $17,000 to buy some leasehold land, then four years later built a house, which was soon paid off, before replacing the covered yards and embarking on a major fertiliser programme which helped them through the downturn.

Always, they were saving money, which allowed them to buy the Perkins Block and now a third farm in which they will have 50% equity after the first year.

Mr Alderton said he and his family got immense pleasure from the fruits of their labour.

"It's our farm. When you look out in the morning, you see what we've done not what someone else has done."