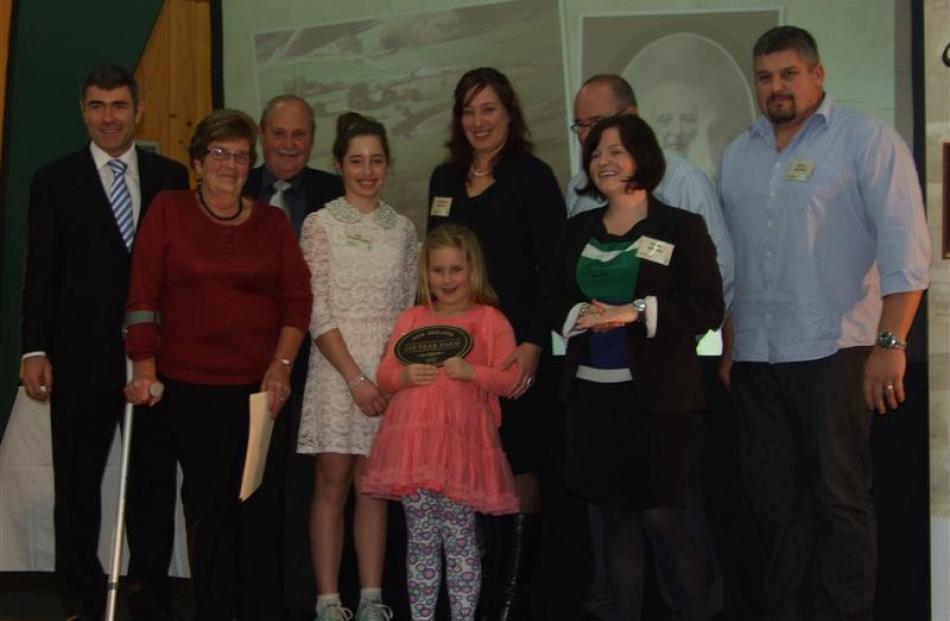 The Moore family, of Pukepito and Berwick, receive their sesquicentennial (150 year) award at the New Zealand Century Farm and Station Awards in Lawrence on Saturday. Photos by Helena de Reus. 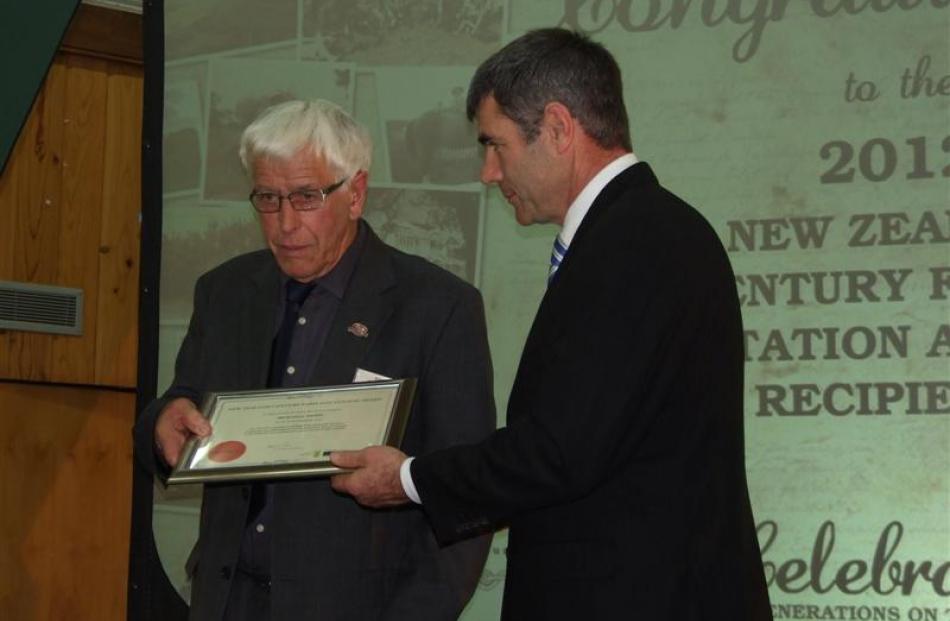 Long-term farmers were praised for their resilience and hard work, at the New Zealand Century Farm and Station Awards in Lawrence on Saturday.

Guest speaker Primary Industries Minister Nathan Guy said his dairy farm at Levin had been in the family for 80 years, and he hoped to return to Lawrence in 20 years to receive a century farm award.

''Our country isn't that old, and history is important. Tonight is an opportunity to look back at our pioneer farmers.''

The resilience of farming communities and family was on display at the awards, he said.

The awards recognise families who have owned the same farm for a century or more, and are held annually in Lawrence.

A South Otago family was one of two families presented with a sesquicentennial award marking 150 years or more of farm ownership.

John and Annette Moore own two farms - the home farm at Pukepito, near Balclutha, and the other at Berwick.

Mr Moore's grandfather, George Moore, bought the Pukepito farm from the estate of William Pillans in 1892.

Mr Moore's great-grandparents, Donald and Anne Campbell, bought 123ha at Berwick in June 1862. Now, 58ha of the original farm remains, and is farmed by Nicholas and Nadene Moore.

The Gordon family, which owns the 809ha Clifton Station at Hastings, also received a sesquicentennial award. They were not present to collect it. The station has been in the family since 1859.

Clutha Mayor Bryan Cadogan said Lawrence was the ''right town'' for the awards.

''The district is very proud of what Lawrence stands for. We're proud of the people, the spirit, and the can-do attitude ... You [award recipients] can be rightly proud of your family and your achievements.''

New Zealand Century Farm and Station Awards Committee chairman Symon Howard said the evening and awards were about recognising farming families of past generations, as well as the present.

''Be proud of what your families have achieved.''

In December, Waitahuna man Russell Brown was named patron of the New Zealand Century Farm Awards, which recognises long-standing family farms, and on Saturday he received an award recognising his patronage.

Mr Howard said Mr Brown was the founding member and instigator of the awards.

He said Mr Brown came up with the idea while he and wife Anne were hosting North American tourists from Vermont and they mentioned their state century farm programme.