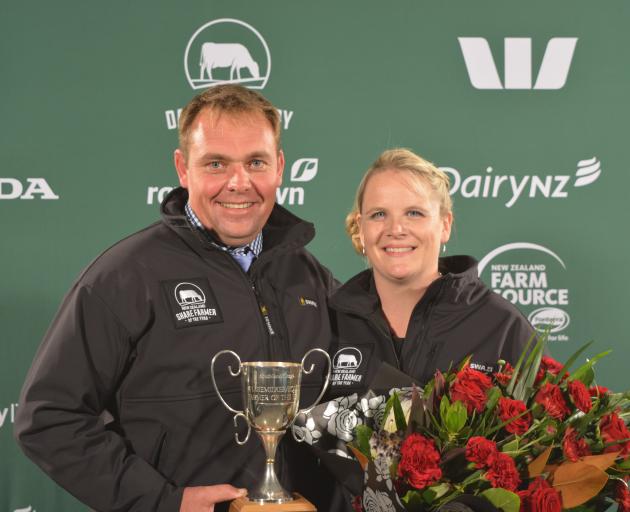 Rather, it was an opportunity to get feedback from judges to help them grow their business, Mr Bouma said.

The couple recently won the Sharefarmer of the Year title at the regional awards function in Invercargill, collecting $20,065 in prizes.

They sharemilk 762 cows on Andrew, Owen and Barbara Johnston's 270ha farm and it was the fourth time they had entered the awards. They have been sharemilking since 2002.

Every time they had entered, they had been able to implement some of the feedback from the judges, Mrs Bouma (37) said.

''We have continually improved our business and networked with other progressive and positive people in our industry,'' she said.

''Where else can you present your business to other like-minded people and professionals and get feedback on areas of improvement for just using your time?'' Mr Bouma (40) said.

The networking aspect was ''huge'', meeting people who were like-minded. Not just other competitors but also the judges gave their time and feedback, which added value to what they were doing, they said.

They believed good staff management had stood them in good stead to help them achieve their business goals. They had also supported staff to progress within the dairy industry.

Mr Bouma has been in the dairy industry since leaving school. Farming was something he had enjoyed from a young age as he recalled raking hay when he was 11 or 12.

''I just enjoy being out there on-farm and doing it,'' he said.

He had no regrets about entering the industry, saying he reckoned he had the best of both worlds. He was able to work outside while also enjoying a lifestyle that meant being able to spend time with family and friends.

Mrs Bouma, who trained as a social worker, has been on the farm helping with the business, since the arrival of the first of their three children.

As far as the recent difficult years in the dairy industry, Mrs Bouma said they had been involved long enough to understand there were peaks and troughs.

It was about making sure they set themselves up well in the peaks to be able to handle those troughs and lower payouts, she said.

The couple were now in their fourth season at Clydevale, having moved south from Taupo to an area where they ''didn't know a soul''.

They had found it an ''absolutely amazing'' community, with very welcoming and hospitable locals, Mr Bouma said.

The attraction of moving south was largely the reliability of grass growth through the summer months.

The Bouma family was now preparing to move back to Taupo, having last month been offered an 1100-cow sharemilking job.

While they would be sad to leave Clydevale, the new job was a very good opportunity for them, Mrs Bouma said.

The couple will represent Southland-Otago at the 2017 New Zealand Dairy Industry Awards in Auckland on May 6.

Jared and Sara Crawford, who contract milk for Ian and Annette Tulloch on a 600-cow property at Gore, were runners-up, and Jeremy Smith and Michelle Oldham-Smith, from Waianiwa, were third.

Dairy manager of the year Ann Linton, who is assistant manager on an 800-cow farm at Gore, was previously dairy farming in Scotland and has been in the New Zealand dairy industry for five years.

Angela Nicholson (24), of Otautau, was second, and Matt McKenzie (25), from Invercargill, was third.

Ben McLean (22), from Lumsden, won Southland-Otago Dairy Trainee of the Year. Tane Boyce (23), from Balfour, was runner up, and Brooke Buchanan (20), who works for the Telford dairy unit at Waitepeka, was third.

Mr and Mrs Bouma will host a field day on April 11 and Ms Linton and Mr McLean will also make presentations.

Next year, the national awards dinner will be held at ILT Stadium Southland in Invercargill, the first time the event has been held in the South Island since Queenstown in 2011.

General manager Chris Keeping said it had been a goal for a while to hold the nationals in the South Island but the earthquake had ruled Christchurch out until 2020, when the city's new convention centre was due to be ready.