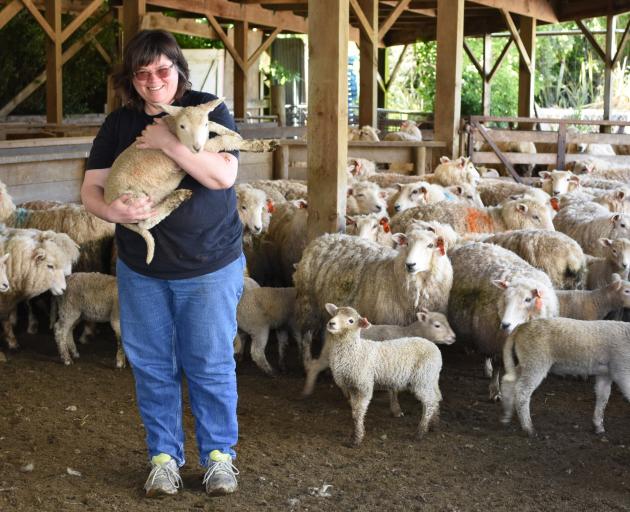 Dr Juengel, recently named one of 19 new Fellows of the Royal Society of New Zealand, is principal scientist with the reproduction team, based at Invermay.

Living in Otago meant she was a long way from where she grew up on a dairy farm in Michigan in the United States. It was that upbringing which she attributed to whetting her interest in agricultural research, particularly reproductive research, as she became interested in why some cows failed to become pregnant.

She studied at Michigan State University and the University of Missouri and it was during her  postdoctoral studies in Colorado that she started working with sheep.

In 1998, Dr Juengel began work at AgResearch’s Wallaceville campus, in Upper Hutt. She was encouraged by an elder sister, who had been working in Hong Kong and recommended working overseas as a good experience. Dr Juengel committed to staying in New Zealand for two years  but "really liked it out here" and shifted south to Invermay at the end of 2007.

Her research focused primarily on explaining how genetic mutations in sheep  influenced their reproductive outcomes.

A major outcome of her research was the identification of the oocyte (a cell involved in the reproductive process) as the major influence on boosting or inhibiting fertility.

Her contributions  helped to explain why some species had large litters while others were restricted to only one to three offspring. This had led to the development of five patents.

Passionate about agricultural science, Dr Juengel said she wanted to make a difference for farmers. She was surprised and excited by the fellowship. While  recognition of her work, equally it was recognition of the work of many other people within AgResearch and further afield, she said.

She was full of praise for colleagues she  worked with in both campuses and also collaborators, as she was involved with staff at the University of Otago and Victoria University.

"I’ve had a great deal of support over the years from mentors and colleagues and there’s no way I could have achieved this award, or undertaken my work, without their support and advice," she said.

Her primary focus at the moment was looking at improving reproductive efficiency. While principally working in sheep, she was also doing some work on dairy cattle.

Dr Juengel's role is  one that is  scheduled to relocate to Lincoln, as part of AgResearch’s restructuring and she said that was a decision she would have to make at the time, she said.

She had no regrets about her shift to New Zealand and the main potential driver if she was to ever return to the US would be family, she said.

Her brother had since taken over the family dairy farm from her father, milking about 200 cows, and she often had discussions with her father about the dairy industry.

When she first came here,  she found she had a lot to learn about dairying here as the system was very different from what she was used to in the US.

"Jenny has an excellent track record which spans the full spectrum from fundamental science through to the practical application of that science on-farm."

● Prof Grant Montgomery, who has links with Otago and is now at the University of Queensland, was made an honorary fellow.

He pioneered genomic methods for production trait identification in farm animals and contributed to worldwide genome mapping for complex diseases, leading to breakthroughs in diseases like endometriosis.

He completed a PhD from Massey University and worked at AgResearch and also in the biochemistry department at the University of Otago, where he co-founded the New Zealand sheep genomics programme and pioneered the introduction of genome mapping methods in farm animals. He moved to Australia in 1999.