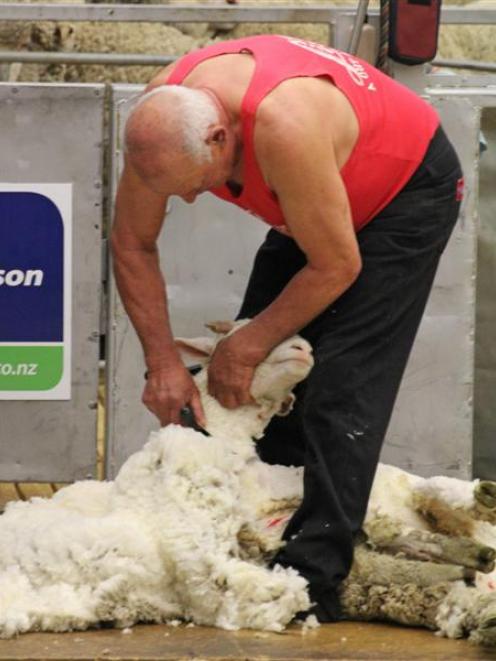 When shearing identity John Hough decided to make his last stand before retiring and contest the national shearing sports circuit, some of his mates decided to accompany him.

It was the least the group could do for someone that Mr Harraway described as a ''hell of a man''.

The Last Stand, which got under way last year, competed at Balclutha earlier this month and also at Gore at the weekend, before heading north for more competitions, including the Golden Shears, in Masterton and the New Zealand shearing championships, in Te Kuiti.

The last event on the circuit will be at the Mackenzie Highland Show, in Fairlie at Easter.

Mr Hough, who lives in Rakaia, has dedicated much of his life to shearing and had been involved in most facets of the sport - including as a competitor, judge, examiner, referee, on the national and South Island committees, and as a New Zealand manager.

He has also been an instructor and loved helping young shearers. Very much a recognised name in the sport, he commanded ''so much respect and mana'' from those involved, Mr Harraway said.

A modest man, he was not seeking the attention that he received over his quest to complete the circuit as his swansong.

''After a lifetime of being involved, one way or another, he just thought he was going to cruise around all the shows. He just thought he'd sneak around,'' Mr Harraway said.

It was highly unusual for someone aged nearly 70 to be competing in the open grade and he was definitely an inspiration. In his prime, he was arguably the fastest shearer in the world, Mr Harraway said.

He was accorded Master Shearer status in 1986 and featured in a world three-stand ewe-shearing record in 1989. He judged at the world championships in Norway in 2008.

The other members of The Last Stand had not shorn in competitions for quite a few years. All, however, had been heavily involved in the sport, including judging and commentating.

Mr Harraway (47), a shearing commentator, had not shorn competitively for about 15 years. With the exception of Mr Wilson, a world champion in the 1980s, none of them had been exceptional competition shearers, he said.

''We give each other a bit of ribbing every now and then. It's all good. It's not deadly serious. A couple of us have made a couple of the smaller finals, sometimes we might get through into the next round - even that alone is quite good,'' he said.

None of the group were shearing full-time, which made it ''pretty hard'' to compete, but nor did they want to disgrace themselves. There were not many shearers that were not competitive by nature, he said.

While the country's top shearers were trained athletes, who put a huge amount into their sport, The Last Stand's training sessions tended to revolve around ''a few quiets'' at the local pub on a Friday night.

Mr Hough had been appointed manager of the New Zealand team to travel to Ireland this year.