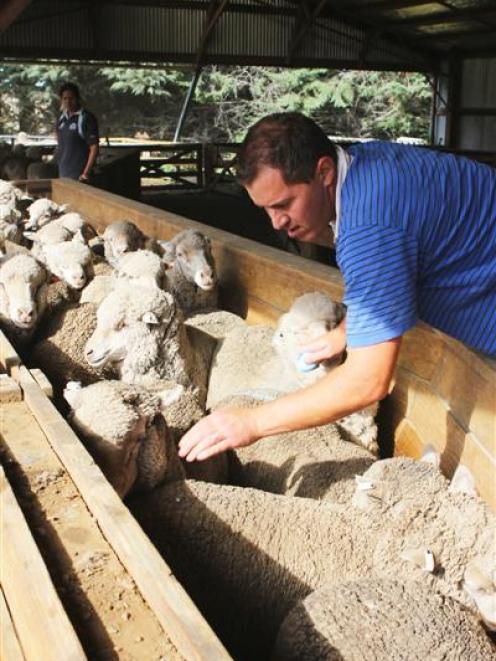 He is leading NZM's production science project, an initiative that aims to unlock the potential of ''the perfect sheep'' - one that was healthy, fertile and high-producing, with high-quality meat and wool fit for high-value markets.

The project is being co-funded by the Ministry for Primary Industries through the Primary Growth Partnership.

Dr Ferguson grew up on a farm in Victoria which was mostly cropping, with some sheep, and his brother started a Poll Dorset sheep stud.

He studied agricultural science at university in Melbourne and while later working for the State Department of Agriculture he ended up doing a lot of sheep nutrition-type work.

Under a range of nutritional conditions, some sheep ''crashed'' while others coped and it got him intrigued in the genetics that underpinned that robustness.

''Basically my interest in life is how you get the right genetics on the right farms and optimise the whole thing,'' he said.

He later completed a PhD in Perth and worked in Western Australia in a research position and also doing some lecturing. His involvement with NZM began when he started doing consulting work for the company and he was later offered a job.

Dr Ferguson said he had watched the growth of merino clothing company Icebreaker over the past decade, he knew about NZM and he believed it was a ''huge opportunity''.

He hoped to be able to help make a real difference as part of a team that aimed to produce better, more efficient sheep.

''Kiwi farmers are just as much fun as Australian farmers to work with. It's an awesome job ... I just really enjoy the company and the job,'' he said.

Dr Ferguson believed there was a ''massive opportunity'' for fine wool sheep, with meat attributes, globally.

While there would always be a more traditional merino system, with some properties unable to either run reproductive sheep, or not many of them, due to the type of country, there was so much potential in ''middle ground'' hill country, in the likes of North Canterbury and Otago.

Work was also being done to find solutions for footrot and if footrot became less of an issue, he believed, the ''gates will be opened''.

Dr Ferguson will be speaking at a production science field day at Hawarden in North Canterbury on Wednesday, where the progeny of 40 rams bred at NZM's central progeny test site at Waipara will be on display.

In April, they were mated via artificial insemination to rams sourced from New Zealand stud breeders as well as rams specifically selected from Australia.

It was thought to be one of the bigger AI programmes to be undertaken in the New Zealand sheep industry.

Data from the CPT progeny would be collected to provide a data set that would be used to demonstrate various factors including the wide range in performance of industry sires, an estimate of the genetic parameters for footrot, identifying rams that performed well on non-traditional merino country, lamb survival, footrot and worm challenges, wool measurements, wrinkle and dag score, fleece rot and fly strike, fat and muscle, growth rates, and female reproduction.

The field day would give breeders and other interested people and opportunity to look at the progeny at weaning, Dr Ferguson said.

A comprehensive overview of the production science programme would be provided with 10 speakers addressing the day.

They included Dr Jason Trompf, a nutrition specialist from Australia; agronomist and lucerne specialist Dick Arnst, Dave Anderson, from Bog Roy Station, at Omarama, on forage development on the property, Graeme Ogle on the economics on dryland development, and Wayne Cameron giving an update on Silere Alpine Origin Merino.

The day would cover genetics through to feeding and the end market, Dr Ferguson said.