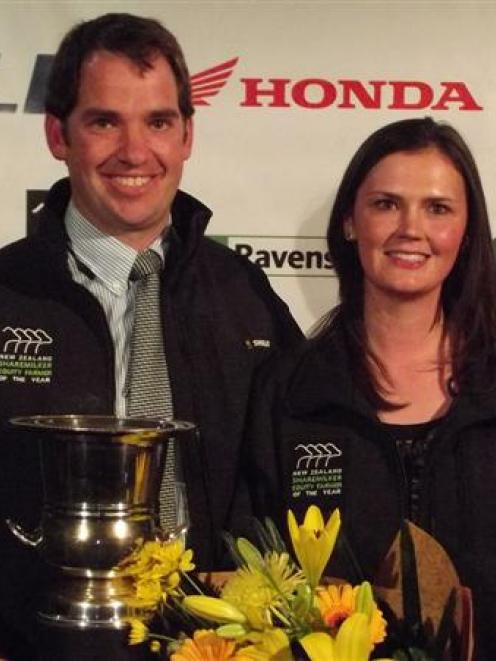 Mr and Mrs Easton, who are 50% sharemilkers at Papakaio, on the lower Waitaki Plains, were recently named the 2013 Canterbury-North Otago Sharemilker-Equity Farmers of the Year.

The couple have spent the past five years developing the 365ha property, owned by Mr Easton's parents David and Clare, and have increased cow numbers from 450 to 1350.

Mr Easton (30) was originally from the Waitaki Valley, where both his father and grandfather were mixed farming and cropping farmers.

The property was converted to dairy in the early 1990s and sold, before the family moved to the northern side of the Waitaki River and purchased another sheep and beef farm and converted it to dairy. The Papakaio property was bought in 2008.

On his return to New Zealand, he worked for Dexcel (now DairyNZ) for 18 months, based out of Dunedin.

He then was awarded a Fulbright Scholarship and obtained a master of science degree in agricultural economics from Purdue University, Indiana.

While in the US, his parents advised they were looking at the Papakaio property and the possibility was discussed of him returning home to help them develop and run the property.

It was an opportunity to have input into the development of the farm and work alongside his parents, with whom he had a close relationship, he said.

Originally from a farm in the UK, Mrs Easton (27) has a bachelor of arts degree in geography and management from Leeds University.

She worked as an assistant accountant until the couple's first child, Lockhart, was born last year.

Since his arrival, she had been a stay-at-home mother and become a lot more involved in the farm, which was great, Mr Easton said.

Both were well educated in fields supportive of an agribusiness career, which they believed was important when running large-scale dairy farms.

''Large dairy farms are big businesses with significant turnover and numbers of people employed. We feel the knowledge gained from our education has undoubtedly helped us achieve our farming goals to date,'' Mr Easton said.

The couple were first-time entrants in the New Zealand Dairy Industry Awards. They went to the first dairy awards dinner in 2005 and entering was something they had wanted to do since.

But, as they had been developing the farm over the past five years, they did not want to enter until they thought they could give it their ''really best shot''.

They spent a lot of time preparing for the competition and their presentation to the judges was the best it could be, he believed.

A bonus of entering was that it made them justify to themselves what they were doing, before they justified it to their judges.

As a result, they would be making some changes to one or two of their farming systems for next year.

The Canterbury/North Otago Dairy Industry Awards dinner was held in Ashburton and Mr Easton reckoned that he and his wife had not seen each other so nervous before.

It was a ''really awesome'' night and they were thrilled to win. Mr and Mrs Easton, who encouraged others to enter the awards, received prizes valued at $18,600. They were grateful to the sponsors and conveners.

They will host a field day on their property at 732 Papakaio Rd on April 30 at 10am. The next round of judging, for the national final, will be held in mid-May and the national final will be in Wellington on May 24.

The couple would love to follow in the footsteps of last year's Canterbury-North Otago representatives, Enda and Sarah Hawe, from Ashburton, who won the national final.

Mr and Mrs Easton's goal was to own an 800-cow dairy farm within five years. To help achieve that, they run an expanded artificial insemination programme to increase young stock and improve herd breeding worth.

They also planned to take on a second sharemilking position within two years, Mr Easton said. They wanted the farm they purchased to be within a two-hour drive of where they currently farmed. Farming and family ''go together for us'' and they enjoyed the area.

They had a lot of involvement with people in the US, and when they came out and visited, they went ''home in envy'', he said.

The finalists had a range of backgrounds and experience in the industry but all were working hard and achieving great results in their various positions.

That was helping them to progress their career and grow their equity to take the next step in the industry, national convener Chris Keeping said.