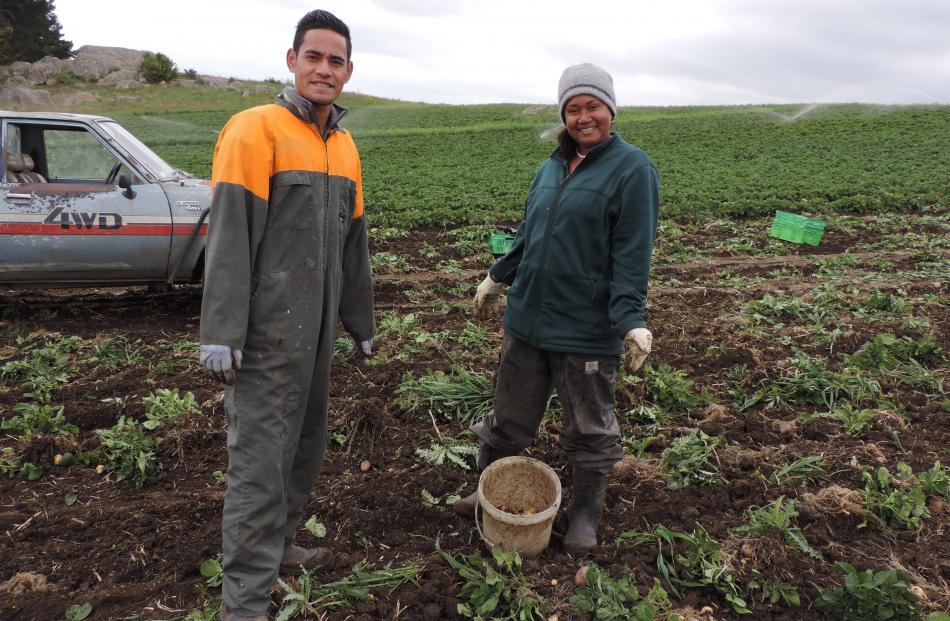 Pausing for a breather in the midst of picking organic Jersey Benne potatoes for Marty Quennell are Sitaake Sotanga (left) and Lizi Peckham. PHOTO BY SALLY BROOKER

North Otago's most famous produce is being harvested for the new season.

Rows of Jersey Benne potatoes are coming out of paddocks in the Totara area just south of Oamaru, renowned for the tarry, fertile soils that produce exceptional early spuds.

A workforce boosted by tertiary and secondary students as they finish their exams is picking and packing the Jersey Bennes.

Organic horticulturist Marty Quennell said his harvest started early this year - the week before Labour Weekend. That meant he had the market to himself for the first three weeks, when a premium price was being paid. With others growers now getting going, the price would drop back, he said.

Conditions in the paddocks were ''very dry'', Mr Quennell said.

Not only has there been a lack of rainfall in North Otago, but the El Nino southwesterly winds have also taken moisture out of the ground.

The quality of his potatoes was good, he said. However, he had heard that some crops were ''a bit small and dry because of the lack of water''.

Mr Quennell has a labour force largely made up of Polynesian workers who lived in Oamaru and returned to the paddocks each year.

''They're very happy in themselves. They have a good laugh.''

His organic Jersey Bennes were sent to Fresh Direct bases in Christchurch, Wellington and Auckland, the latter taking a large proportion of his output.

He also sold them in Queenstown and Dunedin, at his Brydone Wholefoods shop at Totara, and at the Otago and Oamaru Farmers' Markets.