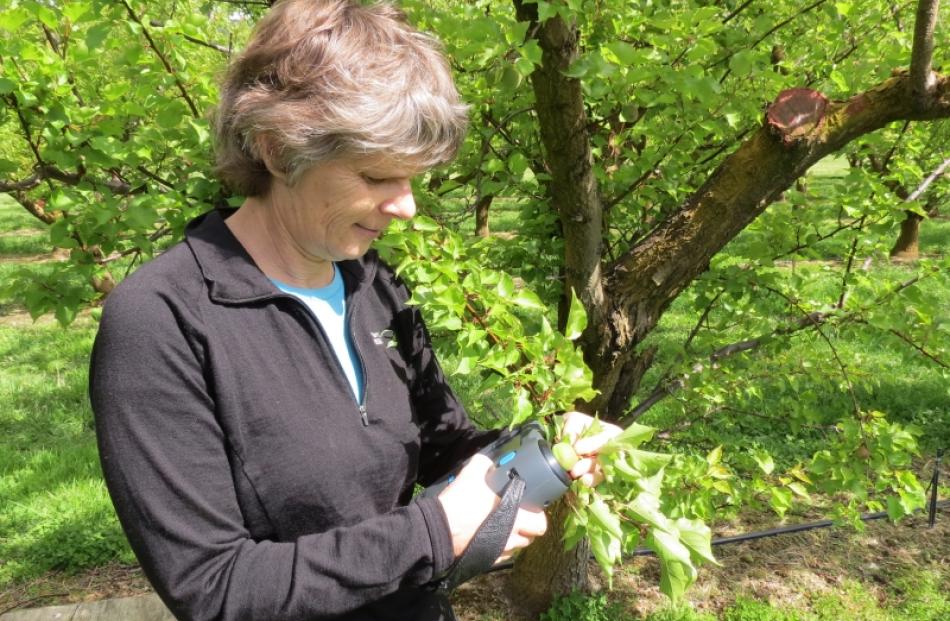 Plant and Food Research scientist Jill Stanley, based in Clyde, and fellow scientists are researching fruit respiration and ethylene production, as well as fruit maturity, light levels, wood age and atmospheric modification. She is using a near infra...

Research being carried out at Plant and Food Research (PFR) in Clyde will contribute to higher-quality and better-tasting apricots that ripen more slowly and reach overseas markets in better condition.

Scientist Jill Stanley, based in Clyde, and Dr Ringo Feng, who is based in Auckland, are looking at fruit respiration and ethylene production, as well as fruit maturity, light levels, wood age and atmospheric modification.

Ethylene is a naturally-occurring gaseous hormone given off by the fruit, which accelerates ripening. A range of seedlings have been bred at the Clyde Research Centre which have characteristics that include low ethylene production.

''That is pretty exciting as the fruit has the potential to soften and ripen more slowly, but we need to see if they have other characteristics that make them suitable as new cultivars, such as suitable fruit characteristics, flavour and good yield,'' Mrs Stanley said.

It will also form the subject of her doctoral thesis, which she completes in about six months.

''The work we have done is part of the PFR's whole programme on apricots,'' Mrs Stanley said.

The research team has been working with local coolstore owners to determine the best temperatures for storing fruit, as ethylene production and respiration occurs more slowly at lower temperatures.

Fruit softens more slowly at 0degC than at 4degC, a temperature which might be found in a domestic fridge.

Plant and Food Research molecular biologists are developing molecular markers that identify the parents of each seedling, much like fingerprints.

''We will be able to take samples of a particular seedling and know if it has a particular trait, like low ethylene production, to speed up the progress of selection.

''That is quite exciting and we can make rapid progress.''

She said they had carried out other research projects including using modified atmospheric bags on fruit, which change

Water loss is part of the fruit's respiration process, and affects its weight.

''Although there were a few problems with chilling disorders, we did see less water loss and fruit remained firmer.

''I think it showed there is potential for using modified atmosphere bags, particularly for the low ethylene selections.''

Pre-harvest work includes looking at light levels in the tree canopy to determine how light penetration into the canopy affects fruit quality.

They also trialled reflective cloth on the ground under the trees, which increased light levels in the lower canopy and improved quality.

''We also looked at changing the distribution of fruit on the tree, with more fruit near the top and less on the bottom, done during thinning.

''The fruit at the top had larger fruit size, more soluble solids [sugar] and the dry-matter content was much higher but it also meant there was more fruit for people to pick from ladders.''

They have also done some research on fruit maturation and when is exactly the right time to pick. Another pre-harvest study looked at the difference in quality of fruit on wood of different ages.

''We found that fruit on the base of a 1-year-old wood is better quality than fruit nearer the shoot apex.

She said they wanted to determine a balance between too little and too much thinning so there was enough fruit yield to keep the grower happy, while ensuring there was not an overload, which would affect sugar content, size and flavour.

The research evaluating the effect of pre-harvest factors on apricot fruit quality will also form the subject of her doctoral thesis, which she hopes to complete in about six months.