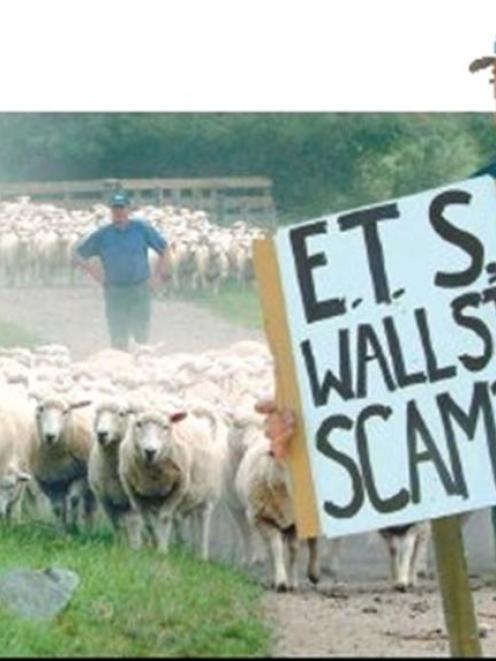 "The ETS is based on politics, not on facts." - Lovell's Flat sheep farmers and Balclutha protest organiser Rick Cameron.
Cracks began to appear in the Government's traditional rural support base over the introduction of the emissions trading scheme (ETS) as farmers took to the streets in Balclutha yesterday and a National Party branch chairman threatened to resign.

The ETS comes into effect in two weeks.

Seventeen farmers took part in the protest on the main street.

Organiser Rick Cameron said the ETS was a very serious issue that affects all New Zealanders, not just farmers.

"They [politicians] are saying other countries won't take our products - that is unfounded.

"The ETS is based on politics, not on facts," he said.

Mr Cameron runs 4500 sheep on a farm at Lovells Flat, and said all the ETS was doing was reducing his profit.

Deputy Prime Minister Bill English's National Party Balclutha branch chairman, David Botting, was unable to take part in the protest when he was hospitalised after cutting his arm on a circular saw constructing a protest sign.

But he added to the dissent by threatening to resign in protest at the ETS which, he claimed, was being driven by officials and pressure groups.

"I think politicians have been given a hospital pass with this one," Mr Botting said.

The Balclutha protest came as Federated Farmers mounts its second concerted campaign against greenhouse gas taxes, having forced the former Labour Government to drop its tax on livestock methane.

Federation chairman Don Nicolson said the costs of ETS on the economy exceeded any environmental benefits and the public had no idea what was looming.

Opposition among farmers remains widespread, prompting protests outside National Party meetings and a call for the establishment of a country party.

That tension could come to a head on Friday next week, when Prime Minister John Key and Agriculture Minister David Carter address the Federated Farmers conference in Invercargill.

Mr Botting has told Mr English that after extensive researching of the science of climate change and from talking to people, he had concluded the ETS would harm the economy for little or no environmental benefit.

"I think the ramifications of the emissions trading scheme on the economy are far greater than politicians think," he said in an interview.

From July 1 the fuel, electricity and industrial process sectors will have to account for their greenhouse gas emissions by buying carbon credits, with that cost passed on to consumers.

The Ministry for the Environment has calculated it will cost an average household $165 a year through a 3.5c a litre increase in fuel and 1.5c a kWh rise in electricity charges, but there will also be secondary cost increases through higher freight and manufacturing charges.

Farming comes into the scheme fully from January 1, 2015, when farmers will have to account for methane and nitrous oxide emissions from animals and fertiliser.

Mr Botting said the Government was unlikely to walk away from the policy, but he was reserving his decision on whether to resign until he saw if there were any changes.