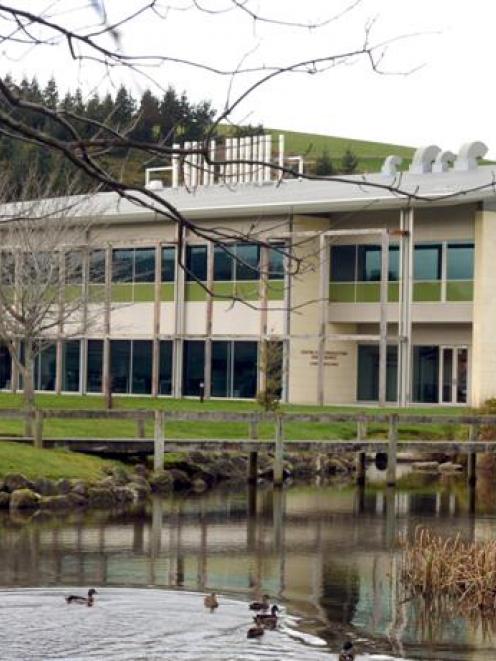 In less than three weeks before a proposal to relocate 85 Invermay jobs will be decided on by AgResearch; pictured, Invermay's genomics building. Photo by Stephen Jaquiery.
Southern sheep farmers are being urged to get vocal in efforts to have AgResearch drop its proposal to gut Invermay of more than 70% of its staff, and move elsewhere.

With southern lambing fully under way and the decision on Invermay's future looming, there appears to be an air of complacency about some farmers.

AgResearch's restructuring proposal calls for jobs at Invermay be cut from 115 to 30 and a further 180 jobs to be cut from Ruakura near Hamilton, with those respective positions moved to Lincoln, outside Christchurch, or to Palmerston North.

Following staff consultation, AgResearch's final decision will be made on September 27.

As with a call to deer farmers, Mr Woodhead said sheep farmers should similarly be expressing their opinions to politicians and industry leaders.

''The pastoral sector is crucial to growth in Otago, it still underpins the economy,'' Mr Woodhead said.

Long-time ram breeder, farm award winner and sheep breeding stalwart Errol Holgate was contacted and said rather than Invermay facing relocation ''there should be retention and extension'' of the facility.

''It would be a hell of a loss if Invermay was finished ... leaving 30 [staff] at Invermay is just a subtle way of slowly closing the gate,'' Mr Holgate said.

While farmers were individually talking about the loss and ''very unhappy'', he conceded sheep farmers ''had not done much'' in lobbying against the proposed changes.

He encouraged farmers to get in touch with industry associations and councils, local councillors and MPs and make their views known.

''They need to make their thoughts known because once the decision is made, it'll be too late,'' Mr Holgate said.

Southern South Island chairman of the Lamb and Beef New Zealand-funded Farmer Council, Paul Corboy, was contacted, and said Invermay was ''vital'' to sheep farmers, on both its specific research, especially genetics and recently triplets management, but was also just important in getting the wide variety of research passed on to farmers.

He could only speak on behalf of the Farmer Council, but noted that a lot of research funding for AgResearch came from Beef and Lamb.

''Having people in ivory towers in Lincoln and Palmerston [North] will do nothing for farmers in Otago,'' Mr Corboy said.

The pastoral sector's importance was highlighted by Mr Woodhead, who cited Port Otago's recent, strong full-year result as an example, with logs, dairy products, refrigerated meat and apples having underpinned one of its best years, and delivering a $12 million dividend to 100% owner, the ORC.

Mr Woodhead, who also farms sheep and beef in South Otago, reiterated the potential loss of widespread collaboration between Invermay and the University of Otago.

Dr Allison said after the letter had been sent to deer farmers, there had been a ''terrific'' response.