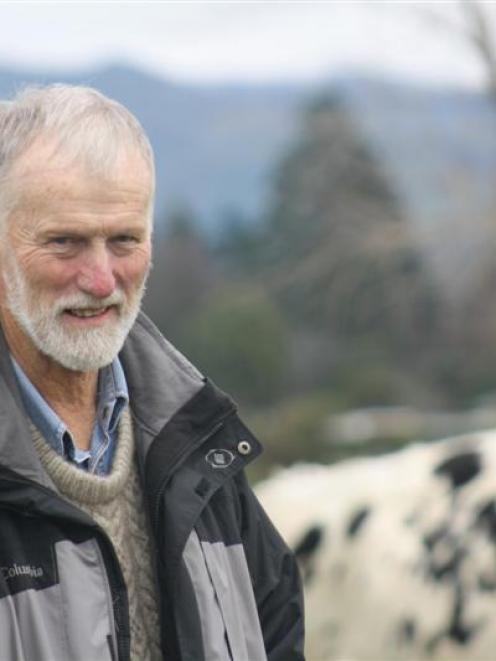 The Outram farmer, who is the third generation of his family to belong to the association, was presented with a distinguished service award at HFNZ's recent annual meeting in Masterton.

Dale Collie, of Carterton, also received the award, which recognises members who have contributed to the Holstein Friesian breed and the association at regional and/or national level.

The announcement took Mr Robertson by surprise, despite his wife Lorraine having delayed a trip so they could attend the conference. He enjoyed his involvement with the organisation, saying it was the people who ''made it''.

Mr Robertson was still at secondary school when he bought his first cow in 1967. He joined the association two years later and registered his first pedigree animals in 1975, under the Jaydee stud prefix, part of the herd coming from his father's Rannoch stud.

Since then, he has been involved with Holstein Friesian New Zealand in many capacities, including serving on the board from 1985 to 2000.

He was also the Otago committee publicity officer and functions organiser for many years and had exhibited with success at Taieri and Otago A&P shows.

As well as having been a senior judge, Mr Robertson was the longest continuing classifier, having started in 1991, and that work took him throughout the country inspecting cattle.

Dutch Friesian cattle were first imported to New Zealand by Canterbury breeder J.C.H. Grigg in 1884. Early endeavours by breeders to keep accurate pedigrees resulted in the establishment of the New Zealand Holstein Friesian Association in 1910.

Mr Robertson's father, Peter, along with Basil Parkes, compiled a book recording the development of the association and the breed to mark the association's centennial in 2010.

Mr and Mrs Robertson sold their dairy unit several years ago and built a new home on part of their property, where they now run dry stock and he also does some casual work.

There had been a ''huge'' improvement in the standard of cows over the years and, while there was still room for improvement, the breed was heading in the right direction, he said.

Like many other organisations, more members were always needed. Membership had dropped over the years but those involved were more active than in the past, he said.

Henley Farming Ltd was third in the senior and second in the junior section of the Merial Ancare progeny competition, while the Taieri Dairy Co Ltd was the overall winner of the Nutritech performance awards.

Owen Copinga, of Isla Bank, and Stephen Ray, of Clydevale, were elected to the HFNZ board, representing Otago Southland.