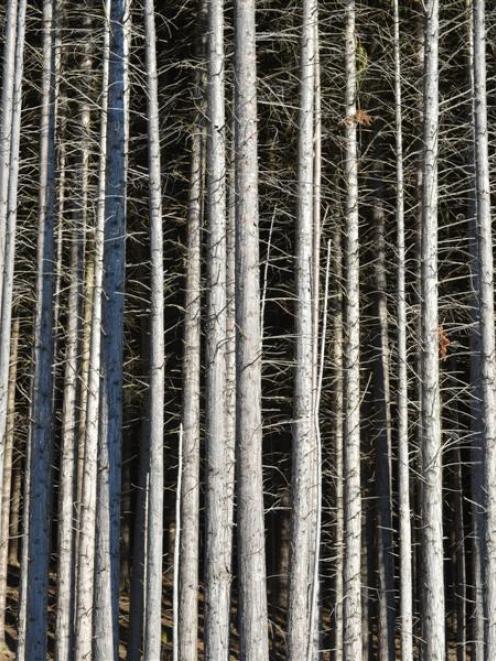 Proposed changes by the Government to the emissions trading scheme have riled the Parliamentary Commissioner for the Environment and the Forest Owners Association. Pictured: City Forests' plantation at Three Mile Hill, near Dunedin. Photo from ODT files.
The controversial emissions trading scheme (ETS) is going pear-shaped, with carbon credits plunging from $20 per tonne of emissions to $4.20 per unit last week. Senior business reporter Simon Hartley talks to ETS supporters who are highlighting the emerging anomalies and are alarmed over the Government's proposed changes to the ETS legislation.

The carbon price plunge is contributing to deforestation, lack of incentive for new plantings and making it more attractive to convert forests to dairying, tourism or lifestyle blocks - all boding ill for New Zealand to meet its 2050 target of reducing carbon emissions by 50%.

Forest Owners Association chief executive David Rhodes and Dunedin-based carbon broker Greg Fahey, of Venture Partners, both support continuance of the ETS and are calling on the Government not to let the ETS be weakened further. The legislation is before a select committee at present and facing major amendments.

Carbon credits started life around $20 in late-2010, but the New Zealand carbon credit, known as an NZU, was selling last week for $4.20 while eligible international credits were under $3 - the low prices driven by an oversupply of credits on the international market.

The Climate Change Response (Emissions Trading and Other Matters) Amendment Bill is before a select committee now, with proposals including extending the timeframe of giving subsidies to big polluters; such as free credits, a two-for-one provision and a $25 per tonne price cap.

In her submission on the Bill, Parliamentary Commissioner for the Environment Jan Wright said the proposed changes would further weaken the ETS.

"This is because the carbon market cannot operate without an effective price signal to incentivise changes in behaviour," she said.

However, the low carbon price is seen by some as providing a boon for pre-1990 forest owners, who can now buy cheap credits to pay for conversion liabilities and fell forests for conversion to other uses, such as dairying or tourism.

Mr Rhodes sees that scenario as counterproductive to the forestry sector and overall ETS scheme and its aims, saying for carbon forestry "to stack up as investment", a minimum carbon price of between $15 to $20 tonne was needed.

Mr Fahey calculated that a pre-1990s forest had faced penalties of $14,000 or more per hectare (when credits were $20) if forests were cleared and not replanted within four years, but last week's prices dragged that penalty charge to below $2000 per hectare.

On the other hand, the low carbon prices were painful for owners of forests planted since 1989 as they were eligible to receive and sell carbon credits for carbon stored by their trees as they grew, but at this week's prices it was not attractive for forestry investors.

Mr Rhodes said, "With carbon prices hovering around $5 a tonne, there is no incentive for emitters to invest in clean technology when even that price is halved for them.

"Nor is there the incentive for landowners to plant trees to store carbon," he said.

Mr Fahey said the return from carbon for the newer post-1989 plantings "just doesn't stack up" for forest investors at the moment.

"This highlights that the emissions trading scheme isn't working as planned," he said.

Mr Rhodes said the ETS remained the right mechanism to price carbon and reduce emissions, but it had been "significantly weakened" by previous Bill amendments, with more proposed changes before a select committee which "will weaken the scheme further".

Another concern to Dr Wright was that big polluters at present had 90% of emissions subsidised, which was to be phased out, but the present Bill would put the phase-out indefinitely on hold, she said.

"This makes a farce of our response to climate change," Dr Wright said.

The Government was also proposing that the agriculture sector, accounting for 50% of emissions and presently set to join the ETS in 2015, had its entry put on hold indefinitely.

She recommended that an emitter should be restricted to buying international credits to cover only up to 50% of its liabilities; meaning the balance would have to be in the NZU credits.

Mr Rhodes backed Dr Wright's suggestion that another option for Government could be to separate the NZU credits from international credits where carbon liabilities had to use 50:50 of each credit.

This would mean the NZU credit, making up the other 50%, would appreciate in value "some way towards the desired level [$15-$20]", he said.

Mr Rhodes said if the Government, through its proposed changes, wanted to see no new plantings and deforestation, then "that's its call".

"The Government has a right to change its mind, but in so doing it must recognise the long-term nature of a forest investment. This needs to be central to anything it asks of the industry," he said.

"At present carbon prices, it is once again economic for forest owners on suitable land to pay any conversion liabilities and convert forests to dairying, tourism or lifestyle blocks," Mr Rhodes said.

"The forest industry will not fade away and most existing forests will be replanted at harvest, but new planting for carbon will be virtually nonexistent and there will be deforestation," he said.

Instead, we have the opposite happening," Mr Fahey said.

Mr Fahey said the Government had "policy levers" available that would boost the carbon price, but they "clearly don't see that as a priority at the moment".

He said setting a "floor price" on carbon credits was an option, but noted it was very complex to set and administer, and had been discarded from other trading schemes.

On policy levers, Mr Rhodes said the low carbon price was essentially being "halved again" for emitters, as the Government offered a subsidy through the ETS, where instead of one credit per tonne, emitters were allowed to use one credit to cover two tonnes.

He questioned whether those emitters were passing on that gain when charging consumers.

Dr Wright said the proposed changes, such as locking in large subsidies to polluters and making the review of these subsidies optional, meant it was unlikely the ETS could significantly reduce New Zealand's greenhouse gas emissions and would "certainly not" reach the Government's 2050 target of reducing carbon emissions 50%.

"While previous legislation has weakened the scheme, the changes proposed in this Bill render it almost toothless," Dr Wright said.