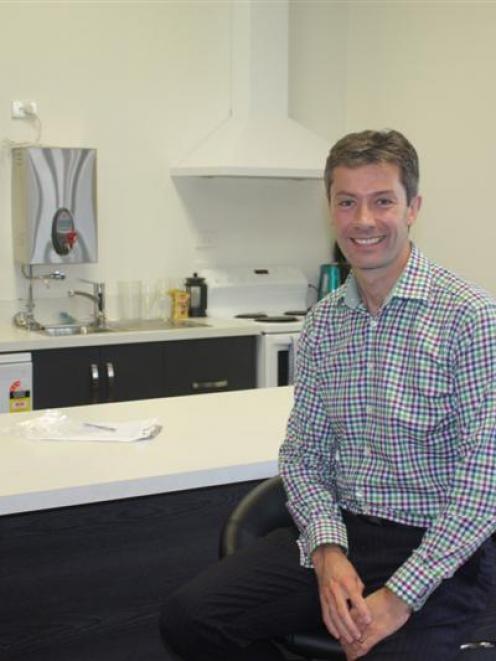 Finance Now co-owner Wayne Evans relaxes in the staffroom at the Invercargill head office. Photo by Allison Rudd.
How did Invercargill businessman Wayne Evans, whose favourite subject at school was sport, end up co-owning a successful finance company? Reporter Allison Rudd finds out.

The staffroom at the Finance Now head office in Invercargill is nothing short of luxurious. The furniture is sleek and comfortable. There is a full kitchen and a patio area with a barbecue. It's all part of Wayne Evans' philosophy.

He has a background in banking and IT, but he also has a diploma in psychology.

''My real interest and passion is human dynamics ... For any business manager, controlling the input is far more important to the output. So, if I get motivated, happy staff, who are well-educated and enthusiastic and they've got the right tools to do the job, then we will end up with happy customers and a strong loan portfolio.''

The philosophy is working. Since it was launched in October 2000, the SBS Bank-backed business has grown to well over $100 million in assets, becoming the 11th largest finance company in the country. It employs 110 staff in seven offices, including 45 staff in Invercargill.

Its customers are individuals and small business owners. It also has clients - a network of 1400 retailers who are encouraged to recommend Finance Now to anyone wanting hire purchase.

''Retailers have a choice of financiers. We don't require exclusivity. We are of the philosophy that we win their business every day through a mix of our people who visit their stores, the quality of our product and pricing, and our computer systems.''

After leaving Southland Boys' High School, Mr Evans joined SBS Bank, working as a lender, an investment adviser and in the marketing and projects department before joining the IT department and designing the bank's software system.

''Academics came late'' for him, he says. Over 10 years, he completed two tertiary qualifications extramurally - an accountancy degree from the University of Otago and a postgraduate diploma in social science majoring in psychology from Massey.

He has worked in the health sector, for ANZ bank and headed a company which ultimately became GE Money.

''I was based in Auckland and there came a point where I reflected on frustrations in dealing with an offshore head office and suggested to Phil Ellison, my sales and marketing manager, that we could perhaps do better. I approached [SBS Bank chief executive] Ross Smith ... As it happened, the SBS board had identified the opportunity to start a finance company, so it was very good timing for both parties.''

The decision to start a company required sacrifices for Mr Evans and Mr Ellison.

''My wife Nicola and I sold our house and all our significant assets and used that as our capital injection. Phil did the same. We were renting when we came back to Invercargill. Phil's first Auckland office was a room in his house.''

Why base the company in Invercargill?''Nicola and I grew up in Invercargill. We have four boys and decided raising them here alongside their grandparents would be a wonderful thing. The SBS head office is also here - that was an attractive proposition.''

The keys to the business are a software system called Qik, which was designed in-house, coupled with a statistical credit scorecard, also developed internally.

Using the internet, smart phone or email, people can find out within minutes whether their loan will be approved.

Qik ''talks'' to other software systems, including the Veda national credit bureau. The statistical scorecard uses criteria such as age and employment stability to assess the credit-worthiness of a potential borrower.

All that is done automatically by the computer system. What do Finance Now staff do? Mr Evans explains''For every 100 applications, some will be outright declined - we would never lend to them. Others get a perfect report and we would always lend to them. Our staff add in assessing customers falling into the grey area.

''That's a point of difference for Finance Now. We want to work with potential borrowers as much as possible to make the loan happen - as much as prudent for them and us. Under the Financial Advisers' Act, we are giving financial advice, and we take that role very, very seriously.''

Back in 2000 when the economy was booming, finance companies were ''popping up like mushrooms'', Mr Evans says.

But once the global recession hit, finance companies began tipping over. At least 50 have gone. Mr Evans estimates the figure might be more than 60.

''Lending money is really easy. Unfortunately, in finance, you really only make your money on a typical personal loan in the final three instalments. That means ... it is only at the end of two or three years you find out whether you made a good decision or not.

''There were periods where our competitors were lending to people if they fogged the mirror. They were taking a lot of risks. We didn't play in that game.''

By playing its own game, Finance Now is still here and was able to expand during the tough times.

In 2006, it bought $30 million of assets from the receivers of Western Bay Finance, and in 2008 bought $18 million of Provenco Cadmus lease rental agreements.