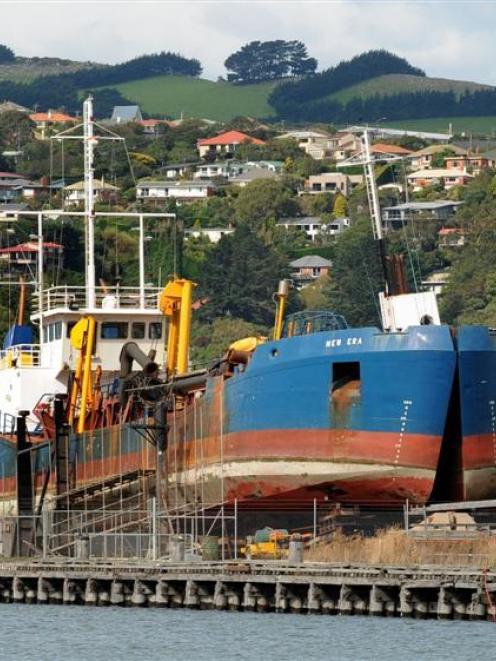 Plans by Port Otago to scale back how much silt will be removed during channel-deepening means all of the work can be done by the port company's own dredge <i>New Era</i>, pictured at the Kitchener St slipway. Photo by Stephen Jaquiery.
On the eve of Port Otago beginning its three-week resource consent application to widen and deepen 13km of the shipping channel, Senior Reporters Simon Hartley and Rebecca Fox recap the issues, submissions and process about to get under way.

Port otago is about to unveil changes to its contentious proposal to deepen and widen 13km of the shipping channel from Port Chalmers to Taiaroa Head, scaling back from the disposal of 7.2 million cubic metres of silt and sand out at sea to 2.5 million cubic metres.

Of the 195 individuals, groups and businesses who have made submissions on the proposal, 75%, or 148, are against the proposal.

Well over 100 submitters - a mix of those for and against - wanting to be heard and prompting the need for a three-week hearing; starting on April 4.

While Port Otago will still seek the same resource consents it originally applied for in May last year, it has extended the time frame of completing the work from a two-to-15-year programme out to about 20 years.

Both scenarios ultimately allow for the removal of a total 7.2 million cubic metres of spoil.

The project was initially budgeted at $80 million to $100 million for full deepening and widening to 15m deep, but Port Otago is scaling back the work into two stages, from dredging from the existing 13m deep to 15m, and instead going to 14m, costing an estimated $12 million to $20 million.

Subject to the hearing commissioners granting consent, dredging work could begin within months.

Initially, it would amount to about 500,000cu m of silt/sand being removed and dumped at sea over each of the next three years.

Port Otago has estimated that during the past 145 years, 34 million cubic metres of spoil has been dredged from the harbour channels.

The change in the plan, while it might allay some concerns submitters had, was not related to the extent of submissions, Port Otago's chief executive Geoff Plunket said, but to giant container shipping operator Maersk, which is Port Otago's largest customer.

Maersk said in February it now planned to incrementally phase in ships larger than the present 4100-container carriers, moving towards 4500- to 5000-carriers in coming years, as opposed to visits of ships of 6000 containers or more, which many in the industry had been expecting to occur sooner, rather than later.

Mr Plunket said deepening from 13m to 14m meant very little of the channel sides would have to be dredged, but taking another metre to 15m deep would mean dredging and changing the profile and sides of the channel.

The company was still seeking the same consent, over a 20-year period, to eventually deepen to 15m, because of the likelihood container ships will eventually get bigger.

However, given the proximity of the channel near the Aramoana salt marshes and the potential effects on recreational fishermen and sportspeople, surfing beaches and avian and aquatic wildlife, it is expected submitters will continue to express their environmental concerns, regardless of Port Otago's time-frame.

For many submitters, the effects of disposal are of most concern.

The dumped sediments, initially suspended in the seawater, will then settle both from tidal flows out of the harbour mouth and from dumping out to sea, 6.5km northeast of Taiaroa Head.

It is the first time Port Otago has dumped so far out to sea. Generally, spoil has been dumped close to Aramoana Beach.

Port Otago has said the sediment drift out at sea would be to the north and was expected to cover 12km to 15km of a sand bank in 27m of water. It would not interfere with Blueskin Bay, fishing grounds closer to Karitane, or affect wave height at Aramoana.

Port Otago has spent about $3 million during the past four years on researching the project and in its application last year came to the conclusion effects on the environment and coastline were expected to be minor, noting that the channel widening near the Aramoana salt marsh did not impinge on its boundary.

Mr Plunket said proposed dredging of a sand bar opposite Port Chalmers, to increase the available space in which to swing a larger ship around, was not required at present and would have accounted for a large percentage of the silt/sand removal.

He noted all the country's other major ports were in some way involved in channel work, Auckland having gained consent to deepen, Tauranga being in the consent process to deepen to 16m and Lyttelton having also lodged a deepening application.

"We have proposed a range of conditions and monitoring requirements to ensure that the actual impact from dredging is consistent with the effects detailed in the consent application," Mr Plunket said.

• In a separate project, using 45,000cu m of dredged sand, Port Otago wants to embark on restoration of a 200m stretch of Te Rauone Beach, near Harington Point, including a groyne. A resource consent application is expected to be lodged with the ORC shortly.

The original proposal was to deepen and widen channel from 13m deep to 15m deep over two to 15 years, removing a total 7.2 million cu m.

The revised Stage One will initially dredge from 13m deep to 14m over three years, removing 500,000cu m each year, followed by another three years' removal of 400,000 cu m annually - a total of about 2.5 million cu m.

Stage Two, depending on commercial requirements, will dredge from 14m deep to 15m deep but this is envisioned not within 10 years, but within 20 years. Total silt/sand removal from both stages would be about 7.2 million cu m.

Larger but fewer ships on the horizon

Shipping lines in general have lost billions of dollars during the global recession and are just beginning to recover financially.

In mid-2009, almost 1400 ships, representing about 9% of the global total of container, bulk cargo and tanker vessels, lay idle in ports throughout the world.

Most shipping lines scaled back by investing in larger ships that call less often but carry more containers, prompting ports around the world to dredge their channels to at least 15m to accommodate ships with draughts of 14.5m.

There is already a new generation of ships plying the world's waterways which have a draught of 14.5m, are between 300m and 347m long, and carry from 6000 to 8000 containers respectively.

Larger ships are planned, but their sheer size means they cannot navigate Otago Harbour; regardless of plans to dredge beyond 15m.