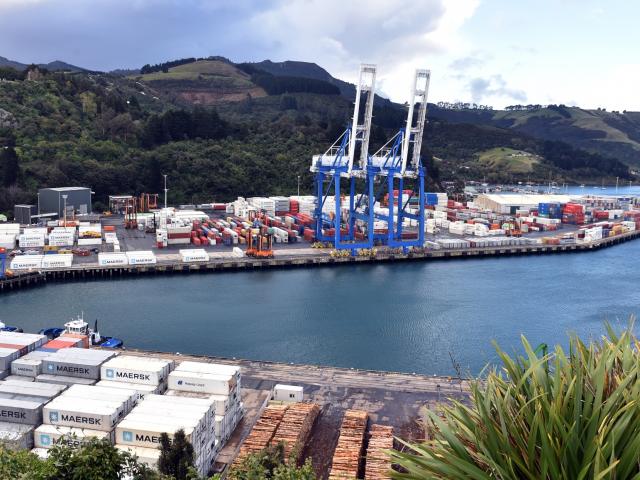 Worksafe has been notified after a side-loading forklift caught fire at Port Chalmers on Monday evening, injuring a worker.
City councillor David Benson-Pope says the Otago Regional Council and its companies should get out of the way of development on Dunedin's waterfront.
Port Otago has reaped a massive profit selling its contentious shareholding in rival Lyttelton Port of Christchurch (LPC) for $65.7 million, a 77% gain on the investment.

Port Otago's new $11 million tug Taiaroa is about halfway on its delivery voyage from Vietnam and is due to arrive in Port Chalmers later this month.
Port Otago does not expect to be forced into a race with competitor Lyttelton Port of Christchurch (LPC) over their respective plans to deepen shipping channels, with the possibility of larger container vessels coming to New Zealand in the near future.

Visits by larger container ships are on the horizon following commitments made by freight company Kotahi to the Port of Tauranga, Timaru's PrimePort and the world's largest shipping company, Maersk.
Last year's ''well publicised issues'' concerning operators and cruise ship passengers at Port Otago are over.

Port Otago's property subsidiary Chalmers Properties has increased its asset value from $83 million a decade ago, with subsequent purchases and developments, to recently push beyond $250 million for the first time. Senior business reporter Simon Hartley talks to Chalmers Properties general manager David Chafer about its widespread portfolio of investments, and market conditions.

Port Otago's land banking in Dunedin's upper harbour is slowly being expanded around Fryatt St, with five separate properties now covering about 6ha.
Being able to keep its general rate increase to 2.49% is good news but it is only thanks to the Otago Regional Council's ownership of Port Otago and its good investments, Cr Michael Deaker says.

Port Otago's new $11 million tug is on track to be launched this month in Vietnam for fitting out and sea trials, and is expected to be delivered and ready for service on Dunedin's harbour in August.
Port Otago can look forward to some return on its 15.5%, more than $50 million stake in rival Lyttelton Port of Christchurch, which is resuming dividend payments after three and a-half years.
An Environment Court battle over Port Otago's proposal to continue depositing dredging material at Aramoana, Heyward Point and Shelley Beach has been avoided.

Lyttelton Port of Christchurch (LPC) shares soared to a record high yesterday, prompting Port Otago to confirm that in February next year it will, for the first time, consider whether to sell its stake.

The return to health of the Dunedin City Council's multimillion-dollar Waipori Fund should not encourage councillors to consider selling it, the fund's head has warned.

A replacement lifting cradle is scheduled to be craned into place at Port Otago's Kitchener St slipway next week.
The Surfbreak Protection Society has lodged an appeal in the Environment Court against Port Otago's consents to continue depositing dredging material at Aramoana, Heyward Point and Shelley Beach.

Dunedin's reputation with cruise lines is among the world's worst, and behind the soured image are badly behaved tour operators, Cruise New Zealand says.

The first phase of $100 million of infrastructure spending by Port Otago was announced yesterday. A contract has been signed for a new $11 million tug, plus two container straddle crane orders worth $2.5 million.

Port Otago's 15.5% stake in Lyttelton Port of Christchurch (LPC) has grown in value by $5.6 million in recent weeks, in the wake of an almost 30% share spike since early April.