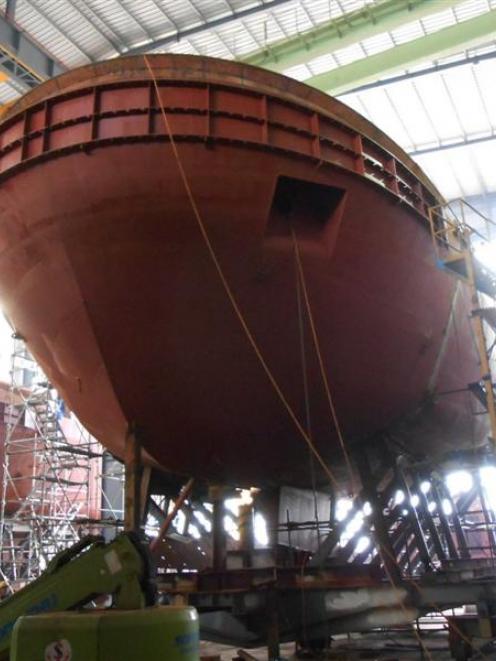 The bow section of Port Otago's new tug, Taiaroa, pictured in the Damen Group shipyard in Da Nang, Vietnam. Photo supplied.
Port Otago's new $11 million tug is on track to be launched this month in Vietnam for fitting out and sea trials, and is expected to be delivered and ready for service on Dunedin's harbour in August.

The tug, being built in Da Nang in Vietnam by Netherlands-based Damen Group, is part of up to $100 million in long-term infrastructure spending by the Otago Regional Council 100%-owned Port Otago.

Port Otago's chief pilot, Captain Hugh Marshall, said the construction had been straightforward, and other then specifying LED lighting, Taiaroa was a ''standard production''. It is the 63rd of its type built.

In recent weeks, the port company took delivery of two Finnish Kalmar straddle cranes, worth about $2.5 million, which are diesel/electric powered and can carry a container over a three-high stack.

Most of the infrastructure spending is aligned to Port Otago's channel-deepening ''new generation'' project, of which the start date is still to be finalised. Taiaroa will join Port Otago's other tug, Otago, which was delivered from a Whangarei yard about 10 years ago, for $8.5 million.

Port Otago's other two Dunedin-built tugs, the 40-year-old Rangi and 39-year-old Karetai, are to be put up for sale soon.

The two-crew 250-tonne Taiaroa is slightly larger than Otago at 24m long by 11.5m wide and has a bollard-pull of 68 tonnes, as opposed to Otago's 56-tonne pull.