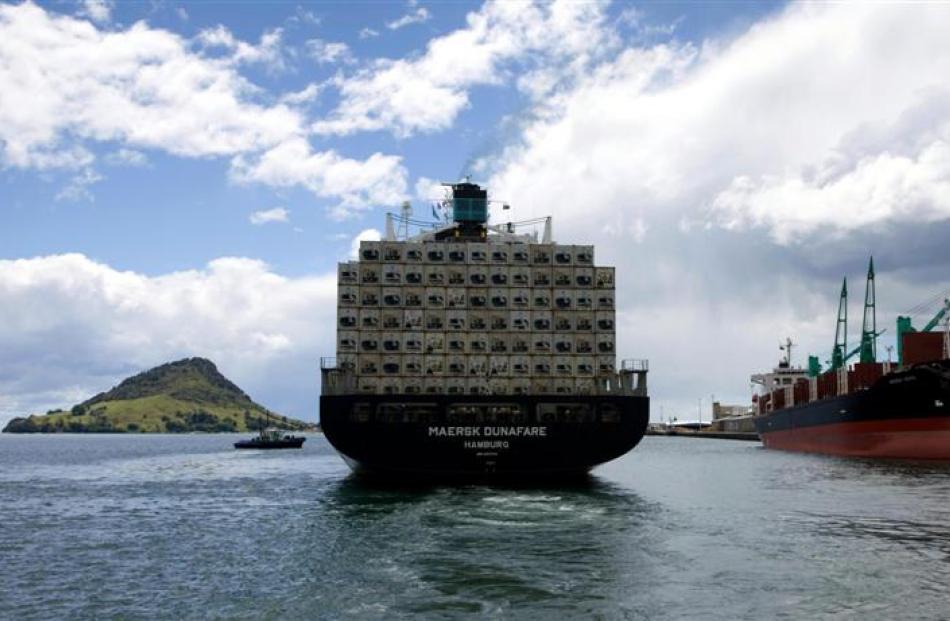 Port of Tauranga is taking the lead on port rationalisation. Photo supplied.

Visits by larger container ships are on the horizon following commitments made by freight company Kotahi to the Port of Tauranga, Timaru's PrimePort and the world's largest shipping company, Maersk.

However, with the arrival in two to three years of larger ships to Tauranga, the fight will be on for survival of the smaller New Zealand ports, a ''port rationalisation'' which has been mooted for the past decade.

Freight company DCB International's director Mark Willis said the pressure would mount for ports to host the ''big ship'' visits in both the North Island and South Island, increasing from the present vessels rated 4100-4200 TEUs (twenty-foot equivalent containers) to 6500 TEUs.

''This is the catalyst for the move to get bigger ships in worldwide. Maersk want the largest ships and market domination,'' Mr Willis said.

Kotahi, which is a joint venture between Fonterra and Silver Fern Farms, yesterday announced separate commitments to Tauranga, Timaru and Maersk to deliver freight over a 10-year period, while Tauranga's port is to work toward hosting 6500 TEU vessels ''within the next few years''.

Last August analysts were unsure of the business model Tauranga had in mind, but there was speculation at the time Tauranga would try to attract a large shipping line to commit to visiting Timaru. Mr Willis said the larger 6500 TEU ships were faster, more fuel-efficient, could carry more containers and were more eco-friendly.

For the past two years there had been no repeat of peak season freight space shortages in the South, which suggested the sector was ''over-tonnaged'' at present.

The scenario could see more downward pressure on pricing, which would be good for exporters or, depending on how soon Maersk bought in larger ships, some capacity could disappear.

Kotahi chief executive Chris Greenough said Kotahi was focused on helping keep New Zealand competitive on the world stage, by paving the way for the new generation of container vessels to call, delivering significant efficiencies for exporters and importers. A key aspect of the agreements was the continuing support for the long-term viability of New Zealand's regional ports.

''Reflecting the strong growth of dairying exports from the South Canterbury region over the past three years, it has been possible to resume container-ship calls to the Port of Timaru while also retaining significant volumes through Port of Lyttelton and maintaining, long term, container-ship calls at a number of other regional ports,'' Mr Greenough said.

As part of the Kotahi agreement, Tauranga would replace rebates to Maersk by issuing 2 million new shares to Kotahi, while Kotahi is to take a stake in the Timaru container terminal, which Tauranga bought into last August. Maersk is also introducing a new 4500 TEU service from Tauranga to Malaysia in October.