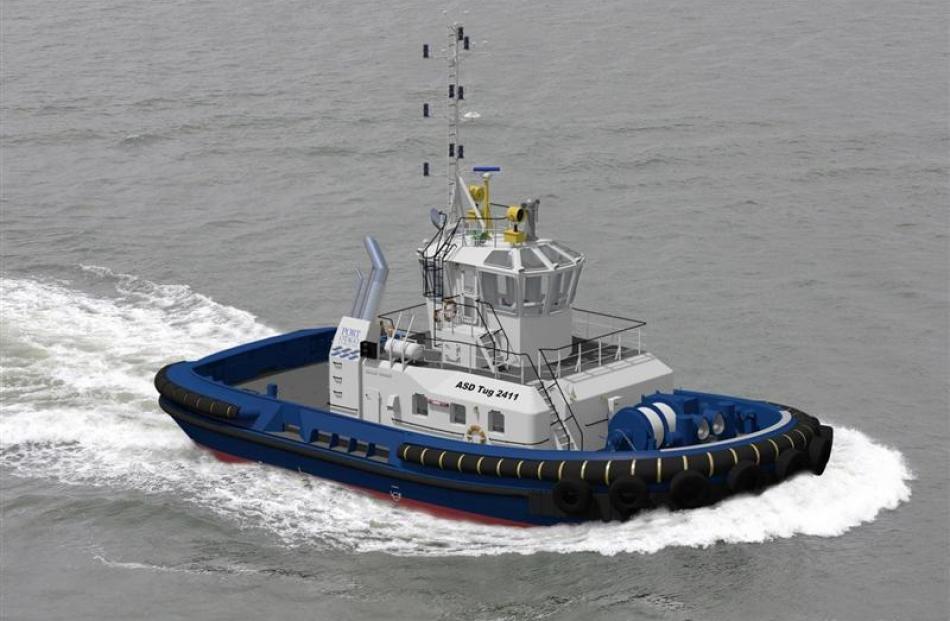 A Damen-made tug similar to Taiaroa, which is on its delivery voyage to Port Otago. Photo supplied.

Port Otago's new $11 million tug Taiaroa is about halfway on its delivery voyage from Vietnam and is due to arrive in Port Chalmers later this month.

Taiaroa's elderly predecessors, Rangi and Karetai, could could see out their days at a Pacific Island port. Taiaroa was built in Da Nang by Netherlands-based Damen Group, which has a specialist four-person delivery crew on board, Port Otago chief executive Geoff Plunket said yesterday.

The 24.5m long, 250 tonne Taiaroa was expected to take about 30 days to get to Port Chalmers and had just passed Papua New Guinea. It was not in range of ship-tracking technology at present and had been hit by poor weather this week and slowed, he said.

''She'll be welcomed in appropriate maritime style,'' Mr Plunket said. Taiaroa was the 63rd of its type launched by Damen and one of four so far delivered to New Zealand clients.

Port Otago's Dunedin-built Karetai and Rangi have been for sale for some time and Mr Plunket said the company was in negotiation with one potential buyer for both vessels.

He said they were in ''excellent condition and had been well maintained''. The potential buyer was undertaking due diligence on the vessels but negotiations had not yet progressed to a contractual stage, he said.

Mr Plunket said the tugs could be attractive to a small port in Australia or a Pacific Island nation that had only a small number of monthly ship visits.

Port Otago's present tug, Otago, arrived in April 2003, having been built in Whangarei for about $7 million. Its predecessor, also Otago, was scuttled in 1500m of water off the Coromandel coast in March 2000. The 44m, 1956 Scotland-built steam-driven tug was sold to Auckland interests in the early 1980s before becoming derelict and scuttled.