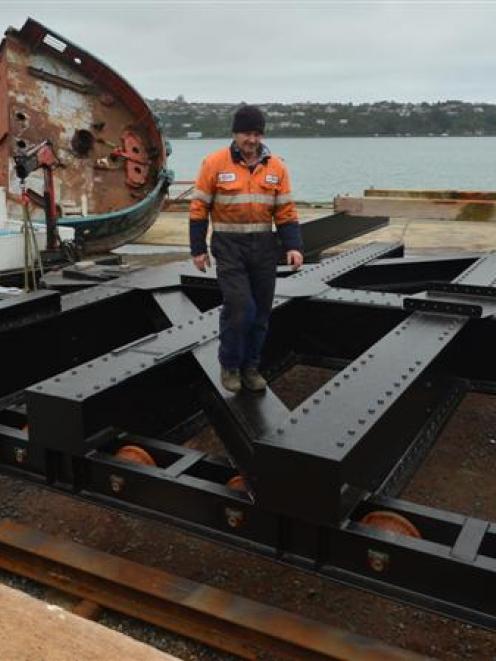 Fitter and turner Robert Butcher, of Action Engineering, works on the new slipway cradle for Port Otago yesterday. In the background is the severed bow of steam dredge Te Whaka. Photo by Peter McIntosh.
A replacement lifting cradle is scheduled to be craned into place at Port Otago's Kitchener St slipway next week.

The replacement, built by Dunedin's Action Engineering, is the slipway's main cradle, which is supported by four others which will be overhauled in the future, Port Otago harbour services manager Allan Sutherland said.

The old cradle had become ''rusted and pitted'' and has already been removed, having been in place since about 1977, about the time the Dunedin-built tugs Rangi and Karetai were launched.

Mr Sutherland said the job posed no technical problems, and the slipway would be able to take vessels of about the same size in future.

He estimated its maximum capacity was Port Otago's dredge, New Era, which is 58m long with an 11m beam and weighs 650 tonnes.

Port Otago is due to take delivery of a new tug, the $11 million Taiaroa, from Vietnam next August, and its dimensions had been factored into the new cradle's construction. Costing around $80,000 and weighing about 17 tonnes, it includes use of old-fashioned riveted steel beams salvaged from the demolition of the High St building formerly occupied by the Otago Daily Times.

Mr Sutherland said the severed bow of the 102-year-old former steam powered historic dredge Te Whaka would also be moved off the adjacent wharf, while the mobile crane was in position.

Efforts to fund and restore the near derelict 324-tonne Te Whaka fell flat after it spent 18 years in Dunedin's upper harbour and it was cut up for scrap in late 2012. The 10-tonne bow section was saved to become a maritime sculpture at the harbour basin.

- Te Whaka was built in 1910 in Glasgow for the Lyttelton Harbour Board, where it served as dredge until 1987 and was laid up until 1993, when it was bought by the Te Whaka Maritime Heritage Trust, in Dunedin.