Food technologist and former gourmet seasonings company owner Darcy Schack has put his craft beer-making skills to good use to create a local version of the fermented sweetened tea kombucha, which is made with probiotic culture and yeast to produce a bubbly drink.

Kiss is attracting new patrons in and around the city.

Kombucha has been brewed for 2000 years and is said to provide health benefits such as improved digestion and immune function.

Mr Schack's organic Kiss Kombucha is now on tap at 50 Otago cafes, Dunedin Hospital and health shops and he has recently taken delivery of an additional 50 dispensers to cope with demand.

He hopes to roll out the additional canisters to cafes and health shops in the coming months. Local cafes such as Ombrellito's say demand is picking up as people look for organic, healthy alternatives to coffee or fizzy drinks. 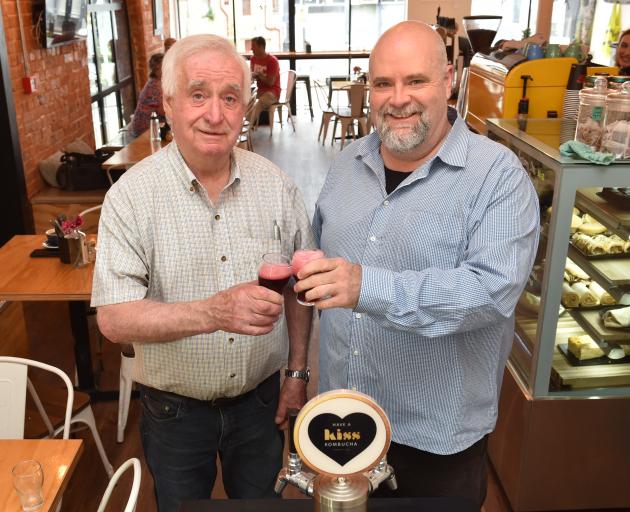 Kiss comes in three varieties, blackcurrant, natural and lemon-honey-ginger, the blackcurrant variety selling at triple the rate of the other two, Mr Schack says.

The on-tap drink averages about 0.2% alcohol, but can be brewed as a gruntier alcoholic drink of up to about 6%.

"We make a fresh, non-pasteurised product so, because it's fermented, if you leave it out in the sun long enough, it will become alcoholic."

Mr Schack, with the help of his father Ernie (78), manned a stall at the recent Dunedin Craft Beer and Food Festival, selling "heaps" to enthusiastic beer drinkers.

He is looking at additional varieties, including a cucumber-and-mint flavour.

Mr Schack, who moved from his home town of Calgary in Canada to New Zealand in 2007, formerly owned and ran gourmet seasonings company Hammerhead Foods.

He started producing kombucha three years ago after struggling with an autoimmune disease, which had dramatically reduced his quality of life.

His sister Holly, who was visiting from Alberta, introduced the family to the benefits of kombucha.

At that stage, trying to balance family, a busy lifestyle and the challenges of running a food business, he could "barely get out of bed", he said.

"I truly thought I was done. I was addicted to opioids for chronic pain so started looking at more natural options for relief."

He also turned to medically prescribed cannabinoids - an active ingredient of cannabis - for pain relief and then, after some research, added kombucha to help bring his body into "equilibrium".

"I'm truly not sure if it was the mix, the properties of the natural products, or what it was but it certainly helped me get back into the land of the living," he said.

Sold on the merits of the product, he decided to make it commercially.

The move coincided with the sale of Hammerhead to local research company Soma Medical Research.

With its backing Mr Schack, a former photographer-turned-food technologist, started importing and distributing the Kiss taps.

"We were really the first people in the local market, so we're breaking new ground. The kegs are able to be reused thousands of times, and use a lot less carbon and power - of the order of 50 times less - removing single-use glass or plastic use.

He and his father are producing about 10,000 litres a week at present, though he reckons that could "easily" increase to 50,000 next year.

"It ticks every box I can think of - including the environment box, which we're really proud of."

He said cafes such as Ombrellito's required a refill every week and a-half, though the strongest demand came from the unit at the hospital.

"We are aiming for around 500 taps around Otago, with health as a major market for us, and we see a lot of opportunities to diversify our offering via the kegs."