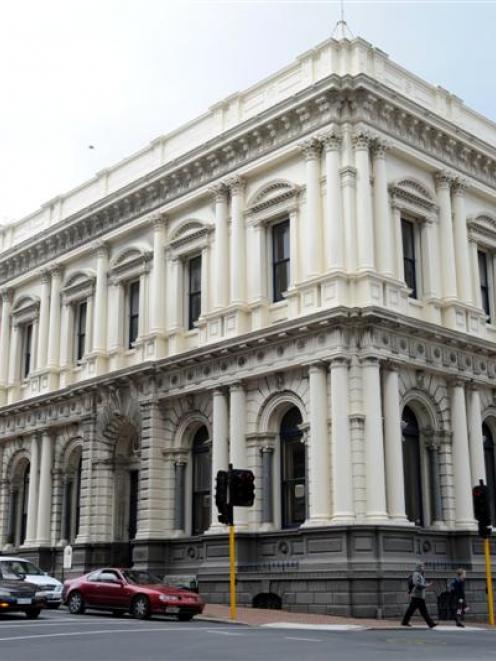 Dunedin building owners Ted Daniels and Wayne Marsh purchased the former bank - a major institution in Otago's gold rush days - in a joint venture a year ago for an undisclosed sum.

The pair have since cleaned out and repaired the bank and adjacent former Canton building, both of which were not entirely weather-proof and were water-damaged.

Mr Daniels said work was continuing on cleaning up the buildings, with no certain plans yet for tenants.

"We'll make it happen; it's a long-term project.

We're not in a great hurry to do it wrong and would rather wait for the right tenant to come along," Mr Daniels said when contacted.

Once tenants were identified, the likelihood was for redevelopment into commercial premises, possibly for retail, offices or restaurants, Mr Daniels said.

The New Zealand Historic Places Trust was assisting in determining what work could be carried out in both buildings, and an archeological and conservation report had been prepared on the Canton, but not yet for the BNZ, he said.

The BNZ has an expansive coffered plaster ceiling which is protected by the historic places trust and is likely to become a feature piece of any redevelopment.

The BNZ building, along with two adjoining premises, was understood to have cost less than the $1.5 million paid by a string of previous unsuccessful developers, and for the previous more than 10 years had been largely idle and was falling into disrepair.

Mr Daniels said a year ago a refurbishment could cost $1 million to $1.5 million, but said yesterday, until a tenant was found and their needs assessed, no budget would be decided for the redevelopment.

Mr Daniels is best known for his ownership of 108-year-old Bracken Court in Moray Pl, which was spectacularly gutted by fire in July 2005 and was rebuilt for about $3 million, while Mr Marsh owns other Dunedin buildings.