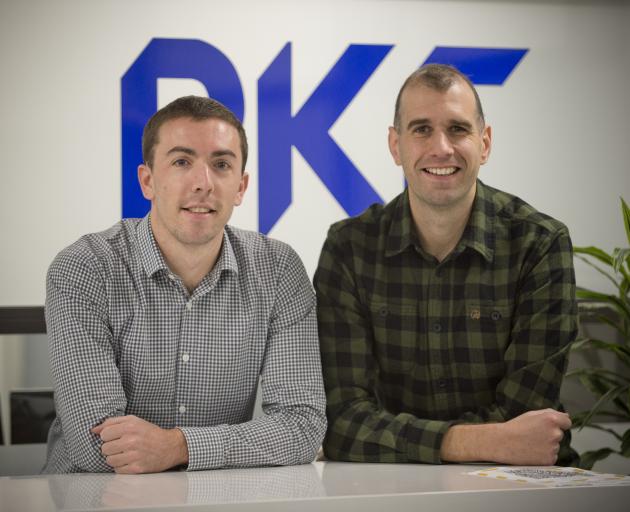 At Saturday night’s test match between the All Blacks and Fiji at Forsyth Barr Stadium in Dunedin, Mr Bredin (36) was assistant referee and Mr Hannon (26) was sub controller. 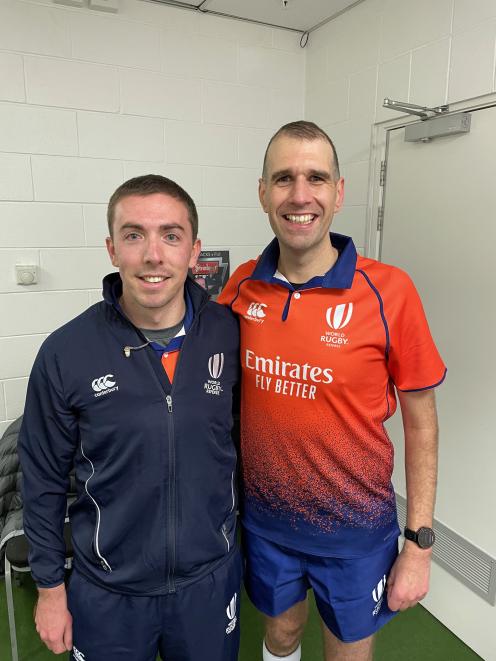 The two men ready to officiate at the game.
Their sporting pursuits made for good conversation ice-breakers with clients at the accounting firm, rather than the more banal niceties around the weather.

Mr Hannon was first to get into rugby refereeing, picking it up in his first year studying commerce at the University of Otago in 2015.

As part of that, he always looked to other sports for peer support and "thinking outside the square" around how to improve himself as an official.

He knew a lot of high-performance rugby referees and they often told him the skills he had from netball were transferable to rugby.

After officiating for the gold medal game at the 2018 Commonwealth Games on the Gold Coast, where England beat Australia by one goal, Mr Bredin was looking for a fresh challenge.

Netball was a lot more structured in terms of qualifications for umpires. He first got involved while growing up in Gore, a town that had now produced five international netball umpires.

Mr Bredin was used to the people element and dealing with conflict, but what he had to learn was the "rugby bit".

He was thrown into the deep end and the third game he refereed was a local premier game. It was testament to the Otago Rugby Referees group that he and Mr Hannon had been able to develop as quickly as they had, he said.

After several years refereeing, Mr Hannon realised there were opportunities, as well as the enjoyment and challenge.

He was named in the national squad this year and would make his first-class debut in the national competition. The ultimate would be to officiate at a test match, he said.

The pair knew each other through rugby, before Mr Hannon graduated and moving to Blenheim for a year.

When Mr Bredin heard he was looking to return to Dunedin, it was "certainly a no-brainer" for him to tap him on the shoulder about working at PKF.

There was a sporty crew at PKF including Alison Glover, who was into rallying, James Nation, a double Olympian hockey player and Peter McCormack, on the board of the Otago Rugby Football Union.

The team took an interest in their sporting pursuits and were "pretty chuffed" to see Mr Bredin and Mr Hannon take the field for the Fiji-All Blacks test.

Mr Bredin also liked to think they were breaking the stereotypical mould of boring accountants sitting behind a desk all day — "that’s certainly not our firm".

Those officiating at games did not do it for accolades. There were only five people in New Zealand refereeing rugby as a job.

"The rest of us are just doing it on a Saturday to help out and for a free beer afterwards, if the club is so inclined and, depending on the result, that’s not always the case," he quipped.

Club rugby did have its challenges around sideline behaviour, but that was the same with other sports.

It was no fluke that many sports were looking for officials.

"It’s hard if you’ve got the next level of referees coming through ... it’s hard to throw them out on a Saturday and keep them safe from spectators. Every parent thinks their 12-year-old is an All Black," Mr Bredin said.

While sport needed to have its passionate supporters, "you don’t want it to be at the detriment of people’s wellbeing and general human kindness", he said.