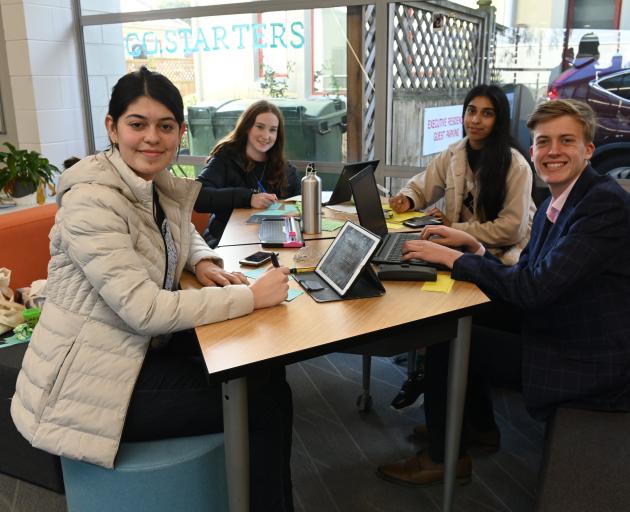 Working on their business presentations during a Latin America Centre of Asia Pacific Excellence session at Startup Dunedin are (from left) Gabriela Navia, of Auckland, Tara Lingard, of Hamilton, Manmeet Singh, of Auckland, and Ethan Mackay, of Kapiti Coast (all 17). PHOTO: LINDA ROBERTSON
A group of secondary school pupils have spent their school holidays learning about Latin American business.

Young Enterprise Scheme(YES) in partnership with Victoria University’s Latin America Centre of Asia-Pacific Excellence (LatAm CAPE) have led a group of 16 years 12 and 13 pupils from across New Zealand.

The aim of the trip was to develop young New Zealand entrepreneurs’ knowledge and awareness of Latin America.

Before Covid-19, the programme took students to South America on a tour but now focuses on Latin American business in New Zealand.

The 10-day programme started in Hamilton last week and has travelled to Wellington and Dunedin visiting businesses which operate in Latin America.

The group arrived in Dunedin on Tuesday night and met AbacusBio, Fisher and Paykel, Animation Research, TracPlus and ADInstruments.

‘‘Everyone knows that New Zealand is such a small country and we have to export to survive.

‘‘If all of our business is in Asia or if it is all in Europe it is not going to be sustainable so we really want people to think about Latin America as our neighbour across the Pacific,’’ Ms Chang said.

The Latin American community was one of the fastest growing migrant communities in New Zealand which meant it was becoming more relevant for New Zealand to do business and engage with Latin America, she said.

Over the week, students had to develop a business plan which was presented to a panel of judges yesterday afternoon.

The programme finishes later this afternoon.