Tables may turn for home audio 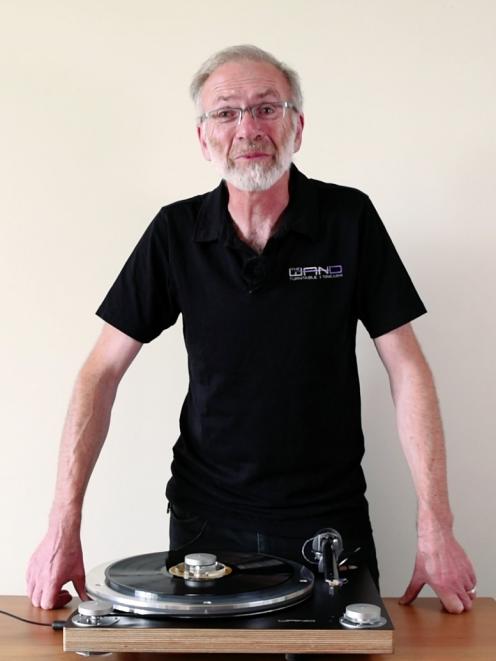 Good vibrations ... Simon Brown stands with the Wand Tonearm and Turntable combination he has been fine-tuning in lockdown. PHOTOS: SUPPLIED
A Dunedin turntable maker should have been on his way back from showing off his device at a major US audio show last weekend.

Instead, Simon Brown has been stuck at home due to the Covid-19 pandemic.

He has been using the silence of lockdown to fine-tune his record player with the help of a quiet city.

‘‘I had one thing that wasn’t quite so satisfactory about it ... the noise was much more loud than I wanted.

The Dunedin product designer was set to be part of a demonstration room at AXPONA, the biggest hi-fi show in North America that was meant to be held in Chicago last weekend.

Mr Brown was also going to give a public talk there about vinyl and how design considerations affect it.

Instead, he would present webinars from his  home.

‘‘I am passionate about the issues of designing for the effects of sound vibration when what you are dealing with is very, very small, at the sub-microscopic level,’’ Mr Brown said.

In 2011, he launched ‘‘The Wand’’ unipivot tonearm and had since built a record player to go with it.

He said he was cognisant of the difficulty  industries such as tourism and hospitality faced due to the outbreak, but businesses like his — making items people could enjoy at home — could be set to benefit.

Mr Brown sells ‘‘The Wand’’ via his website and through distributors around the world.