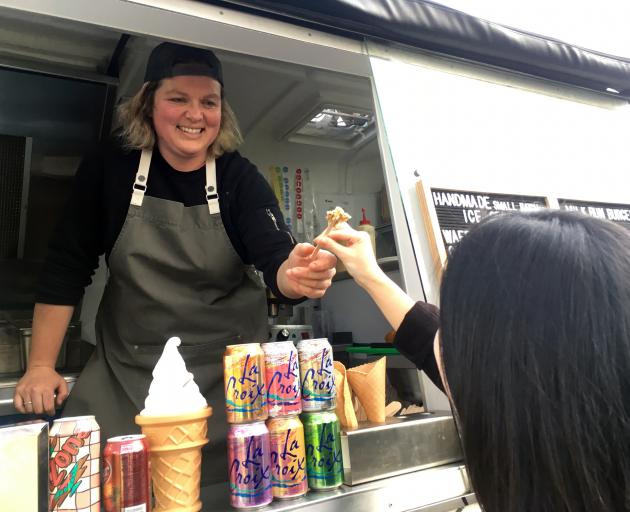 Dunedin is working up an appetite for food trucks serving fancier fare.

Patti’s & Cream owner Olive Tabor said people were starting to realise more food trucks in Dunedin were serving ‘‘restaurant quality food’’ rather than the traditional deep-fried fare, such as hot dogs and chips.

After working seven years in Nova Cafe, she decided to ‘‘go out on my own’’ to ‘‘test a concept’’ of selling burgers and small batches of handmade ice cream, using ingredients from Otago.

She wanted to own a ‘‘1970s-style milk bar’’ but decided to buy a food truck, rather than lease a shop.

A truck posed a smaller financial risk and allowed her to open sooner, rather than waiting for a shop in a suitable location to become available, Miss Tabor said.

A ‘‘great concept’’ for an eatery could fail if opened in the wrong location, she said.

She finished up as the general manager of Nova in June last year and bought a 1984 Bedford CF panel van from Oamaru two months later.

The van was a former police vehicle, used as a ‘‘paddy wagon’’, and was transformed to an ice cream truck in the 1990s.

She refitted the van and named her business Patti’s & Cream.

The name was a nod to the sale of burgers and ice cream and of her being a fan of American singer-songwriter Patti Smith.

She began trading from the truck in the lower Octagon for the ‘‘Ed Sheeran weekend’’ in March.

On the second day of trading, she sold 50 litres of ice cream.

The first days of the business were ‘‘intense and super challenging’’ but being busy allowed her to improve her operation under pressure.

‘‘You learn the quickest when it is busy — what I learnt in five days could have taken me three months.’’

Since opening she had discovered ice cream could be sold in Dunedin if it was 6degC or warmer.

‘‘We are a cold climate but we enjoy ice cream all year round.’’

She traded in spots across Dunedin and delivered 500ml pots of ice cream orders across the city on Thursday nights.

She teamed up with the owner of food truck Citizens to trade in suburbs such as Macandrew Bay and Port Chalmers on Friday nights. The trucks attracted hundreds of people on a Friday night, she said.

The Dunedin City Council had been ‘‘fantastic’’ to work with, she said.

She expected more food trucks to open in Dunedin as word spread of the quality of food being served, she said.

‘‘Dunedin people are starting to get it.’’