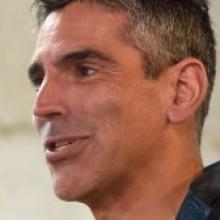 Addressing a group of farmers in the Paterson family's woolshed at Gimmerburn, Global Merino founder and chief executive Jose Fernandez outlined his business.

The company uses merino wool in a variety of ways. Some of its textiles are 100% wool, others are blended and some are unique constructions. Core customers are outdoor brands like SmartWool, Patagonia, New Balance and Ibex, along with sports specialist brands catering for cyclists, skiers and runners.

The company's market position was creating products that were end-use specific and there was a goal of optimising athletic performance, Mr Fernandez said. The performance requirements were determined and the fabrics engineered to meet them, using merino wool as a key ingredient.

Understanding where Global Merino's wool came from and how it was managed was very important, he said.

He was sourcing wool through SH8 Merino Ltd, having previously met Simon Williamson and Kirsty Rutherford, from Glenbrook Station, near Omarama.

Unlike Norwegian wool clothing brand Devold, Global Merino did not have a 150-year history in the industry. It was a newcomer that had grown very quickly.

Product quality and innovation was the reason it was in business - ‘‘simply because we're better than our competition'', he said.

Mr Williamson said the wool for the Global Merino contracts was predominantly being sourced from the Mackenzie area. As the business grew, so too was the quantity of wool required, and he was excited about its future.

‘‘I think it's leading edge stuff - we've never seen that before. Although he [Jose] hasn't been going for a long time, the innovation he's put into the fabric is incredible.

‘‘Some of the stuff that's coming out now ... and how the business is growing quickly is amazing. That's the future of wool,'' he said.