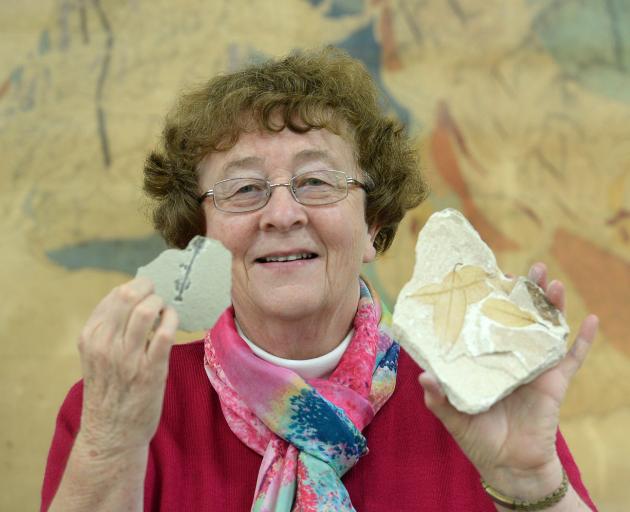 University of Otago geology department Associate Prof Daphne Lee holds two of hundreds of examples of Foulden Hills diatomite fossils; a fish (left) and large leaves. Photo: Linda Robertson
Scientific access to one of New Zealand’s "pre-eminent" fossil sites at a proposed diatomite mine in the Foulden Hills near Middlemarch, in Otago, has been assured.

Dozens of new species of plants, insects such as beetles, ants and termites and even fish have been identified at the diatomite mine since 2003, where Malaysian-owned Plaman Resources is readying to resume mining in the near future.

It is a rare collaboration between miners and scientists, where the work of the former uncovers the fossil targets of the latter.

University of Otago geology department Assoc Prof Daphne Lee described the Foulden Hills site as  one of the most important in the southern hemisphere.

"This is New Zealand’s pre-eminent fossil terrestrial site of the Miocene age and is most impressive . . . there are few others like it. A similar site in China is essentially a museum now," she said.

With the 2015 purchase of the mine by Plaman Resources, a question mark evolved over continued access to the important site for university geologists.

Plaman Resources trades under Plaman Global, and its general manager for New Zealand, Craig Pilcher, when contacted,  said there was no intention of restricting access, so long as health and safety and continued mine operations considerations were met.

"The mining industry needs to be supportive of education of young people. Any mines I have controlled in the past have always granted access to anyone who is interested, for the right reasons," Mr Pilcher said.

The diatomite mine at Foulden Hills (at right of picture) when it was being developed in 2012. Photo: Supplied
However, she said since excavations began in earnest from 2003, her research team had collected more than  100 new species of insects, 30 different flowers, about 100 species of leaves and hundreds of fish specimens, belonging to two species.

Prof Lee estimated half of the fossil species which had been found so far at Foulden were now extinct.

Also found had been seeds, fruit and fossilised pollen which were removed from flowers, and mounted for further study.

The site is privately owned and there is no public access. About six to 10 times a year, Prof Lee takes students and colleagues to the site, where up to 20kg of diatomite samples are removed.

The  layers of the almost featherweight diatomite, of about 0.2mm-2mm thick, are then prised apart to reveal the fossils.

"Colleagues from all over the world are working with specimens from there," she said.

She said another important aspect of the Foulden Maar (volcanic crater lake) was its capturing of climate records from the distant past, showing different periods of the La Nina versus El Nino weather events, including in times when the climate was much warmer than the present.

Analysis of the diatomite laminations provided a 120,000-year-old record of climatic fluctuations  and some data was still under investigation by an international team of climate scientists.

She described Maars typically having "exceptional" levels of preservation of organic material, which ranged from microscopic algae, aquatic and forest-dwelling insects, fish, birds, mammals and reptiles.

It was possible to reconstruct entire ecosystems from the past, Prof Lee said.

"The surprising find has been insects, which we didn’t expect."

While there are at present about 11 ant species in New Zealand, Prof Lee said a further 10, mostly extinct, species had been found at Foulden.

Records of spiders have become one of the newest additions to the overall finds. Prof Lee said the world’s oldest known galaxiid,  or whitebait, was found at the site, and also the oldest known fossilised eel in the southern hemisphere came from the Foulden Maar.

"It’s the only pre-ice age Maar in the southern hemisphere which has been fully drilled [to its base]," Prof Lee said.

The core drill samples taken in 2010, to a depth of 183m, showed the mine site was a small but deep volcano; with radiometric dating revealing it was formed about 23 million years ago.

The volcano, about 800m to 1000m in diameter, formed into a lake which,  over the following 130,000 years, filled with diatomite from a floating, silica-bearing microscopic plant which died off annually, layering the lakebed.

"What we’re eventually hoping to find is birds and animals," Prof Lee said.

In 1997, a fossilised fragment from the right lower jaw of a small crocodile was discovered near St Bathans, possibly 16 million years old, the first of its kind in New Zealand.

Plaman’s Mr Pilcher said he expected the mining project would be "a very rare opportunity" for the University of Otago  to  be involved in far more technical studies than just the previous work which was only near surface and core drilling work.

However, Prof Lee was adamant that given the international importance of Foulden Maar as a paleontological site, it was essential part of the overall diatomite deposit be preserved in perpetuity.

Mr Pilcher said he was pleased Prof Lee was supportive of the mining project and said Plaman would be "very supportive" of the university.