No looking back after diving into retail dream 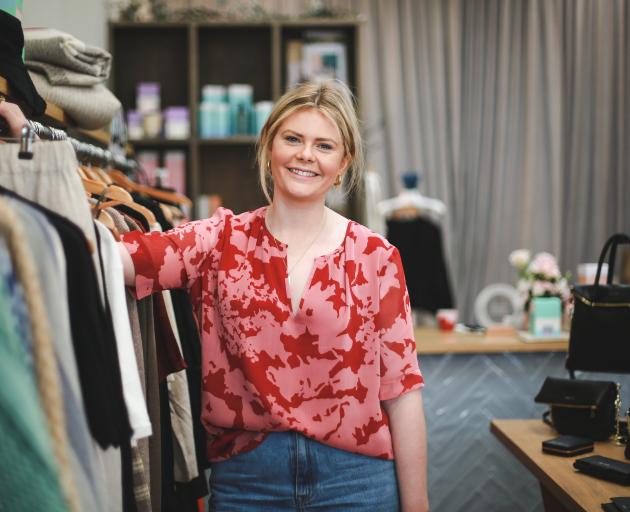 Young Oamaru businesswoman Becky Dennison received the award for best customer service personality at last week’s Oamaru Business Collective Awards. PHOTO: REBECCA RYAN
Retail can be a tough game, even more so during a global pandemic. Business editor Sally Rae talks to a young Oamaru retailer about the secret to her early success.

‘‘If you want something to work, you have to do the work. It’s not going to just happen magically because you want it to.’’

Oamaru retailer Becky Dennison might be young but, in many ways, she shows maturity beyond her years, demonstrating a bent for business and a passion for fashion.

Winning the award was exciting; while the bubbly and focused businesswoman loved her job, it was also nice to see acknowledgement from others in the community for that service, she said.

From a young age, Miss Dennison wanted to own a shop, she said. Growing up on a Hilderthorpe farm, she showed an entrepreneurial spirit, taking lollies from the pantry, cutting them up and selling them to her parents.

Living near the sea, she would drill holes in paua shells and sell her products to her parents and teachers, and she would have flower stalls in the garden — again, her good-natured parents Chris and Kay were the customers.

Miss Dennison candidly acknowledged she struggled at primary school, including with reading and writing.

While she loved being around people, the play and the connections forged, she was unable to concentrate in class and was disruptive in the classroom, and she felt she was ‘‘really dumb’’.

A breakthrough came when she was 10 and diagnosed with attention deficit hyperactivity disorder (ADHD), which can cause above-normal levels of hyperactive and impulsive behaviours.

People with ADHD may also have trouble focusing their attention on a single task or sitting still for long periods.

Her secondary school years at Craighead Diocesan School in Timaru were better, she said, as she could finally concentrate and she found subjects she was passionate about, including economics.

On leaving school, she decided to study economics at university. Having always been a ‘‘people person’’, loving both people and social interaction, she admitted that was ‘‘going against the grain a bit’’.

She questioned whether she wanted to be sitting in an office all day crunching numbers and, after a year and a-half, she changed to social work which was more up her alley.

Though she had previously struggled with reading and writing, she was awarded first-class honours for her dissertation.

She practised social work for two and a-half years and learnt a lot from the profession, including about having courageous conversations and standing her ground.

Many people commented that social work and owning a designer boutique could not be any more different, but she believed that in reality the skills were the same. It was about nurturing relationships and helping people — retail was ‘‘just a lot less stressful’’.

Miss Dennison had worked at clothing boutique Mrs Hyde during her university holidays and she also used to babysit owner Mary-Jane Hyde’s children. She was also her first employee.

When Ms Hyde approached her to see if she would be interested in buying the business late last year, it ‘‘just seemed right’’, Miss Dennison recalled.

The transaction happened in about 10 days. At that time, she was self-employed, selling accessories online through her small business Bettys, as well as doing social media consultancy and selling floral designs.

Both her family and her partner Kris, an accountant, were supportive, although her parents did point out it was a risk, given the retail scene and Covid-19, and that it would also be a big tie.

But ultimately, being able to buy the business was about hard work and taking a risk.

‘‘I knew it would be fine, it’s gone way better than I expected it would, both online and in-store,’’ she said.

That was reassuring for the young businesswoman, who will celebrate her first anniversary in the lower Thames St store in December.

Asked about the key to success in a challenging retail environment, Miss Dennison said it was about being genuine.

‘‘It’s just about being yourself, being your true self and going the extra mile for people. Also making them feel really welcome and comfortable.’’

She was conscious — having experienced it herself — that staff at some designer boutiques tended to look potential customers ‘‘up and down’’, and that had been in the back of her mind.

‘‘I don’t want anybody to walk in and feel they are being judged.’’

Social media had been an important tool for her and she often filmed herself trying on new garments and highlighting different looks.

It was all about personalising the experience.

Having an online platform was beneficial, particularly during a pandemic. During lockdown, if she had not had that, then she would not have been able to do anything, she said. She was now selling all over the country and to Australia.

During the Covid-19 Alert Level 4 lockdown, she admitted, she was probably busier than if she had been in the shop — which also let to a stockpile of parcels to go out when the level was reduced, as people looked to online shopping.

Many of her online shoppers had never been in the store but they felt like then knew both the store and her.

Showing herself trying on the clothes also gave people a gauge for what they looked like on an average person and that was helpful, especially when they were committing to a significant purchase, she said.

With Covid-19, Miss Dennison believed people were more aware of how their spending decisions could positively affect the local community and they were ‘‘definitely prepared to spend a little bit more’’ if it meant supporting local.

Also, with people unable to travel, they were spending that money on the likes of house renovations — and clothes.

Doing business in a provincial town like Oamaru had its pros and cons. It had a supportive business community and, in general, Miss Dennison felt she would rather be in business in a small town than a big city.

Having connections with people also meant she got to know their styles. Mrs Hyde had a strong rural clientele with an appreciation for natural fibres such as linen and wool, and wanted to support those industries. People were also prepared to invest in leather goods, coats and knitwear.

Miss Dennison strived to focus on timeless fashion. When it came to her own style, she called it ‘‘preppy grunge’’ — she liked tailored, classic elegant garments but also ‘‘something a wee bit edgy as well’’.

Owning a boutique was definitely a problem for someone who loved clothes, she laughed.

‘‘The wardrobe is expanding almost every week.’’

Business was all-consuming; it was not until she started her small Bettys business that she realised just how consuming it was. It was something that was on her mind all the time.

But a work ethic was something that had been instilled in her.

‘‘I read this thing a few months ago, it said ‘people who are successful don’t get there by hoping to be successful’. It’s hard work and it’s stressful,’’ she said.

In retail fashion, there were unknowns; she could buy a garment thinking it might sell well, and it might not, or she might not buy enough of a garment which ended up proving popular.

Clothing had been a longtime passion for Miss Dennison, who had loved dressing up from a young age. It was probably when she went to university that she started getting more interested in fashion, she said.

‘‘It’s a form of self-expression.

‘‘When you feel like you look good, you do have a much better day. It’s quite magical when someone puts something on, you see it on their face, they feel better.

‘‘It’s not just a dress, often it takes trying something on to realise that. I’m selling confidence I think ... and a sense of feeling special,’’ she said.

As her first anniversary loomed, Miss Dennison said the time had gone so fast and she had no regrets.

‘‘I probably just wish the opportunity came up sooner.’’

But she also acknowledged that her previous roles were ‘‘all part of the story’’.

‘‘Without one of those journeys, I wouldn’t be here. It all links up together,’’ she said.

‘‘It’s really quite reassuring and settling [when] you find that thing and know it’s your thing. It’s like this is my thing,’’ she said.

She acknowledged leaving a professional career to work in retail caused the odd raised eyebrow.

‘‘I couldn’t care less about that now because I enjoy it,’’ she said.

Asked what advice she would give to her younger self, Miss Dennison said ‘‘don’t worry about what you can’t do’’.

‘‘Worry about what you love to do and focus on doing that well because I think I got hung up on what I couldn’t do.’’

She also realised that being able to interact and engage with people was a skill in itself and that was a key in the retail sector.

‘‘People can tell if you’re genuinely interested in helping ... or if you’re paid to do it.’’

When it came to her future vision for Mrs Hyde, Miss Dennison said she would like to have an online shop, almost like a separate shop to her retail space, that was ‘‘constantly ticking away’’.

Expansion was also possible as she would love to have a bigger space to accommodate the brands she stocked, and she was also keen to tap into not only the wider domestic market, but also international ones.

When it came to customer interaction, she had high standards and that was something she talked to her staff about. While she had thought about setting up a shop in another town, ‘‘I can’t be two places at once’’.

Asked who she was inspired by, Miss Dennison said she followed and interacted online with a range of New Zealand boutiques who were also supportive.

Most people in business were older than their mid-20s, so that was another challenge.

But being in retail was also quite a social experience — ‘‘I’m not sitting there crunching numbers’’ — and ultimately it was fun.

‘‘It just me being me, surrounded by beautiful things.’’