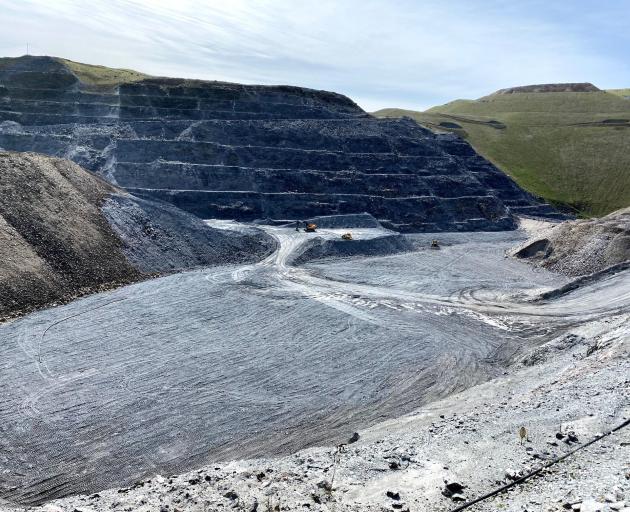 Early works at the location of the Golden Point underground portal at the Macraes gold mine, late last year. PHOTO: SUPPLIED
Oceana Gold chief executive Michael Holmes says 2021 and beyond is a "very exciting" period for the company, including the new underground development at Macraes mine in East Otago.

The company recently released its full-year financial results for the year ended December 31, 2020, and provided a multi-year outlook of its business.

Fourth-quarter revenue increased nearly 72% quarter-on-quarter, reflecting higher gold sales from Haile and Macraes and the resumption of production at Waihi.

For the full year, the company generated $US500million ($NZ683.6million) in revenue. That was down from $US651million in 2019, primarily due to limited sales from its Didipio mine in the Philippines and lower annual production from the Waihi development of Martha Underground, both partially offset by a higher average gold price received.

For the full year, the company recorded a net loss of $150million which included a pre-tax impairment charge of $80million in relation to the uncertainty of timing of a restart at Didipio.

Full-year consolidated production was 301,675 ounces of gold, including fourth-quarter production of 99,155 gold ounces, a quarter-on-quarter increase of 57%.

In a statement, Mr Holmes said Oceana Gold had one of the "premier growth pipelines" in the industry, including bringing three new underground mines into production over the next three years.

Martha Underground was already producing, first production at the Golden Point underground at Macraes was expected in the fourth quarter of this year, and development at the Haile underground, in South Carolina, was expected to begin in the second half of the year.

Those three projects alone were expected to deliver more than an 75% increase in production relative to 2020 at decreasing costs and increasing margins.

Portal development for Golden Point Underground, pre-stripping of the Deepdell open pit and expansion of the Fraser’s open pits, including Frasers West and Gay Tan pits, all began at the end of fourth quarter 2020.

Those projects were expected to extend the mine life at Macraes to 2028, with forecast of production of 1.1million ounces over the period. GPUG was expected to commence production in the fourth quarter of 2021, supplementing, and eventually replacing, underground production from Frasers Underground, which was expected to conclude in the second half of 2022.

Macraes 2021 capital programme was focused on progressing the mine life extension projects.

It expected to invest $10million to $15million in growth capital, primarily attributable to GPUG portal development.