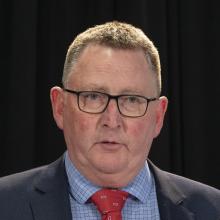 Adrian Orr
The Reserve Bank has lifted the the cost of borrowing and signalled further hikes are on the way.

Yesterday, it lifted the official cash rate (OCR) by 25 basis points (bp) to 1% in its first monetary policy statement of the year.

University of Otago department of economics senior lecturer Dr Murat Ungor said yesterday’s lift was not surprising, and it was in line with expectations.

It was clear from the bank’s statement the OCR would continue to rise over the course of this year.

Under "normal circumstances" it would be lifted by 25bp each time, but if the tensions between Russia and Ukraine worsened the bank would have to look at 50bp in April or May.

That was because Russia was one of the world’s largest oil and gas manufacturers, and it came at a time when the world energy market was struggling to meet demand.

Yesterday, oil prices were nearing $US100 ($NZ148) a barrel, some forecasters predicting that to increase to at least $US120, if not $US150 a barrel, if the tensions continued.

That had a flow-on effect for New Zealand households because petrol prices increasing caused inflation to go even higher, Dr Ungor said.

"That will be when the Reserve Bank will have to look at a 50bp hike," he said.

MortgageMe director Daryl Taylor, of Dunedin, said banks would likely pass on the full 25bp to their borrowers.

Banks had already adjusted their pricing for one- and two-year fixed interest rates in the past week in anticipation of yesterday’s decision.

There would be an increase in interest rates for those periods, but it would have little effect on borrowers fixed past that.

"The further you fix for, the less effect it will have."

As the OCR increased throughout this year, banks would likely increase their interest rates unless there was a "major economic catastrophe", Mr Taylor said.

Forsyth Barr investment adviser Damian Foster said the NZX had little reaction to the OCR decision, probably because the market had expected it.

"Everyone expected a 25bp increase and that is exactly what has happened."

The market was most likely more focused on the crisis in eastern Europe for where it would be heading in the short term.

The next OCR decision is in April.