University of Otago polymer expert Associate Prof Steve Moratti (left) and professor of chemistry Lyall Hanton have both been working on the sinus gel project for the past 12 years. Photos: Gerard O'Brien
A wound-healing sinus gel co-developed by the University of Otago is set to go on sale in the United States next year after the powerful US Food and Drug Administration (FDA) gave its regulatory clearance.

The patent-protected formula for the gel, Chitogel, is made from two chemical compounds produced from chitosan, a natural sugar polymer derived from high-grade crab shells from an undisclosed overseas source.

The 12-year-old multimillion-dollar project has, over time, had 20  scientists and researchers working on it, from the universities of Otago and Adelaide.

While focusing on capturing up to 30% of the US sinus operation market, the company, Chitogel Ltd, is hoping to expand into other post-surgery arenas and other offshore markets.

Research team member and professor in chemistry at Otago university Lyall Hanton said the FDA approval meant Chitogel could now move towards its goal of capturing 20% to 30% of the US market by the end of 2020. 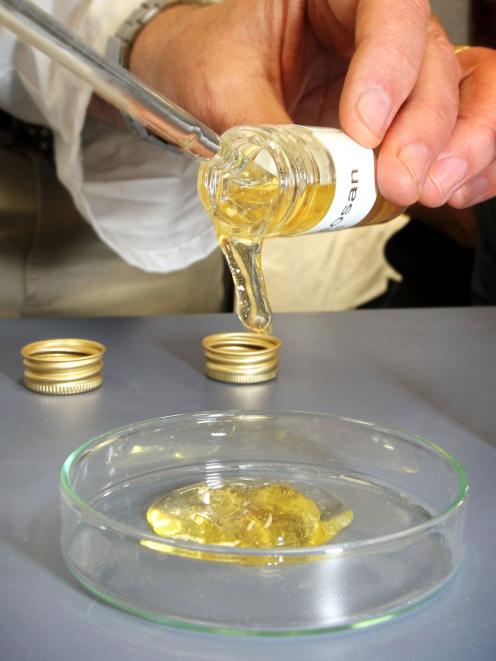 Pouring a gel sample.
"I’m delighted that something we have worked so long and hard on is finally able to make a fundamental difference to people recovering from this type of sinus surgery," Prof Hanton said.

"It’s fantastic to finally get this to the market."

Chitogel chief executive Phil Royal expected the first commercial shipments of Chitogel to begin in the middle of next year, noting several pharmaceutical companies were at present trialling the gel as part of advanced negotiations for its distribution.

"This FDA clearance represents a huge milestone for our young company and the medical world ... outcomes for surgeons and their patients will be significantly improved from using Chitogel," he said.

It has been reported a heads of agreement was signed this week with an unnamed US pharmaceutical company for distribution of the gel.

Mr Royal said Callaghan Innovation, the Ministry of Business, Innovation and Employment,  leading clinicians and New Zealand scientists had been involved over the years.

Endoscopic sinus surgery was one of the most common surgical procedures and was performed about 500,000 times each year in the US alone.

Those sorts of post-operative complications led to about 15% of sinus surgeries having to be repeated.

Chitogel had an extensive portfolio of patents around the world covering innovative treatments based on the formula of highly complex carbohydrate chemistry, and Mr Royal said the company would be seeking to gain regulatory clearance in markets beyond the US.

Seeking approvals for New Zealand and Australian distribution was being considered.

While the FDA has approved its use for ear, nose and throat surgeries, the company will be submitting applications to secure FDA clearance for post-surgery use in spinal and abdominal surgeries as well. Some trials have already started.

The gel is produced at the company’s new manufacturing plant at Lower Hutt’s Gracefield Innovation Quarter, near Wellington. Several kilograms are expected to be produced monthly.