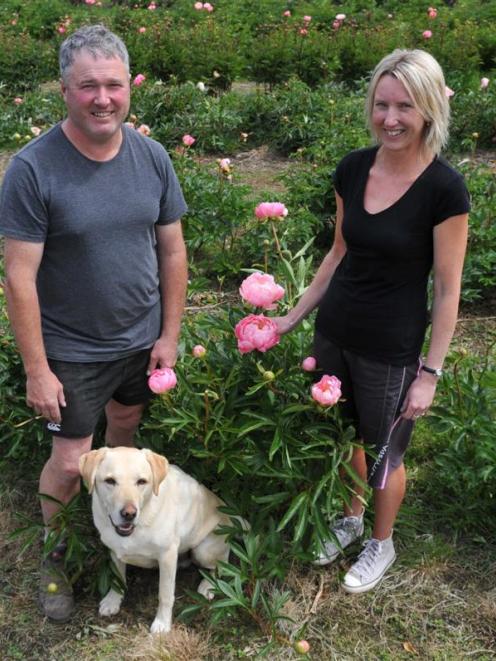 They trialled gentians, viburnum and peonies before deciding peonies were best suited to their property, near Mosgiel.

Peony plant numbers have since swelled from 2000 to about 10,000, with plans for more plantings.

The big, blowsy blooms are predominantly destined for the export market but a small number are sold at the couple's stall at the Otago Farmers Market.

They had started picking over the past couple of weeks and were shipping coral paeonies to the United States this week in time for Thanksgiving.

About 40% of their crop is destined for the US, while the rest is sold to Asia and Australia.

The six-week peak picking period was due to ''start any time now'', finishing just before Christmas, Mr Whitson said.

Their business, Janefield Paeonies, is a medium-sized commercial operation.

At one stage, there were more than 200 commercial growers and the Whitsons used to pack for 12 growers around the Dunedin area.

Now, they are the only ones doing it for export in the area.

Mr Whitson estimated about 70 growers were exporting, most in the South Island, as the cool climate suited peonies.

When the couple added a hydroponic operation nine years ago, growing salad greens, herbs and micro greens, they both became full-time in their business.

Mr Whitson was previously a butcher, and Mrs Whitson a dispensary technician, but it got to the point where the flower side was getting busier, and they were busy in their own jobs.

They added the hydroponics to give them a ''backstop'', given the flower operation was so dependent on the weather.

While their business was small, it was going well, Mr Whitson said.

Peonies were easy to grow in home gardens but, when it came to commercial cut flowers there was ''a lot to it'' and it was hard work, he said.

That was largely due to the weather, pests and diseases, and also any freight issues that might arise, given the flowers needed to end up at their destination looking perfect.

Mr Whitson is the immediate past-chairman of the New Zealand Paeony Society, having served in the top role for eight years.

There were challenges during that time, including the temporary stalling of exports of cut flowers to the United States, following the discovery of light brown apple moths in a container of flowers in 2008, and he had been heavily involved with getting clearance to export again.

He had also been a driver in introducing a compulsory levy from peony growers and the society was the only cut flower group in New Zealand to have such a levy.

Growers faced challenges with the high dollar, he said.